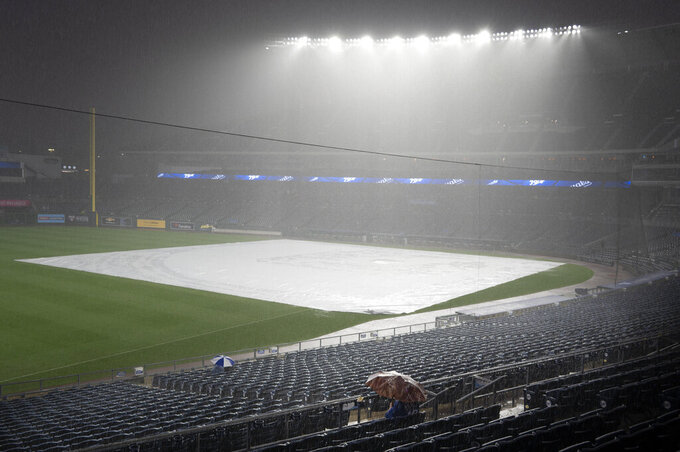 A few fans sit through a deluge at Kauffman Stadium that forced a rain delay in a baseball game between the Kansas City Royals and the Chicago White Sox, Friday, Sept. 3, 2021 in Kansas City, Mo. (AP Photo/Reed Hoffmann)

KANSAS CITY, Mo. (AP) — With a decade left on their lease at Kauffman Stadium, the Kansas City Royals are evaluating their options and owner John Sherman said Tuesday one of those could be a new downtown ballpark.

The Royals are tied to the 53-year-old stadium, named after founder Ewing Kauffman, until 2031 under terms of a public-private partnership 15 years ago that helped to fund $250 million in renovations to the quaint but aging ballpark on the outskirts of town.

But the club must make a decision in the next couple of years to press on with more renovations at Truman Sports Complex, which is also home to Arrowhead Stadium and the Kansas City Chiefs, or look elsewhere. The design and construction for a new stadium typically takes up to five years, and securing the necessary funding can sometimes take just as long.

“I get asked this question all the time about where we're going to play in the future,” said Sherman, who bought the club from David Glass for $1 billion in November 2019. "Since the day we acquired the franchise, trust me, we've had a revolving door of people bringing us lots of ideas, some that have been on the shelf for a long time.

“We've spent our time listening but we've also thought of the future of where we play,” Sherman added. “We're in a good spot here in Truman Sports Complex but we need to start thinking about our plans for a stadium.”

There was a major push in the early 2000s for a new downtown ballpark, near where city officials managed to build T-Mobile Arena, the home of the Big 12 Conference basketball tournament and other events. That has since served as the cornerstone for the Power & Light District, a robust area of bars and restaurants, and has helped to revitalize downtown Kansas City.

But those plans ultimately were shelved in favor of remaining at Kauffman Stadium, whose Space Age-design, glittering outfield fountains and dazzling lights have made it popular among fans and players alike.

In April 2006, voters in Jackson County approved a sales tax increase to fund renovations to Kauffman and Arrowhead stadiums while tying the Royals and Chiefs to the city for the foreseeable future. And while the renovations did much to modernize the facilities, it couldn't help the fact that both are located well outside of downtown Kansas City.

Their location makes it difficult to reach the stadiums, particularly for baseball games that occur during the work week, and traffic is often a nightmare when there is a large crowd. There also is no room to build out surrounding areas with the kinds of bars, hotels and restaurants.

“Wherever we play,” Sherman said, “the criteria will be that the process will result in meaningful community impact that is real and measurable. It will result in economic growth and economic activity that benefits this region in real and measurable ways, and I think about quality of life. ... The other criteria we need to have is a positive impact on quality of life.”

Sherman has a vested interest in Kansas City. He graduated from Ottawa University in nearby Ottawa, Kansas, before he established a series of energy companies across the Midwest. All along, he called Kansas City his home.

“It's frankly hard not to go public about this. I get asked this literally everywhere I go,” he said. “We're having some thoughts about it and we want to be more transparent about it, and we want to start to get more feedback from groups in the community. How do they feel about the concept and the criteria I gave? The community impact, the economic growth and the quality of life for people in this region? If we can make that work, and the math works, a new ballpark is a possibility.”