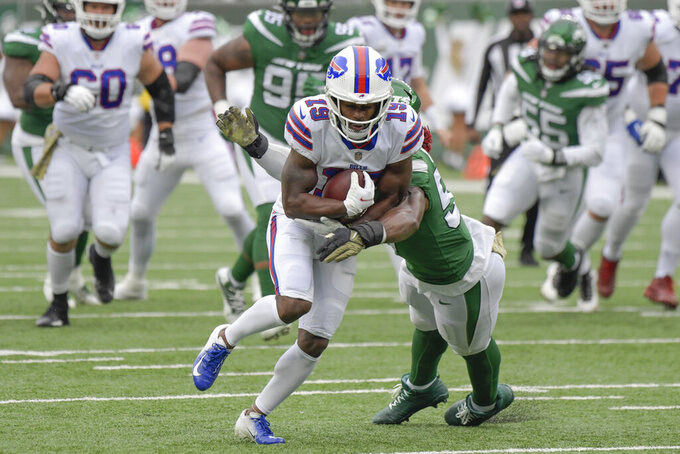 Buffalo Bills' Isaiah McKenzie runs with the ball during the first half of an NFL football game against the New York Jets, Sunday, Nov. 14, 2021, in East Rutherford, N.J. (AP Photo/Bill Kostroun)

The Bills listed receiver and returner Isaiah McKenzie as a healthy scratch.

Ingram entered the game as questionable because of a knee injury that limited him in practice this week. Fullback Alex Armah is a healthy scratch as the Saints have decided to go with a backfield of Tony Jones Jr., Dwayne Washington and newly acquired Adam Prentice, who was elevated from the practice squad.

Armstead, who also was listed as questionable after missing the last two games with knee and shoulder injuries, had returned to practice this week.

Reserve quarterback Ian Book was the other Saints scratch.

All of the Bills' lineup scratches were healthy players.

McKenzie, who fumble a kickoff return deep in Buffalo territory last week, is inactive because of Marquez Stevenson's return to the lineup following his activation from injured reserve.

Running back Zack Moss has been scratched with Matt Breida getting a chance to consolidate his recent production as both a runner and receiver out of the backfield.