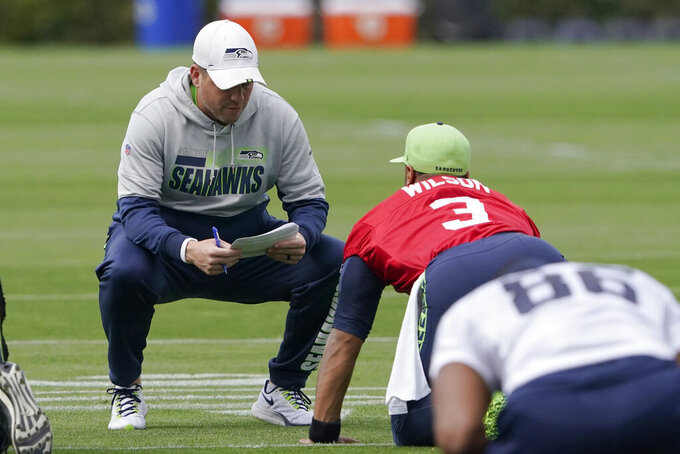 FILE - Seattle Seahawks offensive coordinator Shane Waldron, left, talks with quarterback Russell Wilson (3) during stretching before NFL football practice in Renton, Wash., in this Wednesday, Sept. 22, 2021, file photo. When the Seahawks brought Shane Waldron on board as offensive coordinator this offseason, they were hoping to pull some of what worked so well for the division rival Los Angeles Rams and implement it into a system run by Russell Wilson. The test of how well that's worked for Seattle comes on Thursday facing the Rams. (AP Photo/Ted S. Warren, File)

RENTON, Wash. (AP) — When Pete Carroll and the Seattle Seahawks went shopping for an offensive coordinator in the offseason, they landed on Shane Waldron, hoping he could recreate the success he had with the division rival Rams.

So, four weeks into the regular season, how does Waldron’s former boss in Los Angeles think it’s going?

“They’ve got a lot of playmakers, but I think Shane’s putting his own spin on it,” Rams coach Sean McVay said. “There are some elements of some things that would look familiar to you guys. But it’s certainly it’s the Seahawks offense for sure. And he’s done a nice job for the first four weeks without a doubt.”

Seattle was hoping when it hired Waldron that he could merge what worked so well for the Rams with the talents of Russell Wilson. The biggest test of that partnership so far will be Thursday night, when the Seahawks host the Rams in an early NFC West showdown.

Seattle watched for the previous four seasons as the Rams' offense became one of the best in the game. Waldron wasn’t the architect in Los Angeles, but he was heavily involved in the development of McVay’s schemes.

“I thought Shane and a couple other guys from that same background were guys that I was really excited about as well,” Carroll said. “Shane was the best, right guy for our situation for everything that we were trying to get done.”

So far, it’s been a mixed bag for Seattle. Wilson leads the league in passer rating and hasn’t thrown an interception. But the Seahawks were putrid offensively in the second half of losses to Tennessee and Minnesota, and last week went five straight drives to start the game against San Francisco without a first down.

Waldron said Tuesday he’s trying to separate his worlds — his personal relationships with friends still with the Rams and the crush of preparing quickly for an important game.

“The Thursday night kind of puts it in such a fast-forward tempo as far as the preparation goes, so you don’t really have a lot of time to stop and think about how would this be different than going against another opponent,” Waldron said.

In a normal week, Wilson might take some extra time with Waldron to break down all aspects of the Rams' defense. With the shortened week, that’s not going to happen.

But Wilson is plenty familiar with the Rams, and Waldron sees only incremental changes from LA's defense under former coordinator Brandon Staley to this year's unit led by Raheem Morris.

“I think having Shane around is great because you really have to know, kind of, their players,” Wilson said. “Obviously, we’ve played them so much over the years, but I think he just has a great understanding of who they are and just kind of the players they are and everything else.”

Seattle's defense also hopes to benefit from having Waldron, and to a lesser extend tight end Gerald Everett, around this year. The Seahawks have been going against schemes similar to the Rams' since the offseason.

The flip side? The Rams also have an understanding of how Seattle wants to operate.

“We have been talking about it the whole time in all aspects,” Carroll said. “We really couldn’t have more help in that regard. It doesn’t mean it shows, but we do have a lot of insight. They do too, they have theirs because he’s been with those guys a lot longer than with us. It’s a factor in some regard but I don’t know where it fits.”