Seahawks say they're not open for business on dealing Wilson 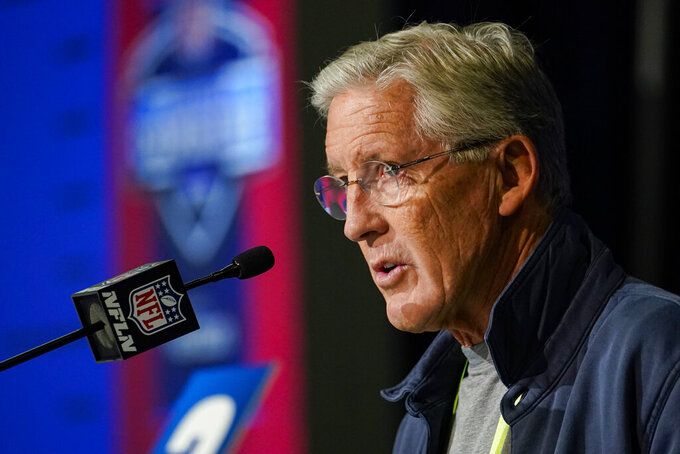 INDIANAPOLIS (AP) — Pete Carroll says the Seattle Seahawks aren’t open for business when teams may inquire about the availability of quarterback Russell Wilson this offseason.

“That’s commonplace for us to have conversations with teams about all of the players, particularly marquee players, and that’s not changed,” Carroll said on Wednesday. “It’s been the same every year we’ve been here so it’s the same as it’s been. We have no intention of making any move there.”

Carroll was later even more definitive with his comments about Wilson’s status in Seattle. While meeting with local beat writers away from the podium, Carroll said general manager John Schneider has given a standard message when teams may call: “We’re not shopping the quarterback.”

This year has been mostly quiet to date on the Wilson front after last offseason where there was plenty of noise and ongoing speculation about his future with the Seahawks. Wilson stayed despite the conjecture and had one of the more challenging seasons of his career that included missing games because of a finger injury for the first time in his 10 seasons.

Wilson played in 14 games and threw for 3,113 yards with 25 touchdowns and six interceptions. The Seahawks finished 7-10, their first time with a losing record since Wilson’s arrival and missed the playoffs for just the second time. There could be heightened conversation about his future in Seattle next offseason as Wilson has two years remaining on his current contract with the Seahawks.

Carroll said he and Wilson have stayed in consistent communication through the offseason. There are a couple of significant questions for Seattle’s offense with free agency approaching, including whether left tackle Duane Brown or running back Rashaad Penny are brought back.

“There’s been a lot of talk and all that. That’s just this time of year. But I feel like we’re on a good page that we know what’s going on and we’re communicating really well still,” Carroll said.

Carroll also provided injury updates on wide receiver DK Metcalf, running back Chris Carson and safety Quandre Diggs. Diggs suffered a serious ankle injury in the final minutes of the season finale at Arizona, but should be recovered in time for training camps. Diggs is a free agent.

Metcalf underwent foot surgery after the season for a prior issue. Metcalf had been limited in practice for most of the season because of the foot troubles.

“He did everything he could and he did admirably, remarkably well,” Carroll said of Metcalf. “But you can only get so much done. He’s still a young player. He’s still developing player and he’ll get better.”