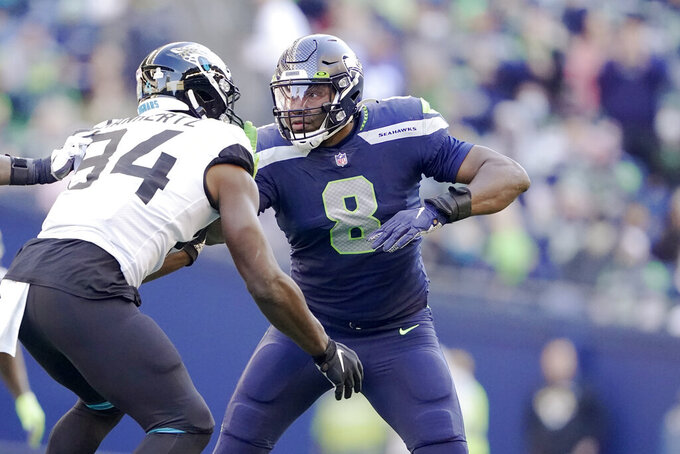 TURNOVER DIFFERENTIAL: Seahawks plus-4; Packers plus-6.

SEAHAWKS PLAYER TO WATCH: QB Russell Wilson. The seven-time Pro Bowl selection is expected to return to action Sunday after missing three games because of an injury to the middle finger on his throwing hand that required surgery. Wilson had started 165 consecutive combined regular-season and playoff games before this injury.

PACKERS PLAYER TO WATCH: OLB Rashan Gary. The Seahawks will have to make sure this guy stays far away from Wilson. Gary’s emergence has helped the Packers withstand the absence of 2020 Pro Bowl pass rusher Za’Darius Smith, who hasn’t played since the season opener due to back trouble. Gary had a sack and three quarterback hits against the Chiefs. He has 18 quarterback hits this season, putting him in a tie for fifth place in the league.

KEY MATCHUP: Packers RBs Aaron Jones and A.J. Dillon vs. Seahawks LB Bobby Wagner. Dillon’s emergence in his second season has helped him form a quality tandem with Jones, a 2020 Pro Bowl pick. Jones has rushed for 516 yards and Dillon has run for 355 yards. Wagner is one of the NFL’s top run-stopping linebackers and needs just seven more stops to clinch his 10th straight 100-tackle season.

KEY INJURIES: The Seahawks are optimistic about Wilson’s chances of playing Sunday as he returns from his finger injury. … Seahawks RB Chris Carson is practicing again after missing four games with a neck injury, though his status for Sunday remains uncertain. … Seahawks LB Cody Barton (quadriceps) and S Marquise Blair (knee) didn’t practice Wednesday. … Packers QB Aaron Rodgers missed the Chiefs game after testing positive for COVID-19. He could return as early as Saturday, which would enable him to play in Sunday’s game. …Packers OT David Bakhtiari (knee) was activated from the physically unable to perform list Wednesday, but his status for Sunday remains uncertain. … Packers TE Robert Tonyan (knee) is out for the season. … Packers CB Jaire Alexander (shoulder), OLB Za’Darius Smith (back) and C Josh Myers (knee) are on injured reserve and won’t play Sunday.

SERIES NOTES: The Seahawks haven’t won at Green Bay since 1999. Since then, the Seahawks have lost six regular-season games and three playoff contests at Lambeau Field. Including the playoffs, the home team has won the last nine matchups in this series. … The last victory by a visiting team was Green Bay’s 27-17 victory at Seattle in 2008. … The Packers are 11-0 against Seattle when they score at least 25 points.

STATS AND STUFF: Seahawks WR DK Metcalf has 25 career touchdown catches already. The only other NFL players since 1990 with at least 25 touchdown catches through their first 40 career games are Randy Moss (36) and Odell Beckham Jr. (34). … Metcalf has eight touchdown catches this season to tie Tampa Bay’s Mike Evans for second place in the NFL, behind Cooper Kupp of the Los Angeles Rams with 10. … Seahawks S Jamal Adams has 21 ½ sacks since 2017, the most by any NFL defensive back during that stretch. … Green Bay’s loss at Kansas City snapped a seven-game winning streak. … The Packers share the NFL’s second-best record with the Los Angeles Rams and Tennessee Titans. The Arizona Cardinals (8-1) have the best overall record but have lost to Green Bay. … Packers QB Jordan Love, a 2020 first-round draft pick from Utah State, made his first career start in the Chiefs game. Love would start again if Rodgers is unavailable Sunday. … The Packers have allowed no more than 23 points in six straight games. … Packers K Mason Crosby has made just four of his last 10 field-goal attempts. Before this slump, he made a franchise-record 27 straight field-goal attempts. … The Packers are returning home after playing four road contests in a five-game stretch. … Seahawks executive vice president/general manager John Schneider worked for the Packers from 1992-96 and 2002-09 in a variety of roles.

FANTASY TIP: Jones remains the No. 1 choice among Packers running backs, but Dillon is coming on lately and showing some versatility with his pass-catching ability. Dillon followed up a 78-yard rushing performance at Arizona by running eight times for 46 yards and catching four passes for 44 yards at Kansas City. His role could get even bigger as the weather gets colder in the second half of the season.