Shanahan 'believes' Garoppolo will be 49ers QB in 2021 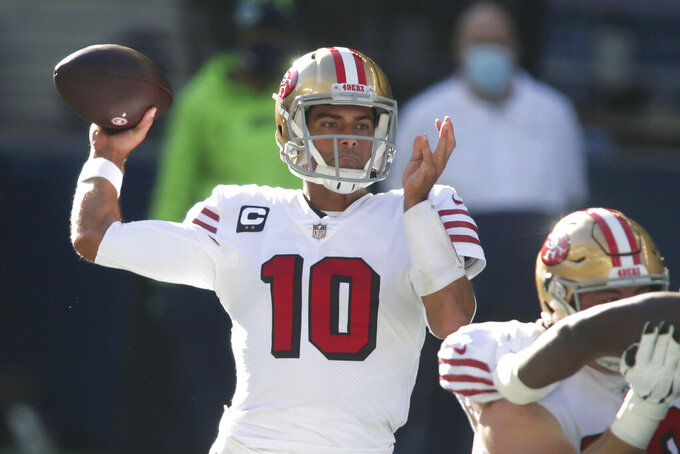 Jimmy Garoppolo isn’t expected to take another snap this season for the San Francisco 49ers as a pair of high ankle sprains derailed most of his campaign.

Despite the lost season, the 49ers remain publicly committed to Garoppolo as their quarterback for 2021, even tough he has remained healthy only once in three seasons as starter.

“I do believe Jimmy’s going to be our quarterback next year,” coach Kyle Shanahan said this week.

Shanahan added that nothing in the NFL is completely certain and the Niners will do what it takes to build the best roster possible this offseason.

But he points to the success San Francisco has had when Garoppolo has been healthy with a 22-8 record in those games since he arrived in 2017. That's compared to the 7-26 mark with all other quarterbacks under Shanahan as a reason to stick with him.

“Look at Jimmy’s record when he’s been here. Jimmy, you can win with. He’s proven that,” Shanahan said. “He’s proven he’s a starting quarterback in this league. We had a couple of other guys who got opportunities this year who played like they have a chance at times to be starting quarterbacks, but they did play like backups overall.”

The Niners acquired Garoppolo in a midseason trade from New England in 2017 and he won the final five games that season after San Francisco started the year 1-10.

That earned Garoppolo a $137.5 million, five-year contract that offseason, but he then tore his ACL in the third game of 2018, contributing to a 4-12 record with C.J. Beathard and Nick Mullens taking over for the final 13 games.

With a healthy Garoppolo and a dominant defense last season, San Francisco went 13-3 and was in position to win the Super Bowl before Garoppolo and the defense faltered in the fourth quarter of a 31-20 loss to Kansas City.

That led to high hopes this year, but Garoppolo injured his ankle in Week 2, returned for four more starts beginning in Week 5 before going down with another high ankle sprain that has ended his season.

“I think he would have taken steps forward and it would’ve been great for him to play this year,” Shanahan said. “After what he got playing the year before, being able to go through his first full season, I think regardless of how it started out, it would have been a good experience for him to only get better. The injuries he had kind of took the year from him. ... It was unfortunate for Jimmy and for our team. I know it’s frustrating for him, but that’s why he’s got to go into this offseason and do everything he can in this offseason to get ready for Week 1 next year.”

The questions about Garoppolo’s status stem from the fact that while he has played efficiently at times, he isn’t at the level of the top quarterbacks in the league. With a nearly $27 million salary cap hit for next season, but only minimal dead money of $2.8 million if the Niners decide to move on, the possibility for change is there.

San Francisco could be in position to draft a rookie quarterback and look to save money at the position in an offseason when cap room will be tight. The Niners also could look to acquire a veteran on the trade or free agent market who could be more durable or perhaps more effective.

But Shanahan doesn’t expect many better options out there than a quarterback who threw 27 TD passes and posted a 102 passer rating in 2019, and says Garoppolo’s salary is in the middle of the pack for quarterbacks.

“That’s how much they cost,” Shanahan said. “Now, you look into every avenue and you see if there’s something out there that can get you a ton better it’s the same answer for every position. But look at Jimmy, look what he’s done, look at where he’s at with us financially and we better have a very good answer if you’re going to find something better than that, because Jimmy’s shown in one year that he’s a guy who can take us to the Super Bowl, and I also think Jimmy’s going to get a lot better the more he plays.”