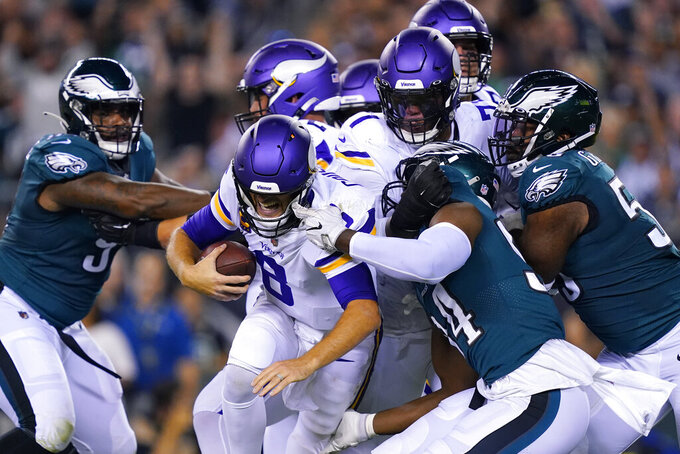 EAGAN, Minn. (AP) — The Minnesota Vikings rarely strayed from a commitment to rushing over the last five years since Dalvin Cook was drafted, a strategy previous coach Mike Zimmer felt so strongly about that he more than once publicly criticized the play-calling by his offensive coordinator.

The signs of a philosophy shift have been apparent, beginning with the selection of Zimmer's predecessor, Kevin O'Connell, from the Super Bowl champion Los Angeles Rams.

After two games, small sample size notwithstanding, the difference is clear.

Cook had a career-low six carries in the 24-7 loss at Philadelphia on Monday night, and he has 107 yards on 26 attempts on the season. Even with seven catches, tied for second on the team, Cook has had a remarkably quiet start.

“We’ll continue to work through that to make sure we get him touches. How are we packaging plays to not get talked out of running the football? And I think that’ll be key for us moving forward. Not just this week, but a lot of time the rest of the season,” O'Connell said. “He’s a very important player to our offense. I have all the confidence in the world in him, and I’ve got to do a better job of making sure that I get him in a rhythm.”

From 2018-21, quarterback Kirk Cousins’ first four years in Minnesota and the first four full seasons for Cook after an ACL tear aborted his rookie year in Week 4, the Vikings called passes on 49.4% of their first-down plays. That ranked 20th in the NFL over that span, according to Sportradar data.

For second-down distances of 8 yards and longer, the Vikings were the most infrequent passing team in the league at 60.2% of those snaps over the previous four seasons.

This year, they've passed on 61.4% of first downs, per Sportradar, for the NFL's second-highest rate. That number, of course, is influenced by the fluke occurrence of having only 21 snaps in the first half against the Eagles after consecutive three-and-out possessions to start the game while their opponent hogged the ball on three 80-plus-yard touchdown drives.

The Vikings trailed by three scores for the entire second half, increasing their urgency to throw. But it's hard to picture a Zimmer-coached Vikings team that wouldn't have at least tried to mix in a few more runs in a game like that.

“You kind of have to balance both. It’s kind of hard as a coach,” Cook said.

Part of Zimmer's insistence stemmed from his dual role as the de facto defensive coordinator who called the game on that side of the ball throughout his eight-year tenure. Running the ball, and of course moving the chains, can be a tired defensive player's best friends.

There's also the issue of establishing a flow of the play-calling to allow a star to maximize his strengths, a factor that can apply to wide receivers as well as running backs. Cook has not been able to find that rhythm yet.

“If we don’t have a productive run on first down and third down we don’t convert, now we just missed out on a potential first- or second-down call or third-down call to run the football again,” Cousins said. “It kind of all ties together. It’s amazing how when you’re efficient in one area, it can help the other area take off.”