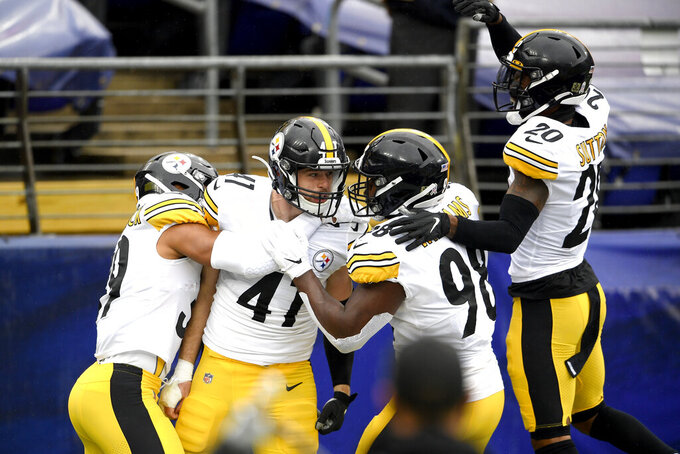 Pittsburgh Steelers linebacker Robert Spillane, second from left, celebrates with teammates after after scoring on an interception of a pass from Baltimore Ravens quarterback Lamar Jackson, not visible, during the first half of an NFL football game, Sunday, Nov. 1, 2020, in Baltimore. (AP Photo/Nick Wass)

BALTIMORE (AP) — The Pittsburgh Steelers roared from behind to remain the lone unbeaten team in the NFL, outlasting their scorned rivals to escape with a feel-good victory that solidified their grip on first place in the AFC North.

What better way to spend a rainy day in Baltimore?

Pittsburgh (7-0) trailed by 10 points at halftime before rallying behind Roethlisberger, a crafty 38-year-old who missed most of last year with an elbow injury. After completing only four passes for 24 yards in the first half, Big Ben finished 21 for 32 for 182 yards.

He was much more happy with the result than his numbers.

“Nothing about this game was pretty from an offensive perspective until the end and we looked at the scoreboard," Roethlisberger said.

Jackson threw two interceptions and lost two fumbles, miscues that helped Pittsburgh stay within striking distance until its offense finally got on track.

“The turnovers, I feel, is the reason we lost the game," Jackson said. “I put that on me.”

Beyond losing ground in the division, Baltimore lost All-Pro left tackle Ronnie Stanley for the season with a severe ankle injury. The mishap occurred in the first quarter after he was accidentally undercut by Pittsburgh’s T.J. Watt.

Baltimore got the ball back and moved to the Pittsburgh 23 before Jackson's pass in the end zone was broken up on the final play.

The only other time the Steelers started 7-0, in 1978, they went on to win their third Super Bowl in five years.

They aren't talking about a championship yet, but the players feel pretty good about where they stand at this point.

The Steelers took full advantage of Jackson's mistakes. Robert Spillane took an interception back 33 yards for a score to end Baltimore's first possession; Jackson lost a fumble inside the Pittsburgh 5; and Alex Highsmith set up a Steelers touchdown by picking off a pass on Baltimore's initial offensive play of the second half.

Jackson went 13 for 28 for 208 yards and two interceptions, the most he's had in a regular-season game since throwing three against Pittsburgh in October 2019.

After Highsmith's pick, Roethlisberger threw an 18-yard TD pass to Eric Ebron. The Steelers then went ahead 21-17 on a 1-yard touchdown run by James Conner.

Baltimore had scored in every quarter this season before being blanked in the third period.

The Ravens regained the lead with a 3-yard touchdown pass to Marquise Brown with 11:52 to go, but Roethlisberger answered with an 80-yard drive capped by an 8-yard TD pass to rookie Chase Claypool.

“That’s the Ben Roethlisberger I came here for,” said Ebron, who left the Colts to come to Pittsburgh.

The game carried the intensity expected when longtime division rivals clash in a showdown for first place. There were hard hits, late hits and head butts, the latter occurring when Ravens cornerback Marcus Peters popped Steelers receiver Diontae Johnson during a confrontation away from the play.

That brought players from both teams near the Baltimore sideline. Late in that fray, Ravens linebacker Matthew Judon was ejected for making contact with an official. It appeared as if the slap to the arm occurred while Judon was trying to break free from the grasp of an assistant coach.

“I would never intentionally make contact with an official," Judon said.

A heavy rain let up just before the opening kickoff, but the combination of a wet field and two strong defenses resulted in a first quarter with three turnovers — two by Jackson.

The Steelers stretched their streak of games with at least one sack to 64, and Baltimore's run of games with a takeaway reached 20 when Peters forced a fumble by Claypool in the first quarter.

The announced crowd was 4,345. It was the first time the Ravens had fans at a home game after previously making around 250 seats available to the immediate family of players, coaches and front office personnel.

Ravens: RB Mark Ingram (ankle) was inactive. ... RG Tyre Phillips (ankle) left in the first quarter and did not return, leaving Baltimore without two starters on the O-line.

The Steelers play the last of three straight road games at Dallas next Sunday.

The Ravens travel to Indianapolis on Sunday, the first meeting between the teams since 2017.