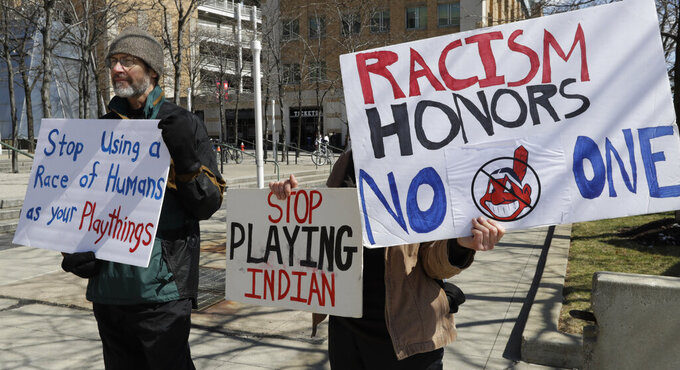 FILE - James Watson, left, protests before a baseball game between the Chicago White Sox and the Cleveland Indians, Monday, April 1, 2019, in Cleveland. The Cleveland Indians are changing their name _ they just don't know to what or when. Expressing that “it's time," team owner Paul Dolan said that after months of internal discussions and meetings with groups, including Native Americans who have sought to have the team stop using a moniker many deem racist, the American League franchise is dropping the name it has been known by since 1915. In an exclusive interview with The Associated Press on Monday, Dec. 14, 2020, Dolan said: “The name is no longer acceptable in our world.”(AP Photo/Tony Dejak, File)

Colorful names for teams are nearly as old as team sports themselves.

But as a growing movement aims to right the wrongs of the past, including notable successes with pro sports franchises in Cleveland and Washington recently, it reminds us history hasn’t always been kind — let alone fair — to marginalized groups.

“I don’t know where the momentum is going to go,” said Joshua Hunt, vice chair of The Committee of 500 Years of Dignity & Resistance, whose Cleveland-based organization joined a coalition of Native American activists who convinced the city’s baseball team to drop “Indians“ — first adopted in 1915 — from its name.

“But we’re hoping,” Hunt added, “this will be a blueprint for professional teams like the (Atlanta) Braves, Kansas City Chiefs, (Chicago) Blackhawks and all the thousands of public schools that this is what happens when you take the time to actually listen to indigenous people.”

By now, because of pressure from activists, the public or their corporate sponsors, most sports teams have shed overtly racist names of the past. More than a dozen major college or pro sports teams made the move over the last 50 years.

But a few have clung to Native American names and imagery, arguing they reflect honor and respect. History says otherwise.

Chariot-racing teams in ancient Rome first adopted colors and symbols — and later names — largely as a practical matter, to distinguish themselves from rivals during the actual events. Over time, though, those identifiers took on added significance. Like nations and religions, they became a marker to strengthen the bonds among followers and separate friends from foes.

As sports gained a foothold in America’s popular culture in the late 1800s, fans needed a way to differentiate the many teams playing the same sports in the same city. Sometimes, it was as uncomplicated as adding the name of the neighborhood or point of pride for its residents, i.e. the Brooklyn Dodgers around 1910, because pedestrians there were constantly forced to detour around streetcar lines.

Other times, the names were chosen to highlight the ethnicity of the players that made up the team, or to appeal to the language and culture of their fan base, like the Montreal Canadiens in 1909, because their francophone followers relished every chance to go up against English-speaking teams like the rival Wanderers.

Still other times, names were derived from chants that originated with fans or suggested by reporters at local newspapers. The New York Highlanders baseball team officially changed its name after moving into the new Polo Grounds in 1913, but the city’s dailies had been calling them the “Yankees” for nearly a decade by then, simply because it was an easier fit in headlines.

But as sports became increasingly popular and profitable at the turn of 20th Century, owners sought to fire up the imaginations of their fans. It hardly helped marginalized groups like Blacks and Native Americans that those owners tended to be rich white men, who found their beliefs in cultural superiority reflected in the accomplishments being notched around the world by America’s growing might.

Many of those owners named their teams Indians, Braves and Redskins at the very moment the United States government was in the final throes of a largely one-sided battle to take lands from various Indian and First Nations tribes and isolate its people on reservations — attempting to effectively destroy their language and culture.

“It was a learning process for me," Cleveland team owner Charles Dolan said in an interview with The Associated Press, "and I think when fair-minded, open-minded people really look at it, think about it and maybe even spend some time studying it, I like to think they would come to the same conclusion: It’s a name that had its time, but this is not the time now, and certainly going forward, the name is no longer acceptable in our world.”

But activists argue that there was never an appropriate time, and certainly not when they began to show up. At the specialized boarding schools where Native Americans were sent for “reeducation,” the unofficial motto was “Kill the Indian and save the man.” A number of studies since have established the psychological damage those policies and the continuing negative portrayals in popular culture have inflicted on Native Americans, among whom suicide is a leading cause of death.

“Shortly after the so-called ‘Indian Wars’ of the 1880s, that’s when we see sports teams start to use the names on a wide basis,” said Hunt. “It’s almost as if they did it to say, ‘After we defeated them, now we’re going to parade them around.’

“It’s sort of like a when a hunter kills a bear or a deer and puts their heads on a wall. ‘Look, we killed and conquered these people.’ And,” he said, “at the same time these mascots start showing up, the federal government has made it illegal for indigenous people to speak their own languages or honor their own customs.”

An organized pushback against offensive names and imagery didn’t begin in earnest until the 1960s, as groups like the American Indian Movement became part of a broader push for civil rights across the country. Coincidentally, the federal government’s relocation program had by then moved enough Native Americans into large cities, where many became fans of local sports teams and began to mount efforts to change those names.

Many of those activists credit the 1972 decision by Stanford University, a prestigious school with sports programs to match, to drop “Indians” from its name as an important first step. In 2005, the NCAA finally adopted a policy banning “hostile and abusive” names and mascots, excepting schools that had reached an agreement with particular tribes to use their name, such as the Florida State Seminoles.

“The hopeful thing is we see that when a respected institution merely announces it’s going to change, like we saw in Cleveland, that often leads to a flood of nonprofessional teams changing,” Hunt said.

“There’s no silver bullet. It can’t just be a top-down or bottom-up focus. … I think we’ve still got something like 400 teams with those names here in Ohio. We need local grassroots campaigns and high-profile groups and we need to advocate for change and support one another."

“But,” he said, “what just happened here in Cleveland is already putting another shot in the arm.”