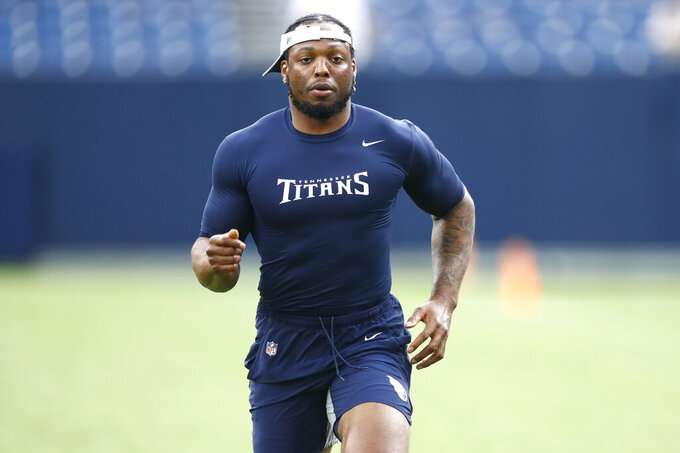 Tennessee Titans running back Derrick Henry warms up before a preseason NFL football game against the Chicago Bears, Saturday, Aug. 28, 2021, in Nashville, Tenn. Henry became the first to lead the NFL in rushing in back-to-back seasons since LaDainian Tomlinson in 2006-07, and also was the eighth man to run for at least 2,000 yards. Nobody in the NFL has carried the ball as much as Henry the past two seasons, and the Titans limited his work this preseason to keep him fresh as possible. (AP Photo/Wade Payne)

Reaching the Super Bowl for the first time in 22 seasons is squarely in the Titans' sights for the 2021 season. Coach Mike Vrabel isn't shying away from the lofty goal for a franchise that has reached the league championship only once in its history.

“Our job is to continue to raise expectations for our football team, for our coaching staff, for just our entire organization,” Vrabel said. “That is what we have been charged to do, that is our job. There is a plan to doing that.”

The Titans see no reason why they can't contend for the AFC championship, a game they lost in Kansas City in January 2020. They have Derrick Henry, the AP NFL Offensive Player of the Year and back-to-back NFL rushing champ and Ryan Tannehill who helped Tennessee rank fourth in scoring last season.

Tennessee ended one drought last season, winning the AFC South for the first time in 12 seasons. But the Titans lost in the wild-card round when Baltimore found a way to smother Henry and the offense.

Henry became the first to lead the NFL in rushing in back-to-back seasons since LaDainian Tomlinson in 2006-07, he also was the eighth man to run for at least 2,000 yards. Nobody in the NFL has carried the ball as much as Henry the past two seasons, and the Titans limited his work this preseason to keep him fresh as possible.

Asked about his motivation for this season, Henry made clear he remembers being held to 40 yards on 18 carries.

“You're only as good as your last game, and that’s the last time I played,” Henry said.

Tannehill set a franchise record with 40 touchdowns, 33 passing and seven rushing. The Titans tied Buffalo for the second-most yards per game (396.4) and ranked fourth in scoring in averaging 30.7 points per game. Only Kansas City averaged more yards per play over the past two seasons than Tennessee, while Baltimore is the only NFL team with more touchdowns in that span.

By trading for Jones, the Titans hope they upgraded from Corey Davis, now with the New York Jets, going with the receiver whose 95.5 yards receiving per game over his career is best in NFL history. Davis left the playoff loss with an injury, allowing the Ravens to focus on Brown and Henry in smothering the Titans.

That has the Titans hoping they can force opponents to pick and choose whom to defend first, giving everyone else more room to work.

The Titans struggled to get off the field on third down all season long in 2020. They were last in the NFL — by a long shot — at 51.8%. They also were last in sacks in the league until the final week of the season and a trip to Houston helped them finish 30th in that category. Tennessee was 29th against the pass.

That's why Robinson signed outside linebacker Bud Dupree and defensive lineman Denico Autry along with cornerback Janoris Jenkins as part of a complete makeover of the secondary. He drafted two new cornerbacks in Caleb Farley, the No. 22 pick overall, and Elijah Molden.

The kicker position has become an adventure for Tennessee, which has used seven different kickers over the past two seasons. The Titans tried to let Tucker McCann and undrafted rookie Blake Haubeil fight for the job before claiming Sam Ficken off waivers from the New York Jets during training camp.

Ficken may have the job for now. He kicked well in joint practices and a preseason win over Tampa Bay, including making a 58-yard field goal. That prompted Tennessee to waive McCann a couple of days later.