Titans closer to new stadium with $500 million from state 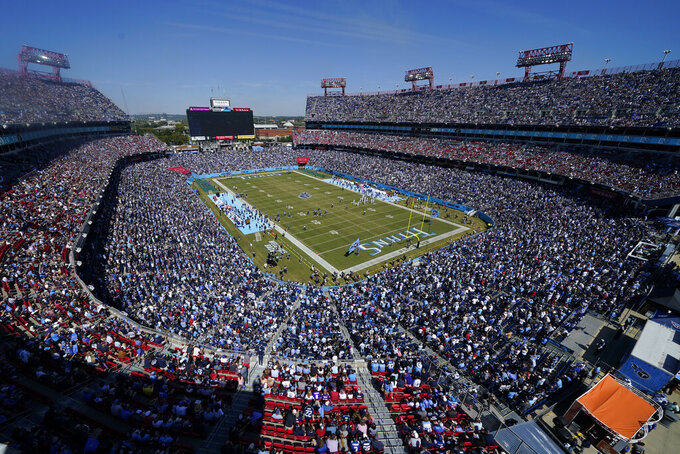 FILE Fans watch the Tennessee Titans and the Indianapolis Colts play in an NFL football game in Nissan Stadium, Sept. 26, 2021, in Nashville, Tenn. The Titans have taken a big step closer to a new, enclosed stadium estimated to cost between $1.9 billion and $2.2 billion that can help Music City bid to host events like a Super Bowl. (AP Photo/Mark Humphrey, File)

NASHVILLE, Tenn. (AP) — The Tennessee Titans have taken a step closer to financing a new, enclosed stadium estimated to cost between $1.9 billion and $2.2 billion.

The Tennessee legislature approved $500 million in bonds late Thursday night for an enclosed stadium. The proposal now goes to Gov. Bill Lee’s desk, where the Republican is expected to sign off on the deal.

“It was a huge step, and we are very grateful to the governor and to the Legislature for their support and for their collaboration,” Titans president and CEO Burke Nihill told The Associated Press on Friday. “But there’s there’s still a lot of work to do."

About two-thirds of the estimated cost of the stadium has been accounted for with the $500 million in state bonds and $700 million coming from the Titans' owners. The rest of the funding still has to be arranged, and talks between the Titans and Nashville officials have been ongoing for months.

Ownership and maintenance of the new stadium is also unclear.

Currently, Nashville owns and leases Nissan Stadium to the Titans. The stadium opened in 1999 in the deal luring the then-Houston Oilers to Tennessee in 1997, and an original plan for renovations ended when costs doubled to $1.2 billion. The current lease requires Nashville taxpayers to pay for maintenance and upgrades.

Nihill said they're meeting regularly with Nashville officials to work through those “complexities.”

The NHL's Nashville Predators agreed to a revised 30-year lease in May 2019 to eventually end Nashville's required payments for maintenance and upgrades at Bridgestone Arena, substituting money from sales and ticket taxes.

Not all state lawmakers agree on the merits of Tennessee helping out the Titans.

“Let them use their own darn money to invest it. I don’t think they ought to be using Tennessee taxpayers and I’m not ashamed to stand up for the taxpayers of Tennessee,” yelled Republican Jerry Sexton on the House floor. He added that he didn’t want the Legislature to act like “all the woke places.”

Nihil noted controlling owner Amy Adams Strunk and the Adams family have already paid for the expansion of the team's headquarters being wrapped up now in a “massive investment.” The family has been working for months to free up money for the stadium project with a farm already sold.

“They will continue to do that because they’re ready to make as big of an investment as they possibly can in a new building and in Nashville,” Nihil said.

The Buffalo Bills are the most recent team to get assistance from county and city officials to help pay have a new stadium. The Bills are moving into a $1.4 billion stadium built across the street from their existing facility, which was built in 1973 and is the NFL’s fourth oldest. New York and the county are committing $850 million with owners Terry and Kim Pegula and the NFL paying for the rest.

Both the Titans and the Bills are targeting the start of the 2026 season to open their new stadiums.

Nashville and Buffalo could be in line to host an upcoming Super Bowl after they move into their new homes.

The Titans’ new stadium would be built on the parking lots between Nissan Stadium and Interstate 24. Team officials hope to have renderings and designs by this fall, which will determine whether the stadium will feature a fixed roof or retractable roof along with the number of seats and a final estimate.