Top-seed Ravens focus on now, not then, in playoff vs Titans 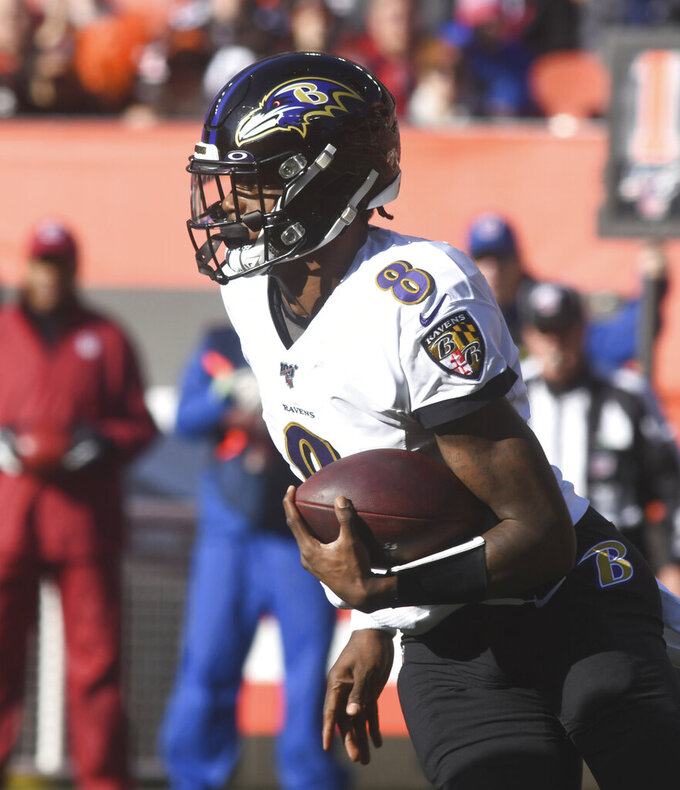 OWINGS MILLS, Md. (AP) — There's really nothing about the past that interests the Baltimore Ravens in relation to their playoff game against the Tennessee Titans on Saturday night.

The 21-0 win over the Titans in the 2018 season is irrelevant, given how much has changed since then. Baltimore's NFL-best 14-2 record this season got them home-field advantage and a first-round bye, but as guard Marshal Yanda noted, “The records are gone right now. The guys who got into the playoffs, you respect them. They’re there for a reason."

The Titans (10-7) are in this position because they upset the New England Patriots 20-13 on the road last Saturday. That's what the Ravens care about, far more than that Week 6 game in 2018 at Tennessee, when Baltimore sacked Marcus Mariota 11 times and held running back Derrick Henry to 21 yards on seven carries.

Ryan Tannehill is now running the Tennessee offense, and Henry has blossomed into a star. In addition to leading the NFL with 1,540 yards rushing, he rambled for 211 yards against Houston on Dec. 29 before running through the Patriots for 182 yards and a touchdown.

That's why the Ravens probably won't be watching much film from that game last year. Baltimore got three sacks from Za'Darius Smith, who's now playing for Green Bay, and each of the Ravens' three touchdowns were produced by players no longer with the team.

Joe Flacco was Baltimore's quarterback back then. Now it's Lamar Jackson, who's never faced the Titans but certainly knows what it's like to open the playoffs at home.

It's an experience he would rather forget. Facing the Los Angeles Chargers last January in the wild-card round, Jackson struggled in a 23-17 defeat that made Baltimore's first playoff appearance in four years a one-and-done affair.

Jackson was 6-1 as a starter, but against Los Angeles he completed only 14 passes in 29 attempts with an interception. Two touchdown passes in the fourth quarter after the Chargers had built a 23-3 lead did nothing to make him feel better about the final game of his rookie season.

That was then. Better to move forward than think about the past.

“That game is over with," Jackson said. “I really hated it. I don't want to talk about it anymore. I can't wait to play this week."

Jackson is a far more complete player than he was then. After an offseason in which he dedicated himself to becoming a better passer, Jackson had two games with a perfect quarterback rating and threw 36 touchdown passes with just six interceptions. He also set an NFL record for yards rushing by a quarterback (1,206 yards).

“He wants to win very badly," Ravens quarterback coach James Urban said. “So, when you have a great attitude and you come to work and you're really talented and you work hard at it, you see the results."

Against Tennessee last year, Alex Collins ran for 54 yards and two touchdowns. This time, the Titans will have to stop Mark Ingram, who ran for 1,108 yards in his first season with the Ravens to help the team set an NFL record with 3,296 yards rushing.

Coupled with a defense that improved steadily as the season went on, Baltimore won its final 12 games. Not that it means much now.

“We played some good ball in the regular season," cornerback Marlon Humphrey said. “Going into this new season, there’s really not a favorite. Everybody has a fair shot to win it all. You don’t really get another win, so you have to win out if you want to get there.”