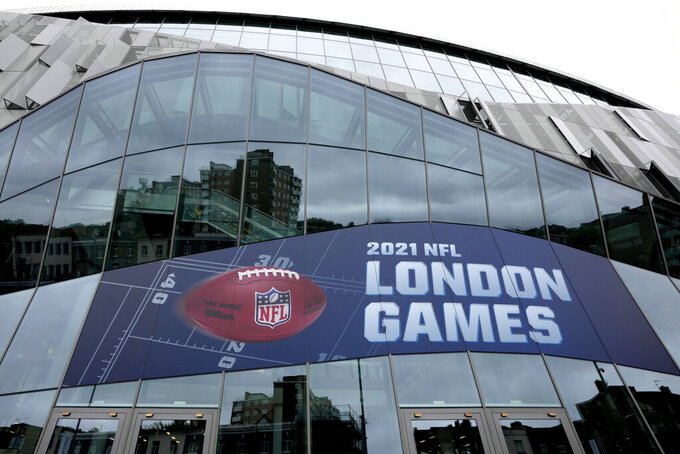 Buildings are reflected in the glass of the stadium as advertising promotes the NFL games to be played at the Tottenham Hotspur Stadium in London, Thursday, Oct. 7, 2021. After a one-year hiatus due to the pandemic, the NFL returns to London on Sunday when the Atlanta Falcons play the New York Jets at Premier League club Tottenham’s $1.6 billion facility (AP Photo/Kirsty Wigglesworth)

“They’re definitely rainmakers,” the 23-year-old Finney said Thursday from behind the bar at the Beavertown Corner Pin pub in the shadow of the Premier League club’s $1.6 billion facility. “You can’t really go wrong. It benefits both parties.”

After a one-year hiatus due to the pandemic, the NFL returns to London when the Atlanta Falcons play the New York Jets. A week later, the Jacksonville Jaguars face the Miami Dolphins also at Tottenham Hotspur Stadium.

While NFL grounds crews were set to begin painting team names and lines on the field, banners were already affixed along light posts on the streets to direct out-of-town fans from the nearby London Underground stations to the stadium.

The sparkling, state-of-the-art stadium — custom built with an NFL field below the Premier League team's moveable soccer pitch — stands in stark contrast to the Haringey borough in which it's located. The borough has one of the highest poverty rates in the city, according to the nonprofit Trust for London.

“NFL coming here it’s great, not a problem at all,” said the 56-year-old Percival, who was selling some goods at a fair outside the Tottenham Community Sports Centre. “They should bring more — not just (American) football alone. They had the boxing and it was a great turnout and there was a lot of talk about it.”

Like most locals, Percival isn't going to the game on Sunday. The NFL has staged 28 regular-season games in London from 2007-19 and they tend to attract international crowds, though the British fan base is growing.

“I’m into cricket,” the Guyana-born Percival said. “I love cricket.”

At the stadium, workers were busy turning the soccer team's retail space into an NFL store, where star players' jerseys and other items will be sold.

On the field, NFL vice president of game operations Matthew Joyce was overseeing everything else. The pitch on which Harry Kane scores Premier League goals was mechanically rolled under the stadium's south stand on Tuesday night.

The grass field splits into three sections before it's moved to make way for the astroturf underneath. Under the stand, the grass is kept alive with special lighting, cooling, irrigation and robotic mowers. The Arizona Cardinals use a similar system to slide their grass field in and out of State Farm Stadium.

Wembley Stadium has hosted the majority of the NFL games in London, but those are played on the same grass field that the England national team uses for its international soccer games. There are seven years left on Tottenham’s 10-year contract to host two NFL games annually.

“There are a lot of components, the key one getting the field out and then all the technology that goes into an NFL game,” Joyce said.

“The results are amazing,” he added. “Although we need four or five days to turn it around, it's just because the NFL world is so big. The technology is big, the locker rooms, the branding.”