Vikings' Hockenson giddy over move near home, into 1st place 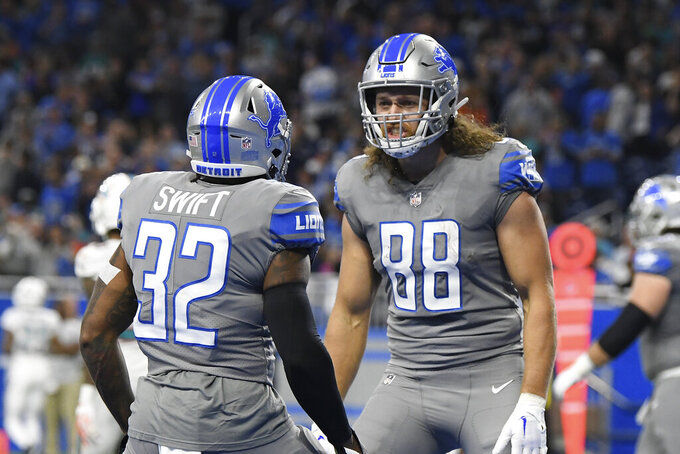 Detroit Lions running back D'Andre Swift (32) is greeted by tight end T.J. Hockenson (88) after scoring on a 7-yard run during the first half of an NFL football game against the Miami Dolphins, Sunday, Oct. 30, 2022, in Detroit. (AP Photo/Lon Horwedel)

EAGAN, Minn. (AP) — The heavy playbook study sessions facing T.J. Hockenson this week weren't much of a worry at all for Minnesota's newly acquired tight end.

Hockenson could hardly hide his smile on Wednesday, the first full day of his fast-tracked initiation. He has the opportunity to play home games one state away from his native Iowa. He has joined a Vikings team his father rooted for as a child with a bedroom painted purple and yellow.

Then there's the NFC North standings: going from 1-6 one day to 6-1 the next.

“Really what we’re here to do is go somewhere and win some games. That’s kind of the first time I’ve been able to say that,” said Hockenson, who arrived in Minnesota on Tuesday after a trade with Detroit. The Lions were 12-42-2 since Hockenson was drafted eighth overall in 2019.

Hockenson hails from Chariton, a small farming town in southern Iowa about a 4½-hour drive from Minneapolis. His parents, Teri and Tod, attend all of his games, so their commute will be cut by more than half of the length of the trip to Detroit. When the Lions played at Minnesota in Week 3, Hockenson had to buy about 30 tickets.

The Vikings don't play at home again until Nov. 20 against Dallas, but his mother and father are planning to be at Washington for the game this Sunday.

Hockenson's crash course in the new offense was softened a bit by his appreciation of head coach Kevin O'Connell, for whom his former quarterback Matthew Stafford played for last year with the Super Bowl champion Los Angeles Rams. Still, the “drinking from a fire hydrant” challenge of changing teams midseason is real.

“It's one thing to be able to see it on paper and say, ‘OK, oh, yeah, I got it,’ but then you hear it and you have to mentally decipher everything. It’s a different story,” Hockenson said. “So it’s definitely a process, and I’m starting.”

The Vikings now have another proven field-stretching option for quarterback Kirk Cousins to pass to and help keep some of the opposing defensive attention off wide receiver Justin Jefferson and running back Dalvin Cook.

With 395 receiving yards, Hockenson has the highest seven-game total of his career. He has a league-leading average of 15.2 yards per catch among qualifying tight ends. Hockenson made the Pro Bowl in 2020 and has 2,068 receiving yards and 15 touchdowns on 186 catches in 47 games.

The Vikings are last in the NFL with an average of 7.3 yards per reception by a tight end, according to Sportradar data. Their primary tight end Irv Smith Jr. suffered a serious ankle sprain on Sunday and will miss a minimum of one month on injured reserve. The Vikings were still determining whether or not Smith would have surgery, but O'Connell said with confidence that he would return at some point this season.

“We're always looking for ways to upgrade the team, but you always want to be careful,” general manager Kwesi Adofo-Mensah said. “I think a team is a very delicate chemistry, and you want to make sure that you're not over-tweaking or overdoing anything.”

Adofo-Mensah has frequently referred to a guiding principle for roster moves of “living in today and tomorrow” so as not to sacrifice too many draft picks or too much salary cap flexibility for a short-term benefit. Hockenson being signed on a rookie deal through 2023 allows the Vikings to check both boxes. Smith will become a free agent after this season.

“We like the value of the contract. We also like the player. I want to make sure that's clear. We like the player, the skillset, what he provides to this offense, how he allows us to play,” Adofo-Mensah said.