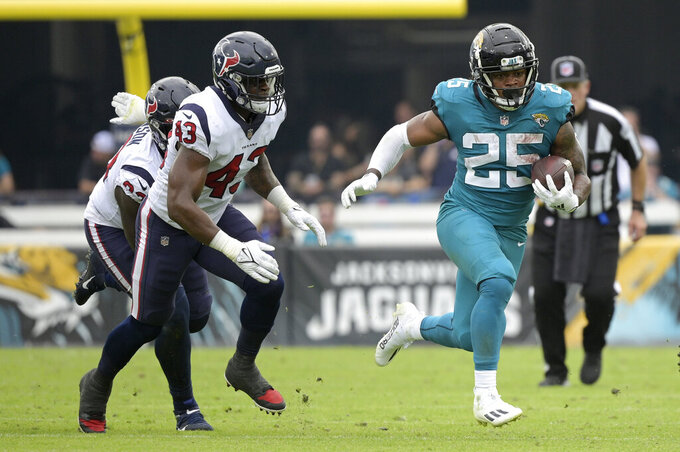 BETTING LINE: Commanders by 2½, according to FanDuel Sportsbook

TURNOVER DIFFERENTIAL: Jaguars minus-20; Washington minus-5

JAGUARS PLAYER TO WATCH: After the team’s ill-advised year with Urban Meyer, 2021 No. 1 pick Trevor Lawrence gets a fresh start with QB guru coach Doug Pederson. Lawrence also has former Clemson teammate Travis Etienne back from a foot injury that ended the running back’s rookie season before it started and a revamped offensive line anchored by 2020 All-Pro guard Brandon Scherff, who joined from Washington.

COMMANDERS PLAYER TO WATCH: The spotlight is justifiably on QB Carson Wentz in his debut, which comes against Pederson, who coached him in Philadelphia, and the team he lost the season finale to last year while with Indianapolis. But the key to not repeating that result with Washington is RB Antonio Gibson. The starter again after rookie Brian Robinson Jr. was shot twice in the right leg, Gibson needs to hold on to the ball after fumbling six times losing four last season.

KEY INJURIES: Jaguars RB James Robinson is expected to play nine months after tearing his left Achilles tendon. ... DT Foley Fatukaski is dealing with a calf injury. ... Commanders S Kamren Curl is out with a right thumb injury. ... TEs Logan Thomas, who's coming back from tearing multiple ligaments in his left knee, and rookie Cole Turner (hamstring) are questionable.

SERIES NOTES: Washington has won the past four games against Jacksonville. ... The Jaguars have lost an AFC-record 16 consecutive games against NFC opponents. That skid spans two coaches and seven starting quarterbacks. ... Wentz and Pederson spent five years together with the Philadelphia Eagles from 2016-2020, including the 2017 season when they won the Super Bowl after the QB tore the ACL in his left knee in December. ... Pederson is attempting to be just the second Jaguars coach in the previous seven to win his first game with them. One of those losses belongs to Jack Del Rio, who is now Washington’s defensive coordinator. ... Washington is playing its first game as the Commanders following an organizational rebranding. It was known as the Washington Football Team the past two seasons.

STATS AND STUFF: Four first-rounders are expected to make their NFL debuts: Etienne, 2022 top pick Travon Walker and Devin Lloyd for Jacksonville and Jahan Dotson for Washington. ... Lawrence’s 359 completions last season led all rookies, and he finished second among them with 3,641 yards passing. ... Robinson ran for a career-high eight touchdowns last season before getting injured. ... WR Christian Kirk plays his first game with the Jaguars after signing from Arizona. He’s coming off setting career highs with 77 catches and 982 yards receiving last season. ... LB Josh Allen led Jacksonville with 7½ sacks in 2021. ... LB Foyesade Oluokun makes his Jaguars debut after leading the league with 192 tackles last season while playing for Atlanta. ... Jacksonville is on its sixth kicker in two months after claiming Riley Patterson off waivers from Detroit after roster cuts were made to the 53-player limit. ... Ron Rivera is beginning his third season as Washington’s coach and head of football operations. ... Wentz makes his Commanders debut against the Jaguars after losing to them in his final game with Indianapolis last season, which kept the Colts out of the playoffs. ... Wentz threw for 3,563 yards, 27 TDs and seven interceptions last season. ... J.D. McKissic is one of three running backs with 120-plus receptions since Week 1 in 2020. ... WR Terry McLaurin led Washington with 77 catches for 1,053 yards and five TDs last season. ... DT Jonathan Allen is coming off a career year in which he led the team with nine sacks and 10 tackles for loss. ... DE James Smith-Williams is expected to start in place of injured pass rusher Chase Young, who will miss at least the first four games of the season if not more while recovering from knee surgery. ... LB Cole Holcomb led Washington with a career-high 142 tackles in 2021. ... Washington returns its top four starting defensive backs in Kendal Fuller, William Jackson, Curl and Bobby McCain. Curl set career highs with 98 tackles and five passes defensed last season.

FANTASY TIP: If Robinson is not limited in his return from the Achilles injury, that may push Etienne into more of a pass-catching role out of the backfield. But his familiarity with Lawrence from their time together at Clemson could still make Etienne valuable.