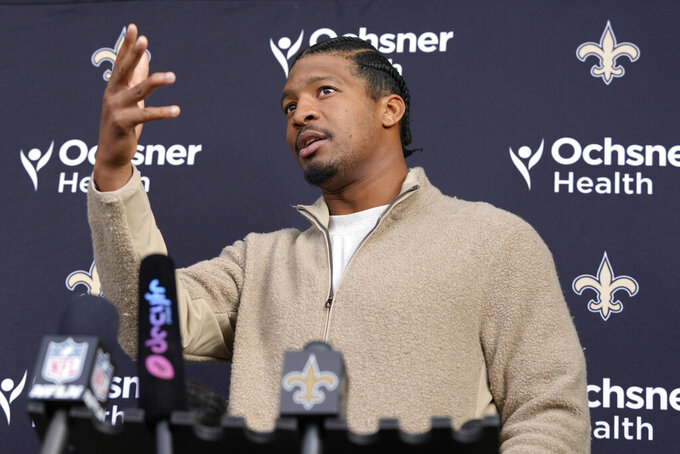 Dalton is expected to start after Jameis Winston was listed as doubtful for New Orleans’ game Sunday against the Minnesota Vikings at Tottenham Hotspur Stadium.

Dalton took first-team snaps again Friday with Winston missing a third consecutive practice because of a back injury.

“I'll be ready if my number is called," Dalton said. “I've been in this situation before where you're the backup and have to step in and play."

“Our plan right now is to have Andy ready to go,” Allen said. “He's performed at a high level in our league and that's really one of the big reasons why we brought him here is in case he's called upon, we feel highly confident that he can go in and do the job.”

Dalton has played twice before in London as the starter for the Cincinnati Bengals. They lost 24-10 to the Los Angeles Rams in 2019, three years after a 27-27 tie against Washington, then led by Cousins.

“They're used to all the ties in soccer, so they didn't think anything of it,” he said of the nearly 85,000 fans at Wembley Stadium.

Winston had been playing through a back injury but was held out of practice all week.

“I don’t think his body responded quite the way we anticipated over the first couple of days,” Allen said.

Earlier in the week, Winston said he was preparing to play against the Vikings.

Winston has thrown for 858 yards with four TD passes and five interceptions in three games. He has completed 63.5% of his passes.

Dalton stepped in to start nine games for the Cowboys in 2020 after Dallas starter Dak Prescott’s season-ending ankle injury in Week 5. Dalton completed 64.9% of his passes that season, throwing for 2,170 yards with 14 TDs and eight interceptions.

“When he’s played that much football, you don’t expect there to be any kind of nerves,” O’Connell said Friday. “We want to get off to a fast start defensively.”

The Saints are Dalton’s fourth team in as many years after he spent his first nine seasons as a starter for the Bengals.

Last year, Dalton appeared in eight games and made six starts for Chicago, completing 63.1% of his passes for 1,515 yards with eight touchdowns and nine interceptions.