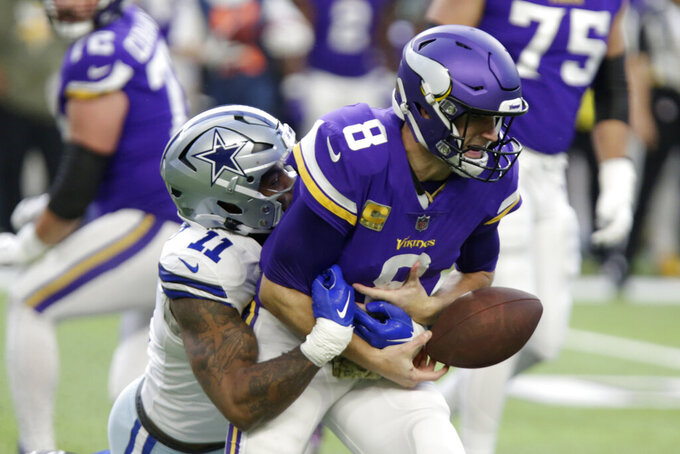 Minnesota Vikings quarterback Kirk Cousins (8) fumbles the ball as he is tackled by Dallas Cowboys linebacker Micah Parsons (11) during the first half of an NFL football game, Sunday, Nov. 20, 2022, in Minneapolis. (AP Photo/Andy Clayton-King)

MINNEAPOLIS (AP) — Lined up on the edge on Minnesota's first pass play, Micah Parsons worked around Vikings left tackle Christian Darrisaw and pursued quarterback Kirk Cousins from his blind side.

The Dallas Cowboys linebacker swatted the ball away from Cousins for a strip-sack. It was the start of a long day for Cousins and the Vikings' offense.

Cousins was sacked a career-high seven times for a loss of 49 yards. Minnesota had a season-low 183 total yards, and the Vikings were shocked at home 40-3 on Sunday.

“Kirk tried to battle tonight,” Minnesota coach Kevin O’Connell said. “It was a very tough night to play quarterback out there. We’ve got to do some things to help him any way, shape or form.”

Coming off an emotional, come-from-behind win at Buffalo a week earlier, the Vikings struggled from the outset, particularly against Parsons and the Cowboys’ league-leading pass rush.

Parsons said he saw a difference after his momentum-grabbing play on the first drive of the game.

“The ball was trying to come out quicker,” Parsons said. “(Cousins) was way more hesitant. Obviously, early pressure creates problems, and I thought we was coming all night. I think we definitely caused a problem in their pass game, especially for where they was trending at.”

Minnesota’s offensive line has been much improved this season, protecting Cousins well during an 8-1 start. Cousins was sacked 20 times in the first nine games, putting the Vikings 10th in the league in sack percentage allowance entering the week.

Darrisaw, who hadn’t given up a sack all season, surrendered two before leaving for the second straight week with a concussion. At one point, Minnesota had backups in at left tackle and left guard.

But Dallas mounted pressure all along the line, often with just four rushers as Cousins and the Vikings were forced to drop back frequently with a big deficit.

“It’s effective when you can rush four,” Cousins said. “Certainly, we want to be in a place where we’re not having to drop back too much. You certainly need to be in a game where you’re right there and you’re not behind where you have to drop back.”

Dallas has a league-high 42 sacks this season. With two sacks Sunday, Parsons is second in the NFL with 10, three behind New England’s Matt Judon.

Up next for Minnesota is a Thursday night game against Judon and the Patriots.

“That’s what they do,” O’Connell said. “We tried to get the run game going early and then we faced some third downs. Whether they were manageable or not, Kirk was under duress. And then when you lose your left tackle early in the game, sometimes you can try to move that hard down around and they just kept finding ways to affect Kirk.”

O’Connell said the Vikings tried to help protection on the outside, and the Cowboys caused problems on the interior. Sliding protection to help the interior only caused issues outside.

“We kind of took turns up front,” O’Connell said. “We took turns at different positions on our offense. Skill players included, had just an uncharacteristic performance by our offense.”

“They got a good front,” said Blake Brandel, who stepped in for Darrisaw for the second straight week. "We just didn’t step up to what we needed to do today.”