Giants using the time off during the bye to get healthy 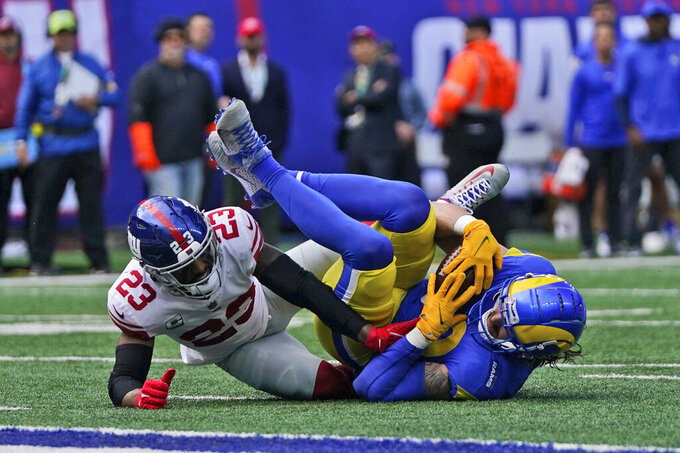 The second-year coach had split squads on Tuesday, one of two days the Giants (3-6) will work before getting four days off to relax during the bye.

The A-team for a lack of a designation by the team consisted mostly of the players who get the majority of time on game day, and some of the older guys. They got to work with the trainers and strength staff during the one-hour workout.

The rest of the team — the backups and practice squad players — were on the field for developmental work. There were also some meetings and self-scout sessions but nothing too strenuous.

“There’s a large focus right now trying to get our team healthy and fresh,” said Judge, whose team has dealt with injuries as much as opponents this season. “We had a lot of guys play a lot of snaps and they’ve done a good job for us. And there are some older guys I want to make sure get as much rest as they can this week.”

Coming off a win over the Raiders (5-3) on Sunday, the Giants are hopeful their ranks swell during the bye week.

Star running back Saquon Barkley, who has missed the past four games, and left tackle Andrew Thomas are expected back from ankle injuries. Wide receivers Kenny Golladay (knee) and rookie Kadarius Toney (ankle, thumb) just returned for the game on Sunday and saw limited action. The Giants still have 16 players on injured reserve.

Veteran safety Logan Ryan said getting everyone healthy is a must for the final eight games.

“That’s what we can control right now. We can control getting healthy, resting, cleaning up some things, watching film,” Ryan said. “But for sure, we need to get some guys back, have a strong push and we need to continue playing some good ball on defense and get some of our playmakers back on offense, and put it all together.”

This is a very different bye week for the Giants compared to last season. The COVID-19 outbreak forced them to work virtually during the bye week.

“We’ve done different things in different programs I’ve been in,” Judge said. “I think it’s important to do what’s best for your team at that time and not to try and follow some template of what’s going on."

The one thing Judge has refused to do this season is hurry players back into action. While he said he follows the advice of the team's medical personnel, he has been patient with injuries.

"You never know what’s going to happen, but I know guys are working hard like we’ve said to get back, so you’ve got take advantage of the time,” quarterback Daniel Jones said.