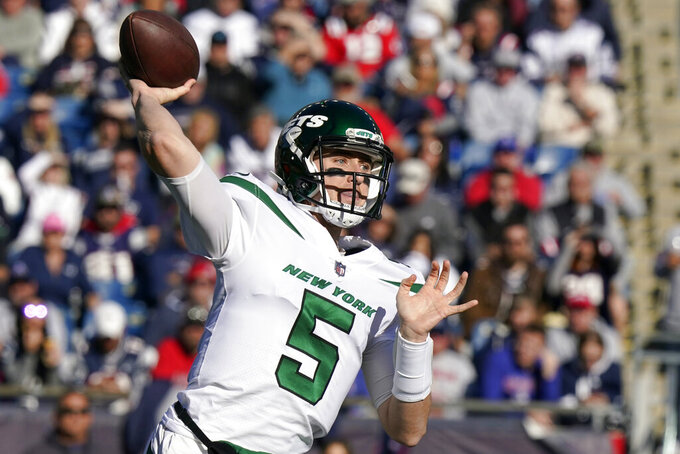 FILE - In this Sunday, Oct. 24, 2021, file photo, New York Jets quarterback Mike White (5) throws a pass during an NFL football game against the New England Patriots at Gillette Stadium in Foxborough, Mass. White was mostly unknown to casual football fans before last Sunday, when he stepped in for an injured Zach Wilson. The former Western Kentucky quarterback is now getting his first NFL start, and is relishing the chance to make a name for himself with the Jets. (AP Photo/Steven Senne)

From the mound to the huddle, White has come a long way.

Filling in Sunday for the injured Zach Wilson against the surging Cincinnati Bengals might sound like a lot of pressure for a guy who hadn't taken a snap in a regular-season game before last week. White simply brushes that off.

“Personally, I’m trying not to think of anything of that nature," he said Thursday. "Just go out there, play my game, have fun with my guys.

No doubt, especially when you consider White's journey.

The 26-year-old native of Pembroke Pines, Florida, grew up an outstanding athlete — particularly in baseball. He was a big, lanky right-hander with a solid fastball and impressive changeup, going 9-2 with a 0.43 ERA as a junior at NSU University School in Fort Lauderdale. He could also swing the bat, showing some nice opposite-field pop as a slugging first baseman, and had some Major League teams interested in drafting him.

White played football, too, but not until high school. And he didn’t focus solely on the sport until his senior year when he became the starting quarterback.

“Oh, it’s crazy,” White said. “I talk to all my friends that are in the major leagues like Luis Guillorme, the second baseman for the Mets. We played together a long time and we were talking the other day, and it’s funny how growing up I was all baseball. And then somewhere in high school, our paths just — I went football and everybody else kept baseball.”

He threw for more than 2,200 yards with 22 touchdowns and just two interceptions while leading the team to the 3A state championship. That led him to South Florida, where he started five games as a freshman before becoming the full-time starter as a sophomore.

But USF then changed its offense to a zone-read, running quarterback type of scheme.

“And that didn’t fit my skillset,” White said.

So, he transferred to Western Kentucky, sat out a year because of NCAA transfer rules and then played under Jeff Brohm and ran more of a spread offense. White thrived, throwing for 8,540 yards and 63 touchdowns with 15 interceptions in his two seasons with the Hilltoppers — and becoming a legitimate NFL draft prospect.

The 6-foot-5, 220-pound quarterback played well in the 2018 Senior Bowl, throwing two TD passes for his Bill O'Brien-coached squad. Despite a subpar showing at the NFL combine in Indianapolis, he was drafted in the fifth round by Dallas.

After White was waived by the Cowboys during their final cuts in 2019, the Jets signed him to their practice squad. He served as a backup to Sam Darnold the past two seasons, bouncing back and forth between the practice squad and active roster while never getting into a game.

He won the backup job this past summer, this time behind the No. 2 overall pick in Wilson. And with Wilson out for at least a few games with a sprained knee ligament, White is suddenly in the spotlight.

“I was talking to Josh Johnson the other day and I was telling him he might be in the NFL longer than I've played football now, just from starting in high school and things of that nature,” White joked of the Jets' 35-year-old backup QB who's in his 14th season of pro football. “So it’s cool. And even when you look back on it and and think of it in that aspect, it’s pretty funny.”

And it seems he made the right call by trading in his mitt for a helmet.

“I'd like to think so, yeah,” White said with a big smile.

White went 20 of 32 for 202 yards and a touchdown with two interceptions in New York's 54-13 loss at New England last Sunday, but impressed his teammates.

“He’s poised," wide receiver Corey Davis said. "That was the presence that was needed at that time. He came in and he did a great job.”

The coaches also liked what they saw from the backup — enough to give him the start against the Bengals.

“We're excited for him,” said senior offensive assistant Matt Cavanaugh, who spent much of his 14-year NFL playing career as a backup. “I've been encouraged watching him for weeks run the show team for the defense and standing in the pocket, making decisions, making accurate throws with a lot of bodies around him.”

The Jets traded for 36-year-old veteran Joe Flacco earlier this week, acquiring him from Philadelphia after he spent last season in New York. It's uncertain as to whether Flacco, whom White texted to welcome back when he heard the news, will take over as the starter until Wilson is ready.

Or if this will remain White's job for now.

“It’s exciting,” White said. “I mean, it’s what you grow up dreaming of as a little kid. So that aspect of it, there’s a lot of excitement to it. But (the way) I’ve gone into this week and attacked this week is try not to make it more than what it is.

"We’re going out there on Sunday, I’m going to try to help this football team win and do my job.”