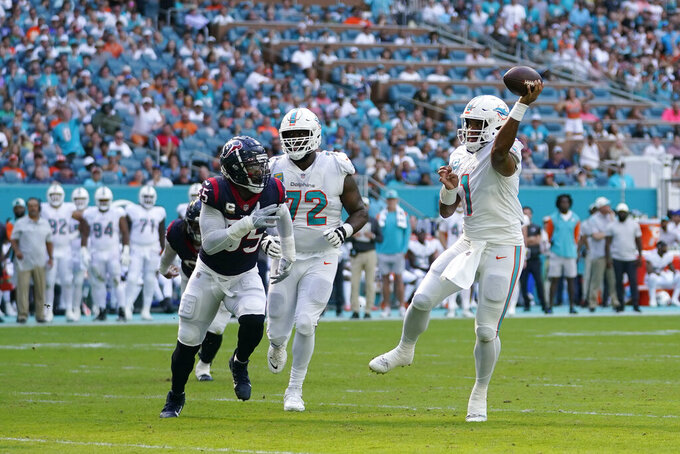 SANTA CLARA, Calif. (AP) — When Kyle Shanahan got his first job as an NFL position coach, Mike McDaniel was right there as his assistant.

From that first time together in 2006 in Houston to stints in Washington, Cleveland, Atlanta and finally San Francisco, as Shanahan moved, McDaniel followed, with the two coaches spending 14 of the next 16 seasons together.

“Wherever I went, except a couple years he was out, he was always my assistant, so we were always grooming him and working on things together,” Shanahan said.

Now the relationship enters a new chapter when the two coaches will face each other for the first time when McDaniel's Miami Dolphins (8-3) visit his old stomping grounds to take on Shanahan's 49ers (7-4) on Sunday.

“It will be odd for a second, for sure, to be in a different locker room, or pulling up on the bus in a weird area, or being on a different sideline for a second, I’m assuming — just odd as in abnormal,” McDaniel said. “But after that, my obligation is to serve each and every player and coach and try to get the best out of them.”

McDaniel has done just that this season in his first year as coach of the Dolphins, helping develop quarterback Tua Tagovailoa and running one of the league's most potent offenses.

McDaniel has evolved the offense Shanahan ran in San Francisco to take advantage of a roster that features speedy receivers Tyreek Hill and Jaylen Waddle.

“I owe a lot to him in general,” McDaniel said. “I will be forever grateful, and I think he’s always been one of the best, if not the best, offensive coaches and head coaches that I’ve ever had experience being around.”

The feelings are mutual, as Shanahan said McDaniel was a key part of the success he has had as a coach.

“I’d always say he was our computer, like what did I say on this last year at this time, and Mike could always retain that stuff and was really good at it,” Shanahan said.

The Niners defense has responded well after a rough game in Week 7 against Kansas City when the Chiefs put up 44 points with six TD drives. San Francisco hasn't allowed a point in the second half in the last four games and had its first shut out last week since 2019 with a 13-0 win over New Orleans.

The 49ers are far from satisfied, especially knowing they will get a much tougher test against a Miami team that has tied a franchise record by scoring at least 30 points in four straight games.

“We could have been better in the game, which is saying a lot because we shut them out,” defensive end Nick Bosa said. “But as a D-line, I think there’s more that we could have gotten out of that game and the standards that we hold ourselves to is great because we’re not satisfied with even a shutout and one sack. We want more and we’re going to keep keep pushing for more.”

The Dolphins may not have to face Bosa and San Francisco’s vaunted defensive front without veteran left tackle Terron Armstead, though he may be significantly limited after suffering a pectoral injury against Houston.

Mike McDaniel said Armstead will be game-to-game but did not rule out a potential return Sunday.

“You can rest assured that he’ll do everything possible,” McDaniel said. “And if he’s unable to go, it would be because it would put himself and his teammates in harm’s way.”

If Armstead is unable to go, Greg Little would likely step in at left tackle, and with right tackle Austin Jackson (ankle) likely out Sunday, Brandon Shell figures to be his replacement.

‘WE HAVE TO RELY ON HIM’

Waddle’s teammates and coaches have been just as impressed with his attitude off the field as his speed and production on it.

After Sunday’s game in which Waddle broke the Dolphins’ record for the most yards receiving (1,978) in the first two seasons of a career, Tagovailoa complemented Waddle’s curiosity.

“He has a lot of questions every time. And if he doesn’t get them answered, then he’s not going to be in for that play,” Tagovailoa said. “Very detail-oriented person.”

McDaniel said he admired Waddle’s willingness to be coached despite having so much talent.

“You’re constantly hoping that yesterday’s version was the worst version of yourself that you’ll see moving forward, that you’re constantly getting better,” McDaniel said. “And that’s something that he has proven to his teammates that he’s a really good player. We have to rely on him to make plays for us to play the style of football we want to play.”