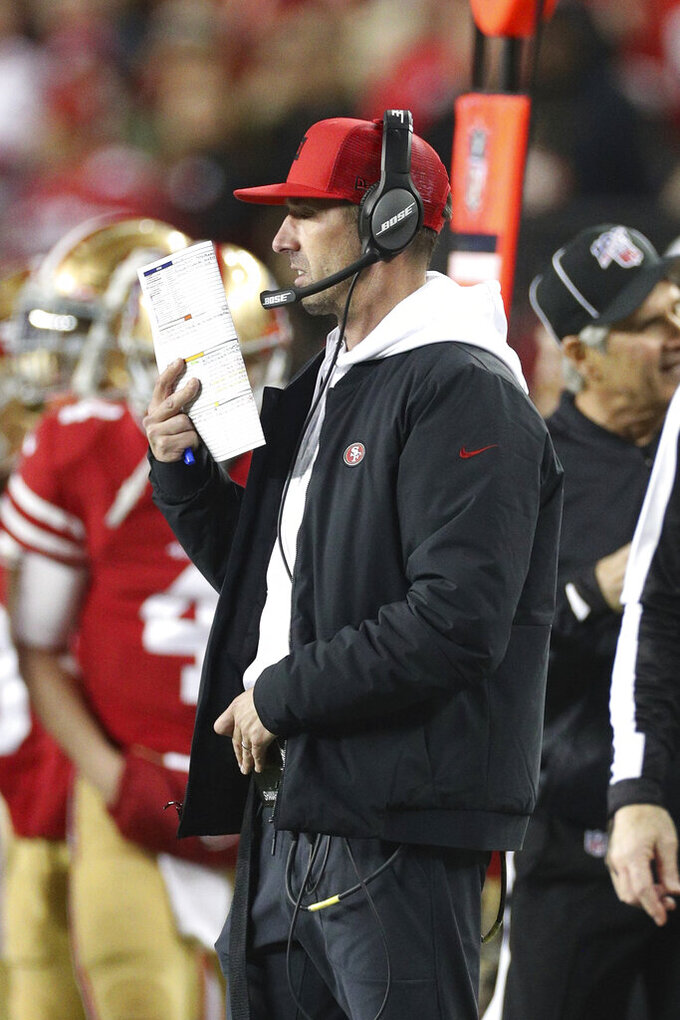 SANTA CLARA, Calif. (AP) — Kyle Shanahan's play calls from his first trip to the Super Bowl as an offensive coordinator have been heavily scrutinized.

That's to be expected after Shanahan's Falcons blew a 28-3 lead to the New England Patriots and lost in overtime three years ago in part because Atlanta was unable to run out the clock or add to the lead.

Shanahan is back in the title game as head coach for the San Francisco 49ers. That's led to a rehashing of that game in Houston even if Shanahan has put it far behind him.

"Not much at all anymore, to tell you the truth," he said this week when asked if he still goes over that game. "You do it every second. The days after were real tough. Losing a Super Bowl is extremely tough for everybody, especially when you lose one when you have a 28-3 lead. The way it came down on me personally, I didn't react to that, the way people would expect, because there were definitely parts in that Super Bowl that I would love to have back and stuff I was very hard on myself, but the whole narrative of if I would've just ran it, we would've won. I know that wasn't the case."

Shanahan said there's just one play call he'd like to have back from that day and it's not calling for a third-down pass midway through the fourth quarter that led to a sack-fumble that allowed the Patriots to make it a one-possession game.

The call he'd like back came on the next drive after the Falcons had used two long pass plays to move the ball down to the New England 22 with less than five minutes left.

Three straight runs could have forced the Patriots to burn their timeouts and led to a field goal that would have given Atlanta an 11-point lead that might have been too much for even Tom Brady to overcome.

But after losing a yard on a first-down run, Shanahan called for a pass play that he still regrets.

"They played a different coverage, didn't get the call I wanted so I didn't like the call," he said. "I was hoping we could just get rid of it, but they had a pretty good rush and got a sack."

Now backed up to the 35, Shanahan called for another pass to get back into field-goal range on third down only to have a 9-yard gain negated by a holding penalty. An incompletion on third down led to a punt from the 45, setting up Brady's game-tying drive.

"I wish I didn't call that play on second-and-11 that led to that sack," Shanahan said.

Now the coordinator who called one too many pass plays in his first trip to the Super Bowl is back to the title game as a head coach with one of the most run-dominant play scripts in NFL history.

The 49ers have run the ball on about three-quarters of their plays so far this postseason, the highest rate of runs in the playoffs since Don Shula's Dolphins threw the ball just 31 times with Hall of Famer Bob Griese at quarterback on the way to the championship following the 1973 season.

Jimmy Garoppolo threw the ball just 19 times in the divisional round win over Minnesota and then was limited to eight passes last week in the NFC championship game against Green Bay.

Shanahan instead has kept dialing up successful runs, including a trap play on third-and-8 that led to a 36-yard touchdown run by Raheem Mostert to open the scoring last week against the Packers.

The Niners have run the ball 89 times the past two games, something Shanahan might have been more hesitant to do earlier in his coaching career.

"I didn't play o-line growing up," he said. "So, when I first became a coach all I wanted to do was throw it. I played receiver and quarterback my whole life. So, that's all you want to do. And you lean toward that, but the longer you do it, you realize that no matter how cool of passes you can draw up, you've got to protect, you've got to do things, you can't put all the pressure on the quarterback. And the thing that does make it a lot easier is being able to run the ball. Running the ball takes pressure off everyone and puts pressure on the defense."