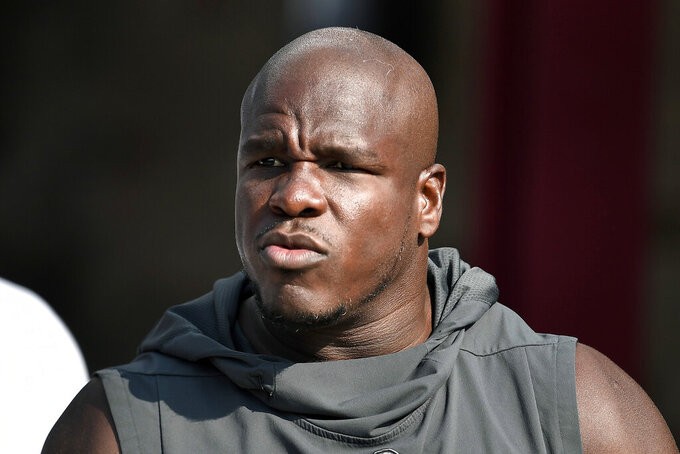 FILE - In this July 25, 2019, file photo, Buffalo Bills running back Frank Gore walks onto the field during practice at the NFL football team's training camp in Pittsford, N.Y. Running back Frank Gore has agreed to terms on a one-year contract with the New York Jets, agent Drew Rosenhaus announced Tuesday, May 5, 2020. (AP Photo/Adrian Kraus, File)

NEW YORK (AP) — Frank Gore's likely run to Canton will go through the Big Apple for at least one season.

The seemingly ageless running back, who turns 37 next Thursday, agreed to terms on a one-year contract with the New York Jets on Tuesday.

Gore is third on the NFL’s career rushing list with 15,269 yards after passing Barry Sanders on the list last year while with Buffalo. With the Jets, Gore will join a backfield that includes Le’Veon Bell and fourth-round draft pick La’Mical Perine.

New York had not yet announced the signing, which reunites Gore with coach Adam Gase, for whom he played in Miami in 2018. The two were also together in San Francisco in 2008, when Gase was an offensive assistant.

Gore, who many believe will someday be enshrined in the Pro Football Hall of Fame, trails only Emmitt Smith (18,355) and Walter Payton (16,726) in yards rushing in NFL history.

Gore spent last season with Buffalo, where he had career lows with 599 yards and 3.6 yards per carry in 16 games while sharing the backfield with rookie Devin Singletary. The veteran had two touchdown runs and also caught 13 passes for 100 yards.

But Gore won't be asked to shoulder the load in New York — something Bell had to do last season in his first year with the Jets. Bell ran for 789 yards after sitting out a season with Pittsburgh in a contract dispute, but his 3.2 yards per carry were the lowest of his career.

Gase told ESPN.com in a podcast last week that the hope was the Jets would be able to “lessen the load” on the 28-year-old Bell by incorporating other backs and keeping Bell fresh and effective as the No. 1 rusher.

Gore would certainly be able to help fill that role. But it will also raise some eyebrows about Bell's working relationship with Gase, whose inconsistent usage of Bell last season was sometimes questioned.

Gore spent his first 10 NFL seasons with San Francisco after being selected in the third round out of the University of Miami in 2005. He then played three seasons with Indianapolis before playing one year each for Miami and Buffalo.

In Gore's latest stop in the AFC East — he now has only not been with New England — he could also provide mentorship to Perine, for whom New York has high hopes. The Jets also have Josh Adams, Trenton Cannon, Kenneth Dixon and Jalin Moore on the roster.

Gase raved last season about Gore's professionalism and ability to play at a high level despite being at an age when most NFL players — let alone running backs — are long retired. In fact, Gore's son Frank Jr. — also a running back — is committed to play at Southern Miss.

“It’s unbelievable,” Gase said last September before New York's season opener against Buffalo. "If you watched him work day-in and day-out, it wouldn’t surprise you. We would always say, 'Hey, we think you should take today off,’ and he’s like, “Wednesdays, I’m practicing,” and he wants every rep. You’re in full pads and he’s going at it like it’s Sunday. That’s just how he looks.

“That’s how he’s always been. He loves football. There’s no other place he’d rather be than the practice field, gameday. Everything about football, he loves.”