Another late rally by Ravens, this time with backup QB 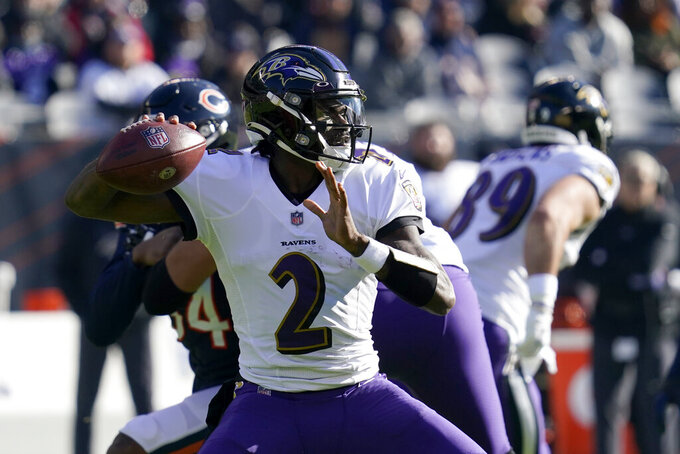 OWINGS MILLS, Md. (AP) — No matter who is at quarterback, the Baltimore Ravens are a tough team to put away in close games.

This time it was Tyler Huntley, forced into action because Lamar Jackson was ill, who led Baltimore to a touchdown in the final minute Sunday for a 16-13 victory at Chicago. It was the first start of Huntley's career, and he helped the Ravens stay alone atop the AFC North with another come-from-behind win.

In addition to the dramatic victory over Chicago, the Ravens (7-3) also have overtime wins over Indianapolis and Minnesota this season. They beat Detroit on a 66-yard field goal at the end of the fourth quarter, and they held off Kansas City because of a late fumble.

“Like anything else, you get experience with something, you get more comfortable in that type of a situation," coach John Harbaugh said Monday. "I think our guys are content in every circumstance right now, in every football circumstance, and determined to try to find a way to win.”

For most of the season, Jackson was Baltimore's ace card. No matter who else was injured or how poorly the Ravens were playing, if Jackson was in the game, they had a chance. Then they lost him and were still able to win, albeit against a Chicago team that isn't all that threatening and lost its own starting quarterback during the game.

Jackson's status will be a big topic going forward this week. This was only the third game he's missed since becoming Baltimore's starter in the middle of the 2018 season.

“He was feeling much better today from what I was told," Harbaugh said. "I haven’t seen him.”

NFL teams talk about a “next man up” mentality so much that it’s become a cliché, but the Ravens this season really have embodied that mantra. Not only was Jackson out, but top receiver Marquise Brown (thigh) also missed the Chicago game.

“It's been that way all year,” Harbaugh said. "Every single week has been a challenge in terms of who's going to be up and down, so we've got to get everybody ready.”

Huntley threw for only 219 yards and was intercepted once, but he completed 26 of 36 passes, and at the end, he kept his cool enough to guide Baltimore on a 72-yard touchdown drive in 1:19, which ended on Devonta Freeman's 3-yard scoring run with 22 seconds to play.

“I think if I was feeling the pressure, we probably wouldn’t even have won this game. You’ve just got to go with the flow about winning the game,” Huntley said. “We knew we had to go down there and score, so we practiced that every day in practice, two-minute drill, so that’s all it came down to.”

A generally strong defensive performance was nearly undone by two big plays — the kinds of touchdowns that have plagued the Ravens all season. Poor tackling turned a short pass into a 60-yard TD in the third quarter, and cornerback Chris Westry was beaten deep on fourth down for the 49-yard touchdown that gave the Bears a 13-9 lead with 1:41 left.

“There was some consoling going on, even after the game with the win, in the locker room," Harbaugh said. "It's a great learning experience, but it's also just a great growing experience. It's kind of a privilege as a coach to be a part of that, a little bit. The response to events.”

Sammy Watkins has been limited by injury problems this year, but his 29-yard reception on third-and-12 set up the winning TD by Freeman.

Tackle Alejandro Villanueva had one of the lowest offensive grades on the team Sunday from Pro Football Focus, and he had a big holding penalty that put Baltimore in that third-and-long situation that they converted on the pass to Watkins.

Not all the news was bad for Baltimore on the health front. Tight end Nick Boyle made it back from his knee issues and played for the first time in just over a year.

14 — The number of first downs the Ravens allowed. Baltimore has generally done OK this season in terms of preventing sustained drives. It's the big plays that have been a problem for the defense.

Baltimore hosts Cleveland on Sunday night. The Browns are in last place in the division — but just 1 1/2 games behind the Ravens. Five of Baltimore's final seven games are against AFC North teams.