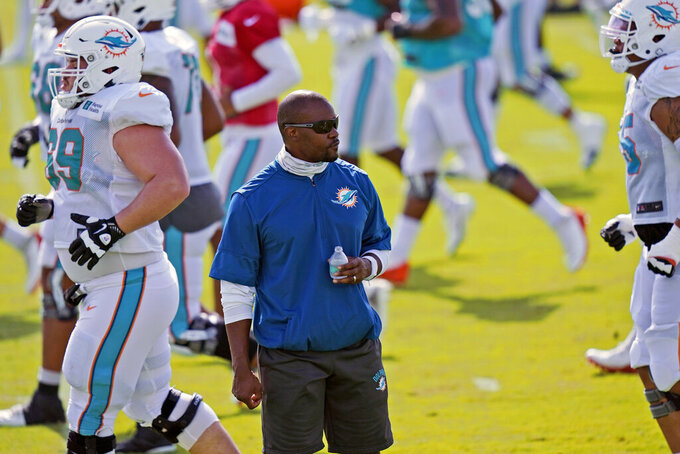 FILE - In this Aug. 21, 2020, file photo, Miami Dolphins head coach Brian Flores watches practice at the NFL football team's training facility in Davie, Fla. The Dolphins roster appears significantly upgraded by the draft and free agency, but the coronavirus pandemic curtailed offseason training. As a result, the Dolphins' 2020 season might be similar to 2019, when they were much better in December than in September. (AP Photo/Lynne Sladky, File) 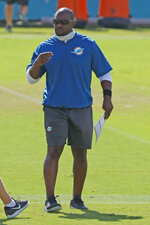 MIAMI (AP) — Eager to get to the practice field one morning, Miami Dolphins coach Brian Flores had an asymmetrical look he blamed on what he called his “quarantine haircut.”

Someone dared to suggest a razor could fix the problem in 10 minutes.

Season 2 of the Dolphins' rebuilding project under Flores is about to begin, and the coach's to-do list remains long. The roster appears significantly upgraded by the draft and free agency, but the coronavirus pandemic curtailed offseason training, leaving Flores with little time to integrate newcomers.

As a rookie head coach he won rave reviews, but given the nature of the NFL, Flores knows that won’t buy him much goodwill going forward.

In 2019 the Dolphins endured a historically bad start and record roster turnover to finish 5-11, including a season-ending upset win at New England, snapping Miami's streak of 11 consecutive losses in Foxborough.

This year's team might again be much better in December than in September.

“A lot of these guys haven’t played together, and we’re just kind of trying to build continuity,” Flores said. “We’re still in the beginning stages from that standpoint, so we’ve got a long way to go. It’s a young team, and it’s an inexperienced team.”

During the Dolphins' two-decade drought without a playoff win, two of Flores' predecessors were unable to build on strong starts as rookie coaches. Tony Sparano won the AFC East in 2008, and Adam Gase went 10-6 in 2016 for Miami's only playoff appearances in the past 18 years.

Both were subsequently fired by owner Stephen Ross.

Still, there's a sense within the franchise and beyond that Ross has finally found a coach who can become a consistent winner. Last year Flores managed to keep the locker room together even after the Dolphins were outscored 163-26 in their first four games.

“To watch how he handled the good, the bad, the ugly throughout the season, he was the same guy,” said Flores' special teams coach, Danny Crossman. "You know where Flo stands on what he’s going to demand, and if you’re not on board with that, it’s going to be a long day. But if you are on board, it’s going to be a fun rebuild.”

One outside-the-box move that could help determine whether Flores succeeds was to lure 68-year-old Chan Gailey out of retirement to become offensive coordinator this year.

The locker room now bears little resemblance to the one Flores inherited 19 months ago. This year Miami spent more on free agency than any other team, and added three first-round draft picks, including potential franchise quarterback Tua Tagovailoa.

While the roster is different, the head coach is too.

“You can kind of see growth with a coach going from Year 1 to Year 2,” said defensive tackle Christian Wilkins, Miami’s top draft pick in 2019. "I’m not saying he was a bad coach or anything last year, or had many flaws or anything, but you could still kind of see growth. And it’s good to see that, and just his confidence and everything. He’s a great leader for us to follow.”

He's leading in a time of protests against racial injustice. The son of Honduran immigrants, Flores is one of three Black head coaches in the NFL, and he grew up in a Brooklyn neighborhood beset by gangs and poverty.

He has spoken passionately about the protests, including those in Kenosha, Wisconsin, following the police shooting of Jacob Blake.

“I’ve lived this,” Flores said. “I grew up in this era. I’ve had guns pointed at me by police officers. This is not something I take lightly. ... We need change.”

Before a recent practice, Flores and his players met on the field for 20 minutes and discussed ways to combat racism. On another morning, as the team warmed up for a scrimmage, he put his arm around Ryan Fitzpatrick to console the veteran quarterback, who had just learned of his mother's death.

Flores' players say they appreciate that he sees the big picture.

“I feel like you don’t get that too often at the pro level,” said Wilkins, the Dolphins' player representative. “It’s great to know you’ve got a coach who’s in your corner, that has your back, that’s very supportive of you as people and as men, not just as players.”

Austin Clark joined the Dolphins in January as outside linebackers coach. Before accepting the job, he researched Flores' background.

“To me," Clark said, “that immediately was like, ‘Hey, this is someone I want to work under and learn from — just how he came up and the grind and where he’s come from, his story, all of the obstacles he has gone through. He’s got a mission.”

The mission is now focused on Sept. 13. That's when the Dolphins open the season, with Flores trying to become the first Miami coach since Don Shula to win at New England two years in a row.

There's little time for a haircut, because in the NFL, the obstacles just keep coming.