Don Shula at 90: His wife says he has a 'beautiful life' 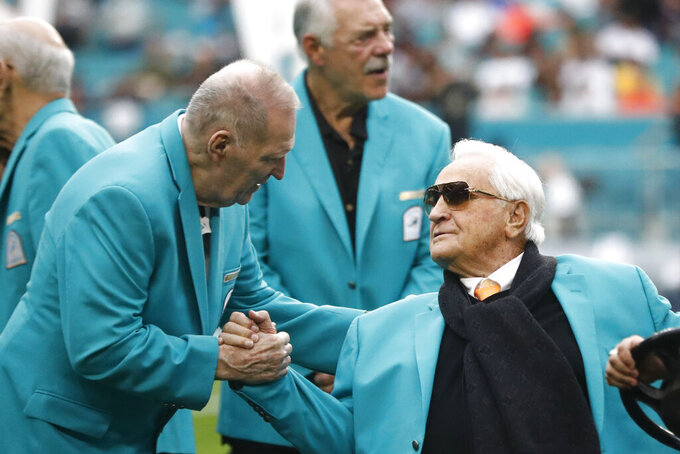 Former Miami Dolphins head coach Don Shula is greeted on the field by former players during half time at an NFL football game against the Cincinnati Bengals, Sunday, Dec. 22, 2019, in Miami Gardens, Fla. The 1972 undefeated team was celebrated on the field. (AP Photo/Brynn Anderson)

MIAMI (AP) — Don Shula has been about longevity for, well, a long time.

He entered the NFL as a player in 1951 and retired in 1995 after coaching the Miami Dolphins for 26 years. He won more games than any coach in league history, a record that has stood for, coincidentally, 26 years.

Shula's birthday is Saturday. Anderson and others who played for the coach threw a surprise party for him last month, and about 100 people attended.

“He said, ‘Where were all of you when I turned 89?’” Pro Football Hall of Fame quarterback Bob Griese said.

“It was the first time in the entire time I’m known him where he was genuinely surprised,” Hall of Fame fullback Larry Csonka said. “I think he was very happy.”

“He's a little tired from all the things going on during the holidays,” she said Friday. “But he's doing fantastic. It's amazing to be 90. He's still telling lots of jokes. He's content, happy, fulfilled and has a beautiful life.”

The family birthday party was last Saturday, and last summer the Shulas took a cruise to six European countries with 37 family members.

The couple have 16 grandchildren and five great grandsons, but no great granddaughters — yet.

“There's a lot of potential out there,” Mary Anne said with a laugh.

Shula and his wife spend the summer months in Pebble Beach, California, and are in South Florida most of the year. He likes to go with Griese to the horse races at Gulfstream Park.

“He’s doing great for a 90-year-old guy,” Griese said. “You ask him the starters on the ’72 Dolphins team, and he can name every player. We have a good time kidding back and forth.”

Shula mostly uses a wheelchair these days and has been feeling better since a heart procedure in 2016.

“He didn’t want to go into the hospital,” Anderson said. "When they finally got him to go in and he had some stents put in, his health got much better. His legs are bad, but he's still the ornery cuss he always was.”

Said former defensive tackle Maulty Moore: “Back in the day, if you did something wrong, he would run up and get in your face. We all have to come to him now.”

Shula was born Jan. 4, 1930, in Grand River, Ohio, and has outlived many of the players he coached with the Dolphins and Baltimore Colts. Hall of Fame center Jim Langer, Hall of Fame linebacker Nick Buoniconti and guard Bob Kuechenberg, all starters on Miami's perfect season team, died last year.

But Shula remains living history. A 10-foot statue of the coach stands at the entrance to the Dolphins' stadium, and it looms large because the team hasn't been to an AFC championship game, much less the Super Bowl, since he retired.

Shula attends games when he's in town. The crowd sang happy birthday to him at this season's home finale, when the Dolphins honored their 1972 team, recently selected the greatest ever as part of the NFL's 100-year celebration.

Shula coached that team to a 17-0 record, still the only perfect season in league history.

“An undefeated season is a coaching miracle,” said Doug Swift, a linebacker on the 1972 team.

Those 17 victories were part of Shula's record total of 347. Bill Belichick, 67, heads into this weekend with 304 and could overtake Shula in a few years.

But Shula, who has long disliked Belichick, need not worry about where he ranks with his former players.

“His legacy will never change,” Hall of Fame guard Larry Little said. “In my book, he’ll always be No. 1.”

For the Dolphins, Shula's greatness never gets old.