It's Jones vs. Haskins when Giants visit Redskins 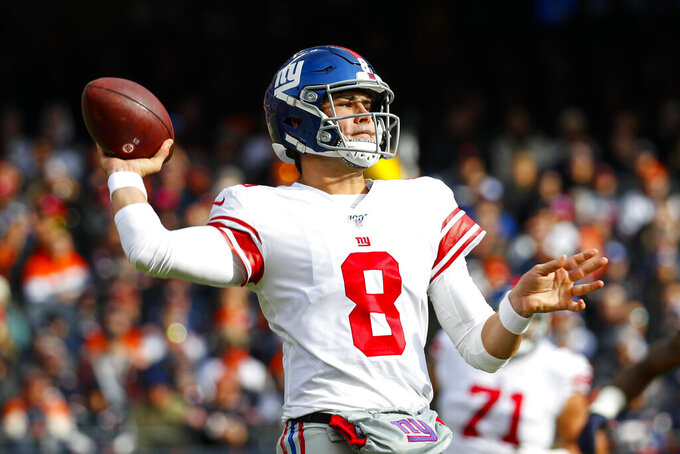 LANDOVER, Md. (AP) — The first time Daniel Jones and Dwayne Haskins faced off in an NFL game, it wasn’t pretty.

Jones came out on the winning end in his second pro start with the New York Giants but threw two interceptions. Haskins entered in relief when Case Keenum struggled and tossed three picks in his debut for the Washington Redskins.

Jones and Haskins start against each other for the first time Sunday when the 3-11 Giants visit the 3-11 Redskins. The showdown between the No. 6 and No. 15 overall picks is also a showcase of two rookie quarterbacks who are making significant progress with an eye toward next season and beyond.

“I think the way to learn and how to play this game is by playing it and they’ve both been able to play many games and that’s how you learn: by doing it,” Giants coach Pat Shurmur said. “Everybody comes into this league and starts playing and it’s different. For Daniel and Dwayne, they’ve had a chance to play and play a lot. I think that’ll help them in their development.”

Jones since the first Washington game has thrown for 15 touchdowns and nine interceptions and looks ready to return from missing the past two weeks with an sprained right ankle. Haskins has five TDs and four interceptions but has made major strides with six starts under his belt.

“His confidence is obviously there,” Redskins receiver Terry McLaurin said. “I feel like his growth has been monumental since that (the first Giants game), and that's what you want to see over the course of a season: your players get better, but especially your rookie quarterback. He's controlling what he can control, and he's taking what the defense gives him.”

Jones was given the reins earlier than Haskins and is at the stage where he’s honing aspects of his game. Ball security is the Duke product’s top priority, and he’d like to be more mobile.

“It’s showing the coaches and the trainers that I can do everything and I’m able to move around like I need to,” Jones said. “Whether that’s in the pocket or getting out of the pocket, I’m able to do all those things.”

BACK IN THE GROOVE

Giants running back Saquon Barkley ran for 112 yards and two touchdowns against the Dolphins. It snapped a career-high, seven-game 100-yard rushing drought.

The No. 2 pick overall in 2018 opened the season with 100-yard games against Dallas and Buffalo and then sustained a high ankle sprain just before halftime the following week. He missed three games and never had more than 83 yards in the seven games after his return.

The 100-yard rushing performance was the 10th of Barkley’s career, tying him with Ron Johnson for seventh on the franchise’s career list.

Also watch out for wide out Sterling Shepard. He had nine catches for 111 yards last week. His best game since returning on Nov. 24 from his second concussion of the season.

McLaurin is 94 yards from setting the franchise record for yards receiving by a rookie. One of Washington’s team MVPs this season, McLaurin is more focused on the 167 yards he needs to reach 1,000.

“I had a goal of coming in and hopefully reaching 1,000 yards, but I didn't know all the adversity was going to go into this season,” McLaurin said, referring to the Redskins coaching change and starting three different quarterbacks. “If it comes, it comes. If it doesn't, it doesn't. I won't cry any tears. I just try to be as productive as I can for this team and hopefully down then line, if it doesn't happen this year, then possibly next year.”

While the Giants defense has struggled most of the season, one area of improvement has been the pass rush.

They sacked Miami's Ryan Fitzpatrick three times this past weekend and have 32 sacks, two more than last season.

Linebacker Markus Golden leads the team with nine sacks, the highest total by a Giants player since Robert Ayers had 9 1/2 in 2015. Rookie linebacker Oshane Ximines is second with 4½ sacks, and tackle Dalvin Tomlinson is third with a career-best 3½.

Redskins punter Tress Way got very emotional after interim coach Bill Callahan told him he’d be going to the Pro Bowl for the first time.

Callahan said Way would wear a “C” on his jersey as team captain for the final two games of the season.