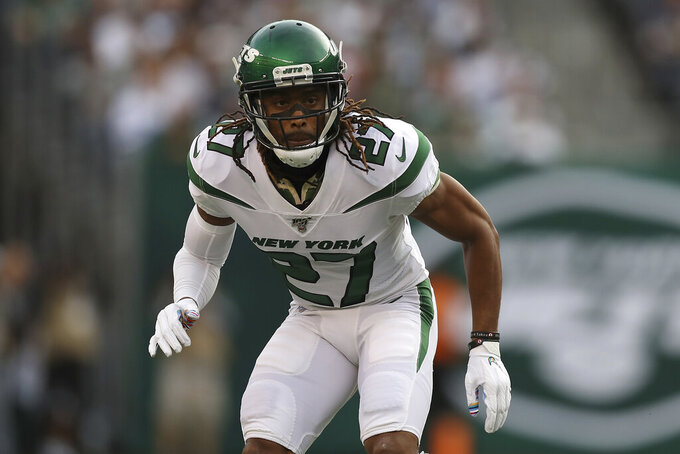 FILE - In this Sunday, Oct. 13, 2019 file photo, New York Jets cornerback Darryl Roberts (27) in coverage during the first half of an NFL football game against the Dallas Cowboys in East Rutherford, N.J. The New York Jets have released cornerback Darryl Roberts after four seasons with the team as a sometime starter and valuable backup, Saturday, March 21, 2020. (AP Photo/Steve Luciano, File)

The makeover with the big boys up front is on. In a big way.

Two people with direct knowledge of the deal told The Associated Press on Saturday night that the Jets and former Carolina Panthers guard Greg Van Roten agreed to a three-year contract. The people spoke to The Associated Press on condition of anonymity because teams can't announce deals until they are officially signed, per NFL rules.

A busy Saturday for the Jets included the team releasing cornerback Darryl Roberts, a sometime starter and valuable backup. Another person with direct knowledge of the deal said New York and former Los Angeles Rams safety Marqui Christian agreed to a one-year deal worth up to $2 million.

The offensive line struggled with injuries and inconsistency last season in front of quarterback Sam Darnold. So, Douglas insisted that unit would be a priority to address during his first full offseason as the Jets' general manager.

So far, he has stuck to the plan.

Lewis, who took over at left guard after Kelechi Osemele was injured early last season, could end up being the only returning starter — especially with right guard Brian Winters' future with the team now uncertain. He is due to cost the Jets $7.28 million on the salary cap and could be released.

The 30-year-old Van Roten played left guard during three seasons with the Panthers, so he or Lewis could end up shifting to the right side if Winters is cut. Van Roten started 11 games last year before dislocating a toe and finishing the season on injured reserve.

The Long Island native wrote, “I'm coming home” in a Twitter post, and followed that with another tweet that included a picture of himself as a youngster wearing a Jets uniform on Halloween. “It's been a long time coming!” Van Roten wrote.

He was originally signed by Green Bay as an undrafted free agent out of Penn in 2012 and spent time with Seattle in 2014 before playing for Toronto in the Canadian Football League for two seasons. He returned to the NFL in 2017 when he joined Jacksonville, and was signed by Carolina later that year.

Andrews spent the last two seasons with Indianapolis and played in nine games with the Colts during that span. The 28-year-old guard/center was signed by Philadelphia as an undrafted free agent out of Oregon State in 2014 and spent four seasons with the Eagles. He signed with Minnesota in 2018 before ending up back in Philadelphia for a second stint and eventually being signed off the Eagles' practice squad by the Colts.

Douglas also continued to address the cornerback spot, releasing Roberts three days after cutting Trumaine Johnson as the team parted ways with both of last season's starters at the position.

The move Saturday saved the Jets $6 million — Roberts' entire salary due — on the cap for the upcoming season. New York had to make a decision by the end of the day on Roberts, who would have had $2 million of his salary become fully guaranteed.

The 29-year-old Roberts started 10 games in each of the last two years, including sliding over to safety for two games last season when Jamal Adams was injured. Roberts also was a key player on special teams.

Last season was marked by inconsistent play and a calf injury that sidelined him for three games. Roberts was then replaced in the starting lineup by Arthur Maulet, and Roberts didn’t start again at cornerback.

The cornerback spot will have a new look this season, although New York re-signed nickel cornerback Brian Poole on Wednesday — a move the team made official on Saturday — and brought back Maulet on Friday after not offering him a restricted free agent tender.

Roberts was drafted by New England out of Marshall in 2015, but missed the season after injuring a wrist in the preseason. He was among the Patriots’ final cuts in 2016, and the Jets claimed him off waivers. Roberts gradually worked his way into a regular role on defense, and earned a three-year, $18 million contract extension with the Jets last offseason. He was scheduled to count $7.5 million on the salary cap in 2021.

Christian was a fifth-round pick of Arizona in 2016 out of Midwestern State and spent the last four seasons with the Rams. Primarily a safety, the 25-year-old defensive back has also been a key special teams contributor in his NFL career.