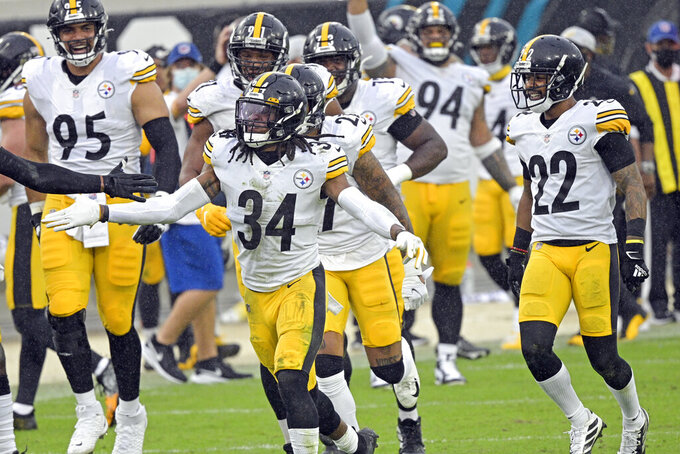 Pittsburgh Steelers safety Terrell Edmunds (34) celebrates with teammates after he intercepted a Jacksonville Jaguars pass during the second half of an NFL football game, Sunday, Nov. 22, 2020, in Jacksonville, Fla. (AP Photo/Phelan M. Ebenhack)

NEW YORK (AP) — The Pittsburgh Steelers are a perfect 10.

And they're also once again No. 1 in the latest AP Pro32 poll.

The Steelers improved to 10-0 for the first time in franchise history with a 27-3 rout of the one-win Jacksonville Jaguars.

Pittsburgh received 10 of the 12 first-place votes for 382 points in balloting Tuesday by media members who regularly cover the NFL.

And the Steelers have a quick turnaround as they're scheduled to host the rival Baltimore Ravens on Thanksgiving night.

“After a layup win over the Jaguars, the Steelers can take another decisive step forward with a win over the Ravens and keep an eye on winning the all-important No. 1 seed in the AFC,” Newsday's Bob Glauber said.

The Kansas City Chiefs, who are coming off a 35-31 win over Las Vegas, stayed at No. 2 in the poll. The Chiefs earned the remaining two first-place votes for 374 points.

And even without Drew Brees, the New Orleans Saints remained at No. 3. Backup quarterback Taysom Hill led the Saints to a 24-9 win over the Atlanta Falcons. The 41-year-old Brees is out at least two more games because of fractured ribs.

The Los Angeles Rams climbed four spots to No. 4 after holding off the Tampa Bay Buccaneers for a 27-24 win on Monday night. The Rams moved atop the NFC West and into the No. 2 spot in the conference’s playoff race while the Buccaneers slid five spots to No. 10.

“The Rams reminded us that they’re one of the NFC’s best teams with back-to-back wins against Seattle and Tampa Bay,” said Jenny Vrentas of The Monday Morning Quarterback. “And this season, it’s (coordinator) Brandon Staley’s defense that is leading the way.”

The Buffalo Bills, who are coming off a bye, moved up one spot to No. 5.

In an unusual twist, three teams, each 7-3 on the season, are tied at No. 6: the Seattle Seahawks, Green Bay Packers and the Indianapolis Colts. The Seahawks gained seven spots, the Colts jumped five places and the Packers slipped two places after Indy outlasted the Packers 34-31 in overtime on Sunday.

“If Philip Rivers keeps playing like he did against Green Bay, the Colts are a dangerous team heading toward the postseason,” said Alex Marvez of Sirius XM.

The Tennessee Titans, tied with the Colts for the AFC South lead, also moved up five spots to No. 9 in the poll.