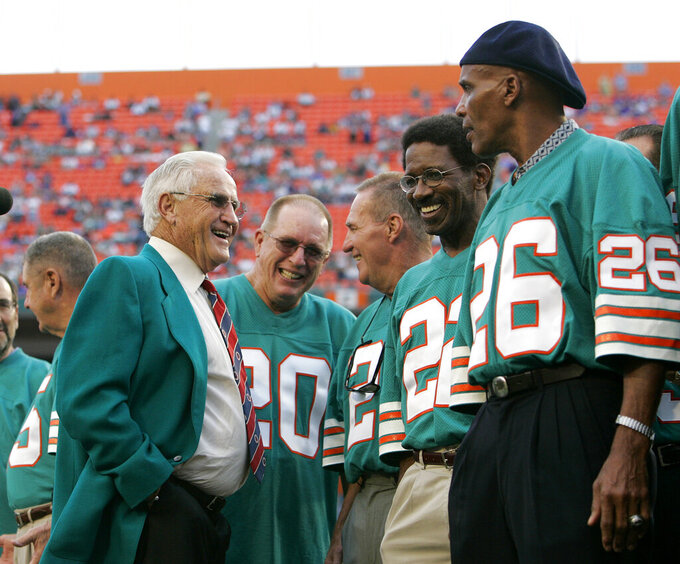 FILE - In this Dec. 16, 2007 file photo former Miami Dolphins coach Don Shula, left, talks with former players from the 1972 undefeated team during a halftime ceremony at a football game against the Baltimore Ravens at Dolphin Stadium in Miami. From left: Shula, Larry Seiple (20), Jim Kiick (21), Mercury Morris (22) and Lloyd Mumphord (26). The perfection of the 1972 Miami Dolphins has earned them the nod as the NFL’s greatest team. The 1972 Dolphins edged the 1985 Chicago Bears for the NFL’s greatest team in balloting by 59 national media members as part of the NFL’s celebration of its 100th season. (AP Photo/Lynne Sladky, file)

Break out the champagne.

The perfection of the 1972 Miami Dolphins has earned them the nod as the NFL’s greatest team.

The remaining Dolphins allegedly toast themselves and their achievement each year when the final undefeated club loses. That might be apocryphal, but if not, now they can toast each other for edging the 1985 Chicago Bears in balloting by 59 national media members as part of the NFL’s celebration of its 100th season.

“The thing I have always said when I talk about that football team is the thing that set them apart was their intelligence and their competitiveness,” their coach, Don Shula, once said. “They wanted to win and they were very smart. We were the least-penalized team in the league. We never beat ourselves.”

The Dolphins went 14-0 during the regular season, only three games decided by one score. After edging Cleveland in a surprisingly close opening-round playoff game, they beat Pittsburgh — fresh off the Immaculate Reception victory over Oakland — to take the AFC championship. And Miami beat Washington in the Super Bowl.

The total margin of victory for those three postseason games was 17 points.

No matter. Perfection was achieved, has not been matched, and thus, those Dolphins of Shula, the No-Name Defense and the backfield trio of Larry Csonka, Jim Kiick and Mercury Morris, are No. 1 all time.

In 2013, President Barack Obama honored the ‘72 Dolphins. Two years before, he had done the same for the ’85 Bears, calling them the greatest team ever.

"I mean, take it with a grain of salt," Obama told the Dolphins, to laughter.

Shula, then in a wheelchair, gave Obama a jersey with the number 72 and "undefeated" on it.

While those Dolphins boasted eight future Hall of Famers in Shula, front office executive Bobby Beathard, Csonka, Bob Griese, Paul Warfield, Larry Little, Jim Langer and Nick Buoniconti, one of the saviors of their perfect season was a 38-year-old journeyman quarterback named Earl Morrall. When Griese went down with a broken leg and dislocated ankle injury in Week 5, Morrall — the 1968 NFL MVP when he stepped in for an injured John Unitas — took over. Miami didn’t miss a beat, mainly because of the powerhouse running game behind an elite offensive line.

But Morrall was a key cog.

"When Bob went down, Earl stepped in like nothing happened, and we just won all the games," Shula said. "Then Griese was healthy for the AFC championship game against Pittsburgh, and I put Bob in the second half and he helped us come from behind and win the game.

"Then I had a decision to make, which to me has always been the toughest decision I've ever had to make: who to start in the Super Bowl. Earl had done such a great job to get me there, but Bob was my quarterback going into the season, and he was my quarterback of the future. So I figured as long as Bob was healthy and ready to go, I was going back to Bob.

"So I've always said Unitas, Griese and Dan Marino are in the Hall of Fame, and Earl is in my own personal Hall of Fame."

So, likely, is Garo Yepremian, whose late attempted pass on a botched field goal — ever see a placekicker try a pass under pressure? This one was laughably memorable — in the Super Bowl turned a romp into a 14-7 score that held.

Coincidentally, the 1985 Bears, who also won the Super Bowl, went 15-1. The only defeat was at Miami.

Only the 2007 Patriots truly challenged the Dolphins’ accomplishment, and they lost to the New York Giants in the Super Bowl after 16 regular-season wins. A perfect season has become practically an impossible goal in the NFL.

“We probably didn't realize how unique it was for eight to 10 years after we did it,” Csonka once said. “Then it became something that we really valued even more than when we actually accomplished it.”