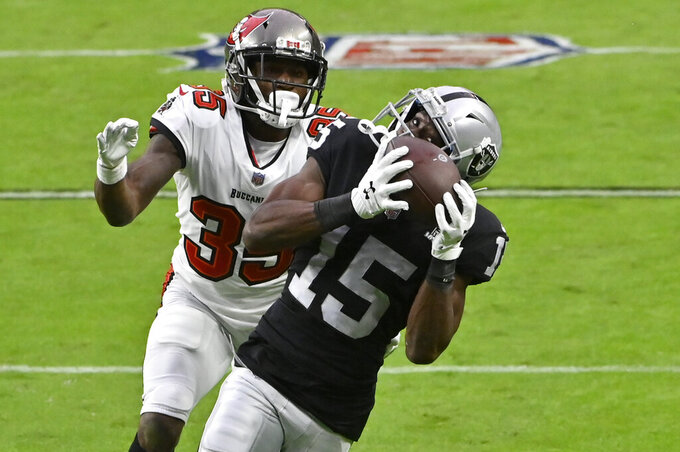 LAS VEGAS (AP) — After watching Tom Brady carve up his defense while barely being touched, Las Vegas coach Jon Gruden said he would immediately look at how to spark the Raiders struggling pass rush.

Whatever changes the Raiders do make, it doesn’t appear as if changes on the coaching staff or a trade for a difference-maker are under consideration.

“There’s a lot of people talking about are we making changes, are we going to bring in new coaches, new players. We are where we are,” Gruden said Monday. “We’re going to stick together, bond together. We’re going to make some changes in the lineup possibly and in the scheme that we use. We’re hoping we change the results that we’re getting.”

Gruden talked about the possibility of using different rotations, moving players from inside to outside and tinkering with the blitz and stunt packages.

He hopes that will help generate more pressure after the Raiders had just one quarterback hit against Brady in a 45-20 loss Sunday. Las Vegas’ seven sacks on the season are tied for the third fewest in the NFL.

Second-year end Maxx Crosby has four of those sacks, but hasn’t gotten much help outside a breakthrough performance two weeks ago against Kansas City when the Raiders generated a season-high 24 pressures and three sacks against Patrick Mahomes.

Clelin Ferrell, the fourth overall pick in 2019, has no sacks in 150 snaps this season against the pass. Arden Key, a third-rounder in 2018, and key offseason addition Maliek Collins also have no sacks despite each playing more than 120 snaps against the pass.

The lack of pressure has contributed to a defense that ranks second worst in points allowed (32.8 per game) and third worst in yards per play allowed (6.29).

Carr’s scrambles. Derek Carr converted two first downs with good scrambles, gaining 10 yards on a second-and-10 in the second quarter and 9 yards on third-and-7 in the third quarter. Carr has rushed for seven first downs already this season, tied for the most he’s had since getting 10 as a rookie in 2014.

Running game. The offensive line was hampered after four starters missed most of the practice week because they had “high risk” contact with right tackle Trent Brown before he tested positive for COVID-19. They returned Sunday morning but struggled to create holes for Josh Jacobs, who was held to 17 yards on 10 carries. That’s the worst rushing average for a Raiders player with at least 10 attempts since 2015. Jacobs has struggled to get going this season with his 3.4 yards per carry ranking 44th of 46 qualified rushers.

Nelson Agholor. Agholor had five catches for 107 yards for his fourth career 100-yard game. He has a TD in three straight games and has built a good rapport with Carr. Agholor has caught 15 of 20 passes thrown his direction for 292 yards and four TDs.

Henry Ruggs III. After his two deep catches sparked the offense in the win at Kansas City before the bye, Ruggs was mostly an afterthought against the Bucs. He was targeted just three times and had two catches for 35 yards.

OL Sam Young left the game with a knee injury. ... G Richie Incognito is making progress in his rehab from an Achilles injury and is close to making a return. ... Brown has reported feeling well but Gruden didn’t know when he would be able to rejoin the team. ... S Johnathan Abram was taken off the COVID-19 list after passing five days of tests from his last contact with Brown.

309. The Raiders have been outscored by 309 points since Gruden returned as coach in 2018, tied with the Jets for the worst point differential in the NFL in that span.

The Raiders travel to Cleveland to face the Browns on Sunday.