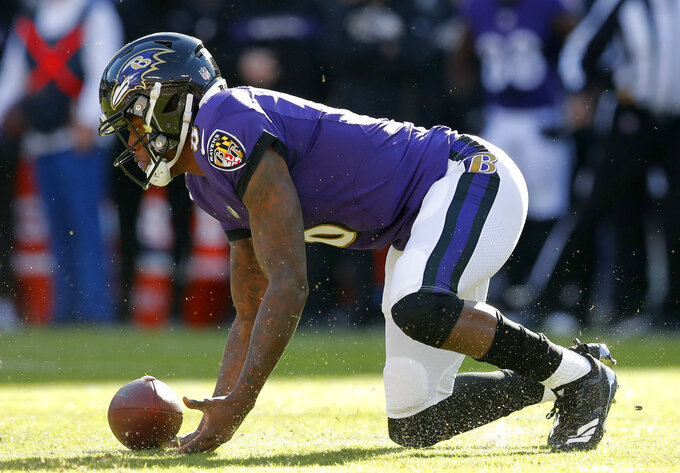 Baltimore Ravens quarterback Lamar Jackson recovers a fumble that he made in the first half of an NFL wild card playoff football game against the Los Angeles Chargers, Sunday, Jan. 6, 2019, in Baltimore. (AP Photo/Carolyn Kaster)

BALTIMORE (AP) — Lamar Jackson's passer rating was bottoming out at 0.0, he'd endured a first half with a combined total of fumbles and interceptions (three) that was higher than his number of completions (two), and his playoff debut was shaping up as, in a word, a disaster.

So as Baltimore Ravens coach John Harbaugh stuck with his rookie quarterback, and the team's deficit in an AFC wild-card game against the Los Angeles Chargers grew and grew Sunday, fans near the home team's sideline called for Super Bowl MVP Joe Flacco to get a chance.

That drew the ire of Ravens cornerback Jimmy Smith, who let the spectators know he thought they were making a mistake during what would become Baltimore's 23-17 loss to LA.

"I'm standing there, and they were just like chanting Flacco's name. I love 'Flac,' but (Jackson) got us here. So for the fact that you're a fair-weather fan that quickly when things go rough — you turn your back on him? — that just got under my skin a little bit," Smith said. "So I just went to them and told them, like, 'Yo, you either ride or die or you get ... out of here.'"

A day before his 22nd birthday, Jackson became the youngest quarterback to start a postseason game, and aside from getting in gear late, he sure looked like someone not quite ready for the big stage. The Heisman Trophy winner from Louisville went 14 for 29 for 194 yards, two fourth-quarter TDs to make the score respectable, one pick, one lost fumble and two more fumbles recovered by Baltimore. He was sacked seven times.

Asked about the fans' jeering, Jackson said: "No hard feelings. They're looking for better."

Harbaugh said he considered making a switch to Flacco — "It was part of the conversation. Certainly thought about it. Certainly talked about it," the coach explained — but thought the fact that Jackson produced a pair of scores late proved that keeping him in the game was the right call.

"Lamar's our quarterback going forward. There's no question about that," Harbaugh said, adding that he expects to return next season, too.

While the Chargers (13-4) advanced to play the New England Patriots next Sunday, the AFC North champion Ravens (10-7) had their first trip to the playoffs since 2014 end quickly.

Jackson led them there since replacing Flacco by going 6-1, thanks to a strong running game and the league's No. 2 scoring defense. The sprint to a division title included a 22-10 victory at the Chargers two weeks ago. Rather than a harbinger, that game seemingly provided a scouting report for LA, the first club to face Jackson twice.

In that regular-season win against the Chargers, Jackson threw for a career-high 204 yards and put up a 101.3 rating that was his best in an NFL start.

It was clear from the outset Sunday this was not going to go as well. The Ravens fumbled on three of their first eight plays, two by Jackson and one by Kenneth Dixon. At halftime, Jackson was 2 for 8 for 17 yards passing. The Ravens had 69 total yards and a paltry three first downs.

Baltimore finally scored in the third quarter via Justin Tucker's 33-yard field goal after a 6-yard "drive" — that's how far Jackson took the Ravens after C.J. Mosley's fumble return. There were boos from the crowd of 70,432 after Jackson was stuffed for no gain on third down.

That kick cut Baltimore's deficit to 12-3. After a partial block resulted in an 11-yard punt that gave the Ravens the ball at the LA 40, another get-nowhere possession led to a field-goal attempt by Tucker, this one from 50 yards — and the most accurate kicker in NFL history produced his first postseason miss in 10 tries.

The next Ravens drive featured a pair of sacks — and more boos. Flacco remained on the sideline, standing, his helmet on. After the Ravens trailed 23-3, Jackson tossed TD passes to Michael Crabtree from 31 yards with 6½ minutes remaining, and from 7 yards just before the two-minute warning.

"I wasn't playing my game today," Jackson said. "Only toward the end."

With one last possession in the closing minute, Jackson lost yet another fumble, sealing the outcome.

"He fought to the end. Gave us a chance at the end," Smith said about his teammate. "Came up short. But you see the heart he has."