Reaction to the death of Hall of Fame coach Don Shula 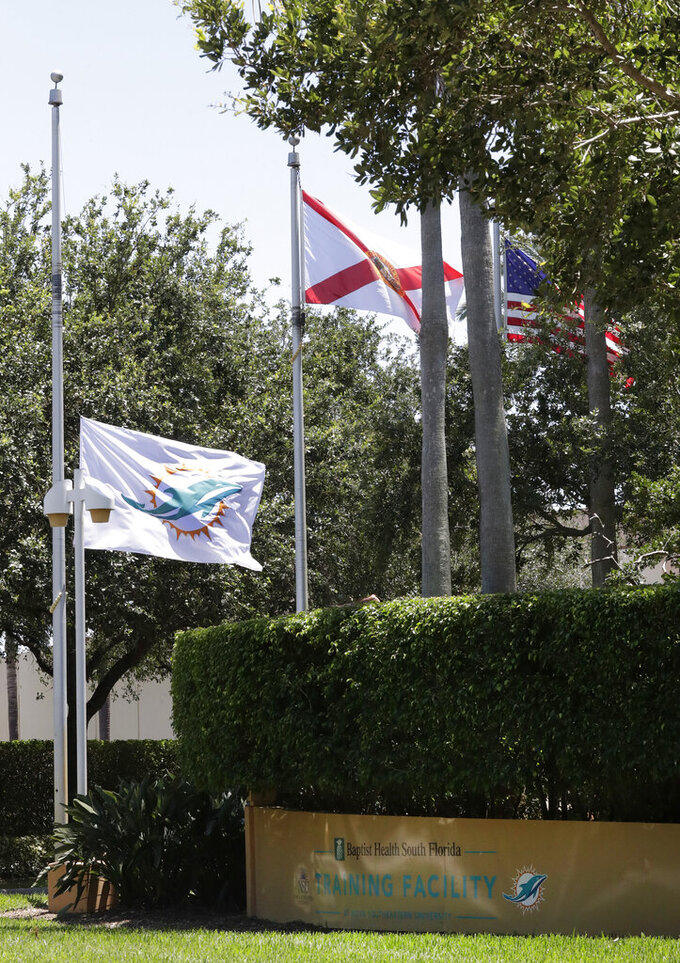 The Miami Dolphins team flag flies at half mast outside the NFL football team's training camp facility, Monday, May 4, 2020, in Davie, Fla. Former Dolphins coach and Hall of Famer Don Shula died Monday at his home in Indian Creek, Fla. He was 90. (AP Photo/Wilfredo Lee)

Reaction from the NFL world to the death Monday of Pro Football Hall of Fame coach Don Shula:

“Coach Shula — you will truly be missed! You embody the definition of 'greatness.' You brought that winning attitude with you every day and made everyone around you better.” — former Dolphins quarterback Dan Marino in a tweet.

“The guy had me fooled. He was such a strong personality and figure, you take for granted he's always going to be there. I just assumed in 10 years we’d be celebrating his 100th birthday if the rest of us were lucky enough to live that long.” — former Dolphins fullback Larry Csonka.

“He was a source of inspiration to me every time I was around him.” — Dolphins owner Stephen Ross in a statement.

“He was an inspiration to us all for his faith and love of family and community. He is remembered as a great leader who shaped many lives by his example. He left us still undefeated!” — the Shula family in a statement.

“We lost someone who cannot be replaced, who cannot be equaled, and who personified everything that is right not only about our sport, but about the way we all should conduct ourselves.” — former Dolphins quarterback Bob Griese in a statement.

“Don was not just an iconic figure in the history of our game. He was an American institution who always represented the highest levels of character, leadership and integrity. Being in his presence was always a special opportunity to rub shoulders with true greatness.” — Dallas Cowboys owner Jerry Jones in a statement.

“Coach Shula is on the Mount Rushmore of NFL head coaches, and his coaching career impacted so many people on and off the field.” — Pittsburgh Steelers president Art Rooney II in a statement.

“Any time I got to spend with him was always the best part of my day.” — former Dolphins coach Adam Gase, now coach of the New York Jets.

“Don Shula is a legend who had an incredible impact on the game of football. He was an innovator who competed for championships over several eras of professional football.” — Dolphins coach Brian Flores in a statement.

“Coach Shula was a man who truly loved the game, and I have often been moved by the deep respect and affection he was always afforded by the men who played for him.” — Pro Football Hall of Fame president David Baker in a statement.

“Coach Shula and the Shula family have been part of our lives for over 62 years. The memories we created together, including our Miami Dolphins Super Bowl championships and the 1972 undefeated season, are some of life’s greatest moments.” — former Dolphins offensive coordinator Howard Schnellenberger and his wife, Beverlee, in a statement.

“Don Shula was so much more than just the greatest coach in NFL history. More importantly, he possessed so many qualities that only the very best among us attain: unparalleled leadership, dignity, class, honesty and integrity.” — Tim Robbie, former Dolphins president and son of team co-founder Joe Robbie, in a statement.

“Coach Shula was the rare man who exemplified true greatness in every aspect of his life. He will be so missed by so many, but his legacy of character and excellence will endure.” — Dolphins president Tom Garfinkel in a statement.