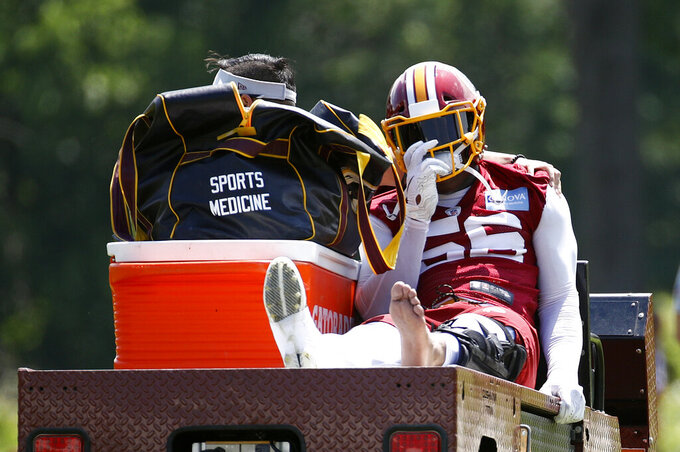 Washington Redskins linebacker Reuben Foster rides a cart off the field after suffering an injury during a practice at the team's NFL football practice facility, Monday, May 20, 2019, in Ashburn, Va. (AP Photo/Patrick Semansky)

ASHBURN, Va. (AP) — Washington Redskins linebacker Reuben Foster appeared to injure his left knee during his first snap at an offseason practice Monday and was taken off the field on a cart.

Foster stepped on one of offensive lineman Tyler Catalina's feet, his left leg landed wrong and he went down in obvious pain. His left leg was stabilized before he was carted off, and while the team awaits an MRI and other tests, it didn't look good.

"We'll hope for the best right now until we get the results, but very concerning, for sure," coach Jay Gruden said after the first day of organized team activities. "I'll just have to wait and see before I get too emotional about it."

Washington claimed Foster off waivers from the San Francisco 49ers after a domestic violence arrest in Tampa, Florida, in November. Prosecutors there decided in January not to pursue a case against the 25-year-old, dismissing the first-degree misdemeanor battery charge. The NFL fined Foster two game checks for the upcoming season but did not suspend him.

All eyes were supposed to be on first-round pick Dwayne Haskins and trade acquisition Case Keenum opening up their quarterback competition that will continue into training camp. Haskins impressed, but Foster going down was another blow to the Redskins, who put an NFL-high 27 players on season-ending injured reserve in 2018 and have invested heavily in trying to limit preventable injuries.

This one on the third play of a practice in May at three-quarters jogging speed was another unpredictable accident.

"We've had some bad luck over here for the last couple years, but this one here takes the cake because this was a noncontact drill and there was really no contact involved in it," Gruden said. "Sometimes I wish we'd do just all walkthroughs and then go play on Sundays, but we've got to practice."

Foster, a 2017 first-round pick of the 49ers, is one of eight former Alabama players on the roster. Those former college teammates had to watch Foster writhing in pain on the practice field more than three months before the season starts.

"It's tough, man," ex-Alabama linebacker Shaun Dion Hamilton said. "All of us are going to be behind him no matter what the circumstances are."

Foster was expected to compete for a starting inside linebacker job this season. That could be in jeopardy if this injury is as severe as it looked and could mean Hamilton and Mason Foster opening as the starters.

"It's part of football, so you've just got to keep dealing with it and keep moving forward," Mason Foster said. "Guys are ready. Guys have been working hard and just going to continue to work. It's tough, but just got to play through it and keep working."

NOTES: Gruden said the team is waiting to see if the league hands down any discipline to safety Montae Nicholson, who was arrested for his role in an altercation in December and had the charges dismissed last week.