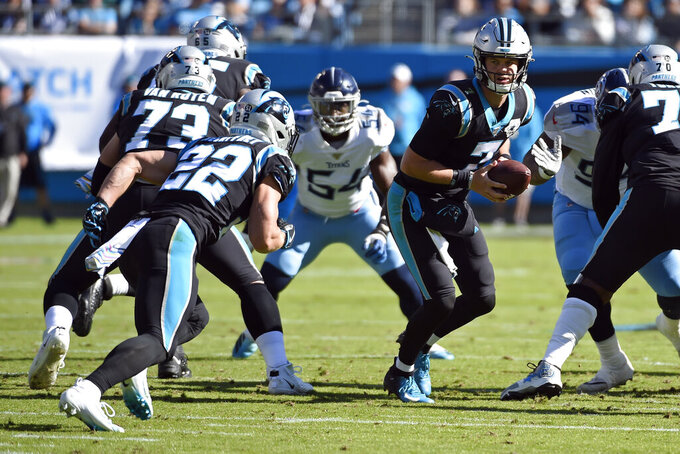 Carolina Panthers quarterback Kyle Allen (7) looks to hand off to running back Christian McCaffrey (22) during the first half of an NFL football game against the Tennessee Titans in Charlotte, N.C., Sunday, Nov. 3, 2019. (AP Photo/Mike McCarn)

GREEN BAY, Wis. (AP) — Aaron Rodgers couldn't quite put his finger on it, but the two-time MVP knew something was missing last Sunday.

Rodgers was sacked three times, and the Green Bay Packers' offense had its most anemic performance under coach Matt LaFleur in a 26-11 loss to the Los Angeles Chargers.

"It was such a different feeling," said Rodgers, who was held to a career-low 61 yards through the first three quarters. "We just didn't have that normal juice. ... I'm not calling anybody specifically out, I'm just saying there was obviously something that threw us off a little bit energetically."

Green Bay (7-2) will look to bounce back Sunday when it hosts the Carolina Panthers (5-3), a team the Packers have scored 30-plus points against in five of the six games they've played at Lambeau Field.

Rodgers will have his top target, Davante Adams, for the second straight game. The two-time Pro Bowl receiver continues to work his way back to full strength after missing four games with turf toe.

"They've been able to move the ball since I've been out, so the focus shouldn't change on how we're trying to do things," said Adams, who had a team-high seven catches for 41 yards against the Chargers. "Obviously, me being a big part of the offense, I'm going to get my looks here and there and I'm going to do what I can with that and make the biggest impact I can for the team. It's not about me being back, so nothing should change as far as how we're trying to beat teams. It's not going to be some crazy air attack and have 15 targets every game."

Carolina is Kyle Allen's team now that Cam Newton has been placed on injured reserve with a nagging foot injury. The former undrafted rookie has done an admirable job in Newton's absence, going 5-1 as a starter. With Newton out for the rest of the regular season, Allen doesn't have the pressure of wondering when he will be replaced. Panthers coach Ron Rivera said that might be good for the second-year quarterback.

"I do think as a player it will help him," Rivera said. "It's one of those things where you don't have to worry, 'Hey, if I don't play well back-to-back, something is going to happen immediately.'"

Christian McCaffrey is playing like an MVP candidate, leading the league in yards from scrimmage (1,244), touchdowns (13) and a number of other categories. McCaffrey has been finding the end zone with great frequency of late, with nine scores in the last four games.

McCaffrey is a nightmare of a matchup for a Packers' leaky run defense that has allowed the third-most rushing yards (1,036), second-most touchdowns (10) and fifth-most receptions to the running back position this season. After nine games, Green Bay is allowing the ninth-most rushing yards per game and eighth-highest per carry average.

McCaffrey had 136 total yards and caught a touchdown pass when the Panthers defeated the Packers two seasons ago.

Green Bay will get some help defensively on Sunday. The Packers activated safety Ibraheim Campbell from the reserve/physically unable to perform list. Campbell played in three games for Green Bay last season, including one start, and had 18 tackles (15 solo) and a forced fumble in 112 defensive snaps.

"I've been preparing as well as I possibly could up to this point. so I fully anticipate going out there and playing well," Campbell said. "This is the opportunity I've been waiting for, so I plan on taking advantage of it."

It's worth keeping an eye on Panthers cornerback James Bradberry and whether a groin injury is enough to keep him out Sunday or affect his high level of play. Bradberry has earned a reputation as one of the game's best cover men and is having an All-Pro type season. If he doesn't play against Rodgers, it would be a huge blow for the Panthers' defense. Veteran Ross Cockrell would fill in.

On the flip side, the Panthers are expected to get defensive end Mario Addison (6½ sacks) back this week after he missed last Sunday's game following the fatal shooting of his brother.

"I think for me, I think the best thing for him is to get back to work, get around the guys and try to keep your mind off it as best you can," outside linebacker Bruce Irvin said. "I'm sure he goes home (and) he thinks about it. But the six or seven hours he's here, we are trying to be around him, talk as much football as we can and try to get his mind off it."

Carolina leads the NFL in sacks with 34.