Steelers' season ends in heavy rain and with sea of mistakes 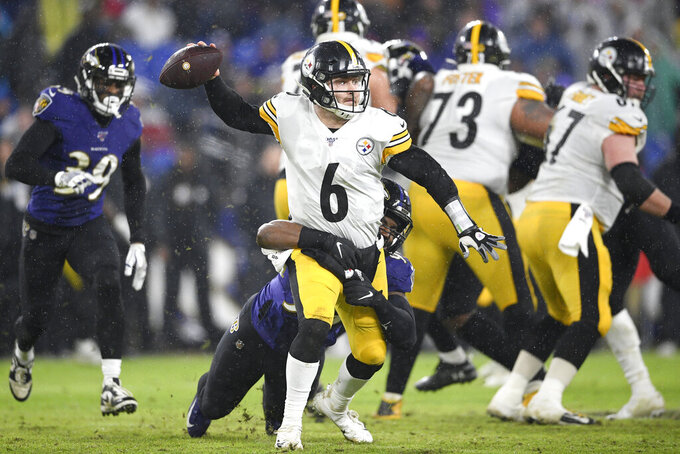 Pittsburgh Steelers quarterback Devlin Hodges (6) tries to make a throw as Baltimore Ravens outside linebacker Matt Judon grabs him during the second half of an NFL football game, Sunday, Dec. 29, 2019, in Baltimore. The Ravens won 28-10. (AP Photo/Nick Wass)

BALTIMORE (AP) — How appropriate that the Pittsburgh Steelers' season ended on a soggy, ugly Sunday when they couldn’t move the ball or stop the Baltimore Ravens on offense.

Even if they beat the Ravens, the Steelers weren't going to the postseason. Tennessee's win over Houston finalized that outcome. But to conclude the season with a 28-10 loss to a team that rested seven starters was pretty tough to take.

“We didn't finish the way we wanted to finish,” safety Minkah Fitzpatrick said. “There were a lot of things we could have done better.”

Before the Steelers (8-8) get around to doling out the blame for their shortcomings, they will first look in the mirror introspectively to determine exactly what went wrong during a three-game skid that cost them an invitation to the postseason party.

“Not going out and winning these last three is most definitely frustrating because we had a chance to make the playoffs,” linebacker Mark Barron said. "It hurts, but it is what it is. It’s on us. We got to point the finger back at ourselves because we just didn’t make plays.”

Sure, losing veteran quarterback Ben Roethlisberger to injury early on made it tough on Pittsburgh. The Steelers were 1-4 before using a 7-1 streak to get back into it, but the final three weeks left them on the outside looking in at the playoffs for a second year in a row.

“I'm looking forward to Ben hopefully coming back healthy,” receiver Diontae Johnson said. “So it can get back to the way it used to be.”

Coach Mike Tomlin had no interest in dissecting the season just a few minutes after it ended.

“We're not going to assess it too much to make broad statements. We will have time for that in the days that follow,” he said.

Pittsburgh struggled in almost all phases of the game. The Steelers couldn’t generate any offense and failed to contain backup running back Gus Edwards as he rolled to a career-high 130 yards. A late special teams breakdown resulted in a Baltimore touchdown.

There were paths to the postseason even if Pittsburgh lost, but depending on other teams is never a good option. Sure enough, Tennessee's win over Houston dashed the Steelers' hopes.

Having already clinched the top seed in the AFC, the Ravens rested quarterback Lamar Jackson and were without top running back Mark Ingram, who sat out with a calf injury. But Pittsburgh was unable to slow the Baltimore ground game, which rolled up 223 yards, including 50 by backup QB Robert Griffin III, who was making his first start since 2016.

“We didn’t do a good enough job today defensively at stopping the run,” Barron said. “So I’m sure there’s some mistakes being made somewhere, because when you see people having success at the run, somebody’s probably out of place.”

Aside from running back Benny Snell, who ran for 91 yards, the Steelers had trouble sustaining any offense. Their lone touchdown came in the second quarter on a 4-yard run by Snell that capped a 75-yard drive engineered by Devlin “Duck” Hodges.

“Going home in January is not fun," he said. “This is my first year, so I am sure it hits the older guys a lot different."

Asked to analyze the problem with the Steelers on offense, Hodges was succinct.

“Execution,” he said. “Got to be better. Execution. Turning the ball over. Just little things, little things in the game that will cost you.”