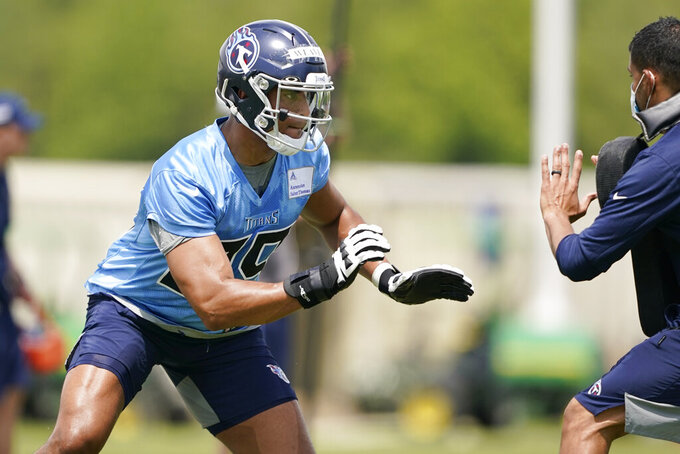 NASHVILLE, Tenn. (AP) — Top draft pick Caleb Farley is busy learning the Tennessee defensive playbook, then he heads off to rehabilitation as he recovers from surgery while his rookie teammates hit the practice field.

Patience is the order not only of the day but the weeks until training camp for the No. 22 pick overall and the Titans.

“I’m dying to get back on the football field," Farley said Saturday. "And yeah, so that’s why I’m just waking up every day and putting everything I have to invest and getting back healthy.”

Farley might have been a top-10 selection and the first cornerback drafted if not for having a second surgery in March to repair a disk doctors originally hoped would heal after surgery following his 2019 season at Virginia Tech to repair an adjacent disk.

The Titans gambled Farley will recover once and for all from the latest surgery, needing a top cornerback after they cut three starters in the secondary due to the salary cap in Malcolm Butler, Adoree Jackson and safety Kenny Vaccaro.

But they spent five of eight draft picks on defense to fix a unit that was among the NFL's worst last season and avoid being a drag on an offense led by All Pro and AP NFL Offensive Player of the Year Derrick Henry and quarterback Ryan Tannehill.

“He’s studying, he’s been conscientious, he’s answered the questions that I’ve had for him on our team meeting as it relates his assignments,” Vrabel said.

The 6-foot-2, 197-pound Farley said he's excited to be playing football again and learning the playbook. The cornerback opted out of the 2020 season, choosing not to risk his family with his mother dying in January 2018.

Farley asked for the playbook right after he was drafted and got a copy the next day.

Farley likes what he sees in the Titans' defensive schemes.

“I feel like it fits my skill set well,” Farley said. “I think that’s why they picked me because a scheme that I could fit in, and I’m just extremely excited to have this opportunity to bond with my teammates and feel like a freshman in college all over again.”

At least the Titans are holding a three-day rookie minicamp, even if their numbers are limited. The coronavirus pandemic wiped out last year's entire offseason program, and that certainly didn't help top draft pick Isaiah Wilson who Tennessee traded to Miami in March before he was cut a few days later.

Fellow cornerback Elijah Molden, the No. 100 pick overall, came out late Saturday in the one session open to reporters. Vrabel said he was limited if the Titans had been required to issue an injury report.

Outside linebacker Rashad Weaver, their second fourth-round pick, was among those getting individual coaching from Vrabel. The Titans need Weaver to back up Harold Landry III and free agent signee Bud Dupree to boost a pass rush that had just 19 sacks last season.

Weaver was charged April 30 — a day before he was drafted — with simple assault of a woman April 18. His attorney called the allegation Weaver struck the woman “completely false and reckless.”

“Everything I’ve seen from Rashad here in person has been one that’s been attentive and wants to try to be a good teammate and is taking coaching," Vrabel said. "We understand the severity of the accusations. We take them very seriously, but we’re also going to allow the legal process to play its part and run its course.”