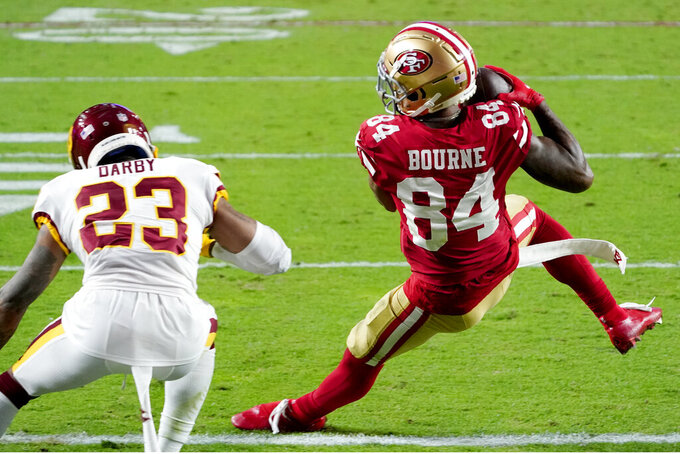 Rookies Chase Young and Kamren Curl scored defensive touchdowns as Washington grabbed sole possession of first place in the division after a gritty 23-15 win over the San Francisco 49ers.

Washington started the season with a 2-7 record but now the playoffs are a very real possibility, even with quarterback Alex Smith's availability in question. He missed the second half with soreness in his surgically repaired right leg.

“We’re trying to talk about where we’re headed, not where we’ve been,” Washington coach Ron Rivera said. “That’s one of the big things in the message I’m hoping to get across. As we go forward as a football team, we’re going to be a different team.”

Washington's first four-game winning streak since 2016 puts it one game ahead of the New York Giants, who lost to the Arizona Cardinals 26-7 earlier Sunday.

Washington (6-7) took a 13-7 lead at halftime after Young scooped up a fumble, shook off a tackle and ran 47 yards down the left sideline for a touchdown with 1:11 left in the second quarter.

"I’m at a loss for words," Young said. “I was out there playing ball and good things happened for me today.”

Even at 264 pounds, the No. 2 overall pick easily outran the San Francisco offense into the end zone, palming the football in his left hand as he cruised past the pylon. After the stellar performance, Young brought his phone into the postgame interview and his mom was still on the line.

Her assessment of Young's touchdown: “He got it and kept truckin’!”

Added Young: “I was gassed. That’s why I was holding it like a loaf of bread.”

Curl delivered Washington's next huge moment on the final play of the third quarter. He snagged a pass from Nick Mullens and ran 76 yards the other way for a 23-7 advantage. Curl was the team's seventh-round pick this year.

Washington is the first team to get defensive touchdowns from two rookies in the same game since the Rams against the Texans in 2013.

The game was in Arizona because of coronavirus restrictions in the 49ers' home county of Santa Clara. The 49ers (5-8) have lost five of their past six games.

They pulled within 23-15 on a 6-yard pass from Mullens to Kyle Juszczyk and a 2-point conversion with 10:18 left. San Francisco had four more offensive possessions but never seriously threatened. The 49ers were hurt by three turnovers.

“We were not clean today offensively,” San Francisco 49ers coach Kyle Shanahan said. “Regardless, we would have found a way to win if we didn’t turn the ball over. ... You can’t expect to win many games when you play like that.”

Washington won without scoring a touchdown in a road game for the first time since 1992.

Dwayne Haskins, the 15th overall pick in the 2019 draft, replaced Smith in the second half. The 23-year-old was the team's starter at the beginning of the season but benched after four games.

Haskins wasn't particularly good, but didn't have to be, completing 7 of 12 passes for 51 yards. He kept Washington out of trouble and said he was “grateful to get out on that grass again” after losing his spot in October.

San Francisco couldn't get much going after taking a 7-0 lead. Mullens completed 25 of 45 passes for 260 yards, one touchdown and one interception. Brandon Aiyuk caught 10 passes for 119 yards.

Washington won despite losing Smith because of problems with his right leg, which he broke in two places in November 2018. The injury required multiple surgeries and sidelined him for nearly two calendar years.

The 36-year-old Smith was 8 for 19 for 57 yards and an interception in the first half but walked to the locker room in the final minute of the second quarter.

Rivera said postgame that Smith's X-rays came out fine and that the quarterback was available in an emergency situation. He said that Smith was experiencing “some tightness and muscle soreness as he was pushing off that right leg.”

San Francisco: travels to the Dallas Cowboys next Sunday.