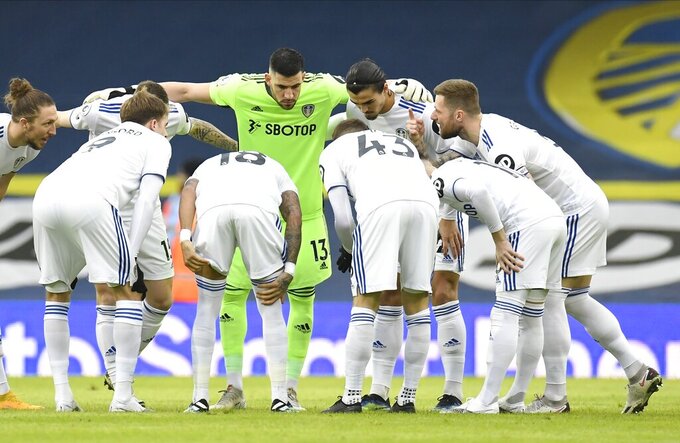 The San Francisco 49ers will take a greater role in the running of English Premier League club Leeds after raising their stake to 37% on Monday.

Paraag Marathe, the president of 49ers Enterprises, will become vice chairman of the northern English club under Andrea Radrizzani, who remains the majority owner.

The 49ers first bought 15% of the team from Radrizzani in 2018 and the club has since secured promotion back to the Premier League after a 16-year absence — making increased investment from the NFL franchise more desirable.

“Our investment two-and-a-half years ago was to dip our toes in the water," Marathe told The Associated Press. "We really felt like Leeds had the bones of a powerful big global club and just from their global fan base and the supporter base and everything that they have.

“As we’ve spent more time there we’ve realized that to be very true, and the opportunity to be very great and so it didn’t take us very long to realize we wanted to be involved in a much deeper way.”

Leeds has won admirers with its style of football under Marcelo Bielsa, who has guided the team to 12th in the 20-team standings halfway through the season.

“We want to be competitive and not just a flash in the pan competitive, but we want to be sustainably competitive,” Marathe said from San Francisco. "This is really about a deeper engagement. And not just me, but all of us at the 49ers, deploying our resources and expertise and blueprints for success over to Leeds and enable that club (to) really transform itself as well.”

“We’re one big family now and it’s really about … and we’ve gone through a transformation at the 49ers over the last decade, decade and a half, and we feel like Leeds, LUFC is in the nascent stages of exactly that,” Marathe said.

"First is showing we belong (back in the Premier League), next is competing in Europa (League) and eventually is competing in Champions League. That’s the goal. We’re just on the first step of that matriculation. But like I said, I think we’ve already shown that we belong.”