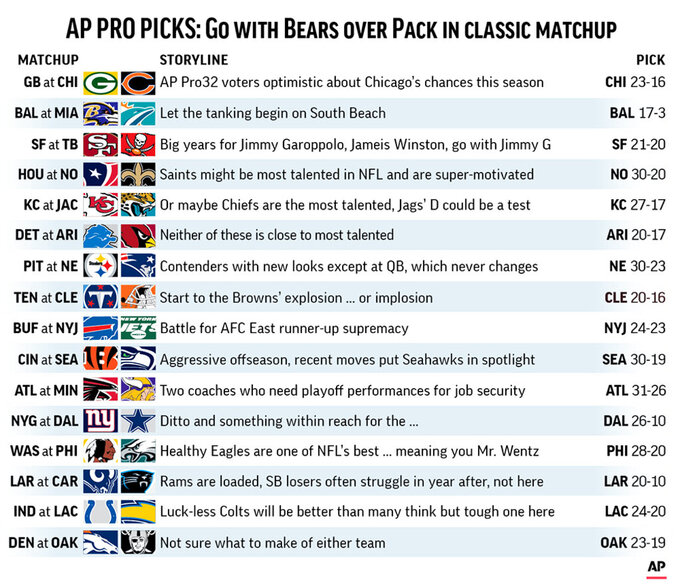 Coming off the best year of Pro Picks — yep, plus-22 against the spread if you're counting — the challenge is to repeat such wizardry in the NFL's 100th season.

It all gets started Thursday night at Soldier Field with pro football's oldest rivalry.

In emphasizing its centennial celebrations, the league chose to go with Packers at Bears rather than having the traditional matchup hosted by the Super Bowl champs. New England gets the spotlight on Sunday night instead, with Pittsburgh visiting.

AP Pro32 voters were optimistic about Chicago's chances this season, ranking the Bears No. 6 in the preseason poll released Tuesday. Green Bay, with a new coaching staff and tons of question marks, is at No. 16.

But the Packers have Aaron Rodgers, who tends to work magic against the Bears. Remember the fourth-quarter rally in their first meeting a year ago?

KNOCKOUT POOL: Two games figure to be the focus here, Baltimore at Miami and Cincinnati at Seattle. We'll go with the SEAHAWKS.

Saints might be the most talented team in NFL and have super motivation.

Or maybe Chiefs are the most talented team. Jags' D could provide a slight test.

Neither of these is close to most talented.

Two contenders with new looks — except at quarterback, which never seems to change.

The start to the Browns' explosion. Or implosion.

Seahawks' aggressive offseason and recent moves put them in spotlight.

Two coaches who need playoff performances for their job security.

Ditto. And something within reach for the ...

Eagles are one of NFL's best if they can stay healthy. That means you, Carson Wentz.

Rams are loaded, but Super Bowl losers often struggle in next year. Not here.

Luck-less Colts will be better than many think. But this is tough matchup.

Not sure what to make of either team.