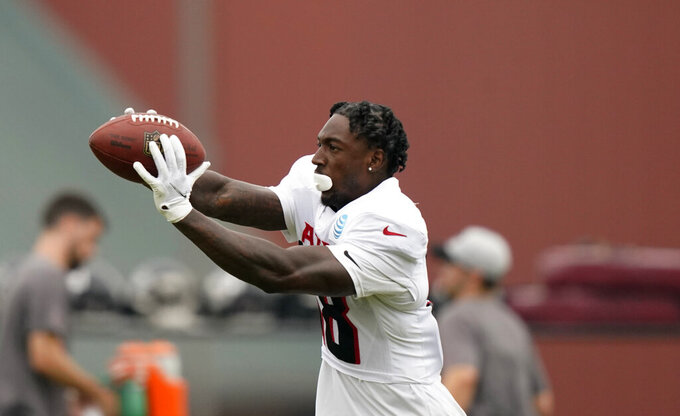 Before this year, Ridley has never been asked to lead the group for a full summer, because he's never gone through a training camp without Julio Jones, the seven-time Pro Bowl selection who holds most of the franchise's receiving records. After Jones' trade to the Tennessee Titans this summer, Ridley now has the new role.

“I don’t want to say it’s different,” Ridley said. “I had some games without Jones. ... I just can’t wait to make plays and do what I have to do for my teammates.”

Ridley already is established as the top target for quarterback Matt Ryan.

Ridley's breakout came last season, when his 90 receptions led the team as Jones was limited by injuries. Ridley tied with Green Bay's Davante Adams for fifth in the NFL with 1,374 yards receiving and tied for 10th with nine touchdowns. Jones has had only one season with as many touchdown catches.

Ridley had eight 100-yard games, including three consecutive to open the season. He also led the team with 15.3 yards per catch.

So when Ridley was asked about fans at Tuesday's practice calling out his name, he said — “Same as last year, I want to say.”

“I’ve just got to embrace it. Take it in. It feels pretty good.”

Entering his fourth season, Ridley no longer has to defer to Jones' seniority. Ridley called the receivers “my room” and seems eager to embrace the role.

Ridley's leadership will be crucial for Ryan, 36, to have success in a new scheme with first-year coach Arthur Smith.

“I think he’s entering a spot in his career where he’s definitely more comfortable,” Ryan said of Ridley.

Ryan said responsibility comes with the veteran role “and he’s cut out to do it.”

"He’s got the right mindset, right attitude, and he’s going to be a good leader for us, he really will. And I’m excited about that.”

Smith isn't as excited about Ridley being asked to measure up to the standards set by Jones.

“I just don’t believe in comparisons,” Smith said. “... It’s not fair to say hey, just because you lose player A, player B has got to be just like player A. There are a lot of ways to produce production in a passing game.”

Smith said his “long-term plan” for Ridley includes monitoring his practice as he returns from offseason foot surgery that was described as minor.

“He understands the big picture," Smith said. “Bring him along. More reps today and we’ll continue to see how he progresses.”

Ridley had his best season in 2020 but now says his foot was “not good.”

“My foot is totally, definitely fixed,” he said.

Other wide receivers competing for bigger roles this season include Olamide Zaccheaus, Tajae Sharpe, Cordarrelle Patterson, Christian Blake and rookie Frank Darby, who made an acrobatic goal-line catch for one of the top plays of Tuesday's session.

The team's top rookie, tight end Kyle Pitts, provided another highlight by leaping to catch a deflected pass despite tight coverage from cornerback Fabian Moreau. Pitts, the No. 4 overall pick in the draft, is expected to play a prominent role in the passing game.

“It is encouraging to see him make those plays that you expect him to make,” Smith said.

NOTES: Punter Sterling Hofrichter, a seventh-round draft pick in 2020 who was the team's starter as a rookie, was waived-injured. He averaged 42.5 yards in 2020 and had been competing with Dom Maggio in camp. Cameron Nizialek, the former Georgia punter who spent three weeks last season on the practice squad, was signed to compete with Maggio. ... DT Tyeler Davison missed practice and is “working through something,” Smith said. “We’re not expecting it to be anything long term.”