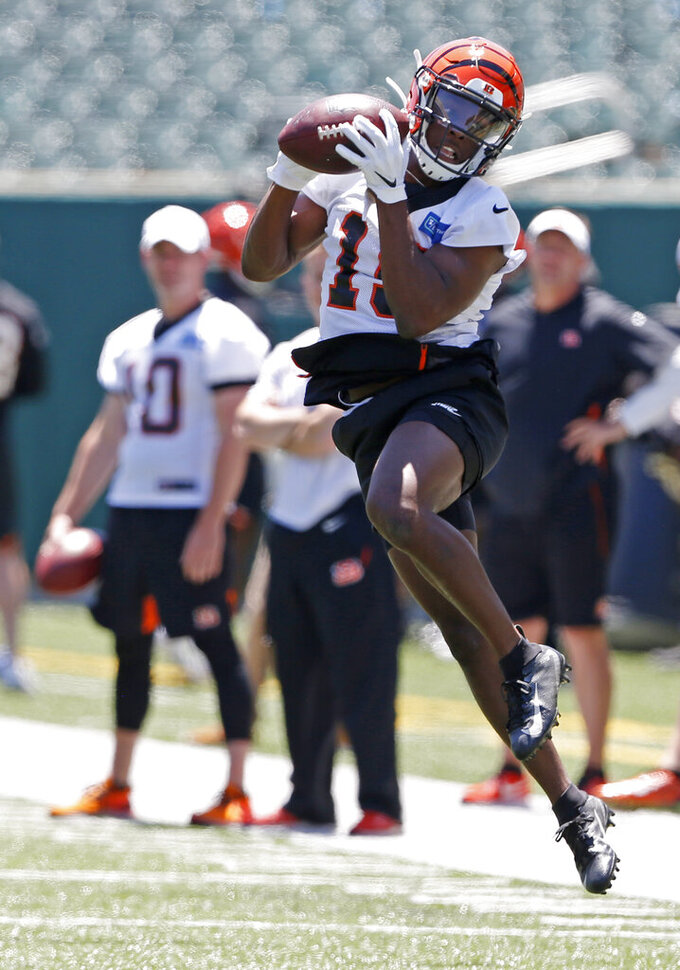 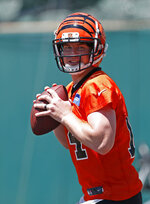 CINCINNATI (AP) — A.J. Green ran a deep route along the left sideline and caught Andy Dalton's pass in stride, a sight the Bengals desperately missed during their last-place season.

Green has fully recovered from surgery on his right big toe, the most promising development in an offseason of regrouping. He was limited in the first day of mandatory minicamp Tuesday, but only because the new coaching staff didn't want to push him too hard.

"A.J.'s been cleared to do everything," first-year coach Zac Taylor said. "But we're just going to put him out in individual (drills) and let him run around a little bit and not do any of the team stuff. I know what to expect from A.J., so it will be good just to see him catch balls from the quarterbacks. But we're not going to give him too much work."

Green missed nearly half of last season with a torn ligament in the toe . He finished with 46 catches for 694 yards — both career lows — and six touchdowns. The Bengals also lost Dalton for the last five games with a turn thumb ligament.

A last-place finish in the AFC North prompted the Bengals to fire coach Marvin Lewis and hire Taylor from the Rams . The offense finished last in the league in 2017 and near the bottom again last season.

The main focus for the offense in minicamp is learning yet another new system. Brian Callahan is the Bengals' third offensive coordinator in the last three years, a dizzying rate of change that has contributed to the poor showings.

Although Green hasn't been able to fully participate in offseason workouts, Dalton thinks their eight seasons together will compensate for the missed time.

Tight end Tyler Eifert was held out of practice as he recovers from a broken ankle that sidelined him for the last 12 games. He signed another one-year deal. Eifert has been limited to 14 games over the last three years because of injuries to his back and ankle.

Left tackle Jonah Williams wore a jersey but didn't participate in the afternoon practice. Taylor said Williams, the 11th overall pick in the draft, got "a little dinged-up" during practice last week. It's unclear how long he'll be held out of practice.

Guard John Jerry signed a day before minicamp, replacing second-year guard Rod Taylor, who was waived. Jerry has been with the Dolphins and Giants during his eight-year career, sitting out last season.

Former Bengals linebacker Brandon Johnson and cornerback Cortland Finnegan are this year's coaching interns as part of the Bill Walsh NFL Minority Coaching Fellowship program. Johnson was with the Bengals from 2008-11 and is currently the head coach at Betty Fairfax High School in suburban Phoenix. Finnegan spent 11 seasons with the Titans, Rams, Dolphins and Panthers.