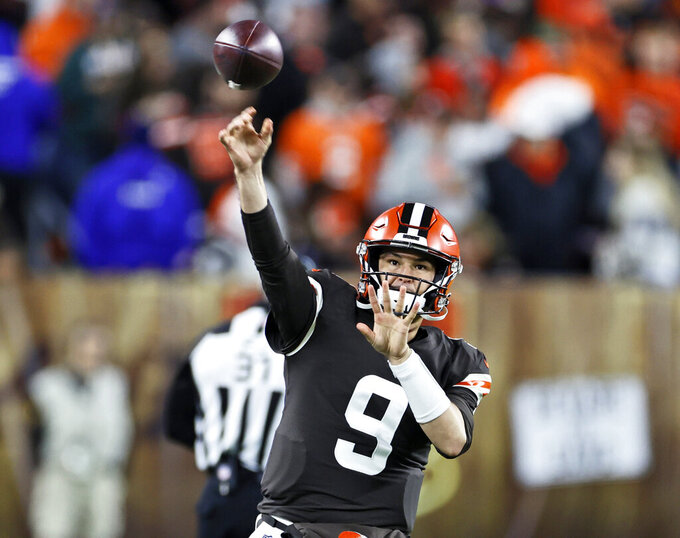 FILE - Cleveland Browns quarterback Nick Mullens throws during the first half of an NFL football game against the Denver Broncos, Oct. 21, 2021, in Cleveland. Mullens is slated to make his first start since last season for San Francisco. The Browns activated him from the practice squad Thursday, Dec. 16, 2021, presumably to be their No. 2 behind Case Keenum before the latest wave of positive COVID-19 results. (AP Photo/Ron Schwane, File)

Cleveland's veteran backup quarterback tested positive Thursday for COVID-19, possibly leaving the team without its top two quarterbacks for Saturday's game against the Las Vegas Raiders, a person familiar with the situation told The Associated Press.

Keenum was slotted to make his second start this season for Baker Mayfield, who tested positive Wednesday as the virus continues to wreak havoc with the Browns and several other NFL teams.

Third-string quarterback Nick Mullens is now positioned to start against the Raiders, but nothing is set. Mullens was signed to Cleveland's practice squad on Sept. 1 and activated from the practice squad Thursday as a COVID-19 replacement.

Keenum's positive result came after he practiced on Thursday. The team is also placing safety Ronnie Harrison, linebackers Grant Delpit and Jacob Phillips and cornerback A,J. Green on its swollen COVID-19 list, said the person who spoke on condition of anonymity because the situation remains fluid.

The roster moves aren't officially done, but once they are, the Browns will have 21 players on the COVID list. And coach Kevin Stefanski is also currently sidelined after his second positive test in two seasons.

Despite Cleveland’s widespread outbreak, a league spokesman said there has been “no change” for Saturday’s game as the Browns (7-6) and Raiders (6-7) try to improve their chances of making the playoffs.

Shortly after Keenum’s positive test was confirmed, Mayfield went on Twitter to criticize the league, which earlier relaxed testing requirements to potentially have vaccinated personnel return earlier than under the previous protocols.

Under the modified protocols, it's possible some asymptomatic Browns players could play Saturday. But there's also a chance others could test positive.

The Browns have until 4 p.m. Friday to activate players in time for them to be eligible.

The Browns did get back tight end David Njoku after he missed last week's game following a positive test. Njoku's return at least gives the Browns a playmaker for whoever plays quarterback.

The Browns held their first practice of the week on Thursday — Stefanski observed virtually — after having only virtual meetings and walk-throughs the previous two days.

Stefanski, who said earlier this week he's received his COVID-19 booster, didn’t rule out anyone for this week's game, including Mayfield, who could still meet the league's new criteria in time to play Saturday.

“Certainly when they tell me we have run out of days in terms of negative tests and those type of things, then it will be official, but I don’t know that we’re ruling any of those guys out just yet,” Stefanski said.

However, if Mayfield and Keenum can't go, Mullens will make his first start since last season for San Francisco. The 49ers went 2-6 in games the 26-year-old Mullens started. He has a 5-11 career record.

Garrett said it was unusual players weren't tested before entering the team's facility on Thursday, meaning positive players may have entered the building and increased the potential for spread.

“It almost seemed like we were just ignoring it instead of addressing the issue,” he said. "We should go ahead and test and then allow in the building but not before you get results, and that is how it should be.

"The lack of testing that we have done all year I kind of feel like has led to this point. Only testing one time a week and guys doing their own thing on Monday and Tuesday with their time off, it was kind of a recipe for disaster.”