Aqib Talib is cornerstone of Rams' efforts to rein in Saints 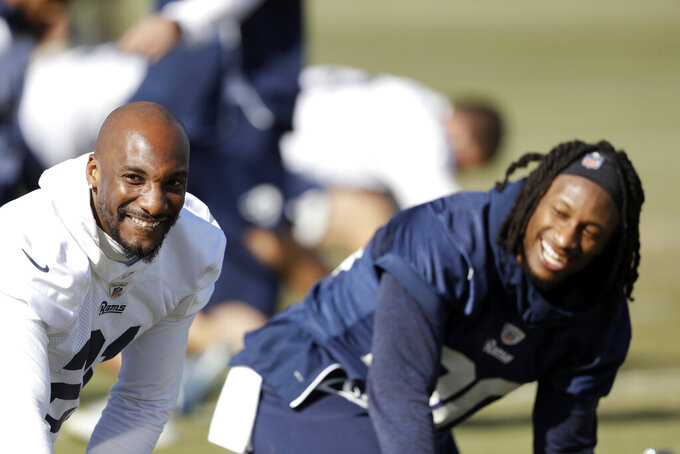 THOUSAND OAKS, Calif. (AP) — The Los Angeles Rams realize they're heading into one of the NFL's most intimidating environments when they visit the top-seeded New Orleans Saints in the deafening Superdome for the NFC championship game.

Leave it to Aqib Talib, their voluble veteran cornerback, to remind his teammates about the upside of the New Orleans fans' famed investment in the game.

"As a defense, man, we like playing in it," Talib said. "It's going to be quiet (when the Saints have the ball). We can talk. We can communicate good, so as a defense, we enjoy it."

That's exactly the type of vocal, clever leadership the Rams desired when they acquired Talib last spring to bolster a defense lacking in big-game experience. They'll need every bit of Talib's expertise and skill when they attempt to slow Drew Brees, Michael Thomas and a New Orleans (14-3) offense that already carved up the Rams (14-3) once this season.

The Rams have one significant reason to think the rematch will be better: Talib was out with an ankle injury two months ago when the Rams gave up 346 yards passing to Brees during their first loss of the season, 45-35 at the Superdome.

Talib is healthy and eager to make a difference Sunday, although he deflects any attempt to put the spotlight on him.

"Everybody is preparing for this game different," Talib said. "This is a huge game, so everybody is having real sharp meetings, and we're all going to bring something a little different to the table."

The Rams acquired Talib and Marcus Peters to be the shutdown cornerbacks needed in the schemes of defensive coordinator Wade Phillips, who also coached Talib with the Broncos. Los Angeles even gave up linebacker Alec Ogletree, their leading tackler for most of his career, to create the cap space necessary to get Talib in a trade.

While many of his teammates got their first career playoff victory last week against Dallas, Talib has seen it all before — from big playoff games in New England to a Super Bowl championship run with Denver. The 32-year-old cover specialist was named a captain by his teammates before he had even played his first game with the Rams, although he downplays his own leadership role.

"I just be myself, you know," Talib said. "I just communicate with guys, ask questions in the meeting room, and I don't know. Maybe if I was on the outside looking in, I would see it."

Los Angeles' defense has experienced a clear upswing in performance since the Rams' epic 54-51 victory over Kansas City in late November. The Rams' defense forced five turnovers by the Chiefs, but also gave up 546 yards.

That was the eighth game missed by Talib due to a high ankle sprain. He returned for the next outing after their bye week in early December — and not coincidentally, the Rams have held four of their last six opponents under 23 points.

"It changes things," Phillips said. "Since Aqib has been back, we haven't given up a lot of big plays in the passing game. He helps with communication, he helps with his talent, and we don't have to change people around to cover up for a guy that hadn't been playing. It gives us a versatility that we didn't have when he wasn't in there."

Phillips typically doesn't like to assign one cornerback to a single receiver, preferring versatility and flexibility. The Rams also have a strong third cornerback, Nickell Robey-Coleman, who typically handles receivers lining up in the slot, as Thomas sometimes does.

But it seems highly likely the Rams would consider matching up Talib with Thomas as much as possible. After all, Thomas posted 211 yards receiving against his hometown team in November largely against Peters .

Talib understandably wouldn't give away the Rams' potential strategy for the NFC title game, and neither would Phillips. But Phillips made it clear how much he relies on the veteran to act as an extension of himself on the field.

"He's pretty proactive about everything," Phillips said. "He's a big personality, so you can't help but be drawn to him. I tell him he always takes the other side. Whatever side you take, well, he's going to argue the other side. You know, that's him. He gets going, he gets excitable about a lot of things, and he's a lot of fun to be around. And he made me drippin' in the Super Bowl, so that was nice."