Back at .500, Ravens have little chance of playoffs 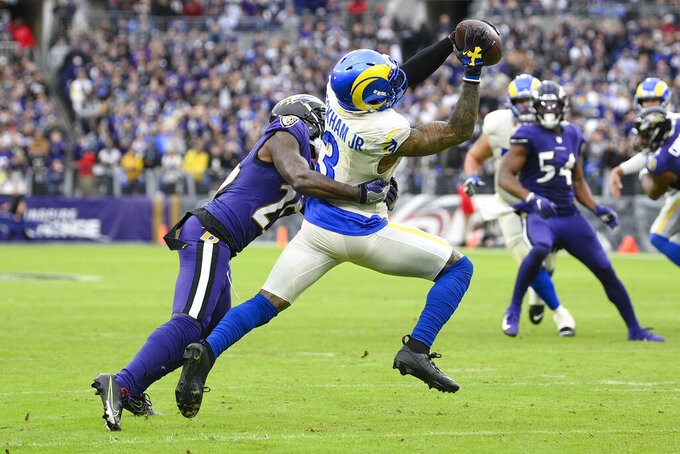 So 8-8 feels reasonable — and unless a lot of things break their way next weekend, they won't be heading to the playoffs.

After rising to the top of the AFC on the strength of several down-to-the-wire victories, the Ravens have dropped five straight as every close game has suddenly gone against them. That's not to say their luck has necessarily evened out this year. Baltimore looked like a potential Super Bowl contender before the season, but injuries have decimated the roster from start to finish and made these last few defeats seem even crueler.

A 20-19 loss to the Los Angeles Rams on Sunday was Baltimore's fourth defeat by two points or fewer in its last five games.

Even if Baltimore beats Pittsburgh next weekend, the Ravens would be eliminated if Indianapolis beats lowly Jacksonville — and that doesn't even fully describe the series of events that would have to occur for the Ravens to make the postseason.

“We don't know how the rest of the league is going to shake out or what's going to happen, but with one game left, we know that we can control what we can control,” safety Chuck Clark said. “We can't control anybody else's win-loss outcome. We've just got to go out next week and do our part and win and control that.”

Star quarterback Lamar Jackson has missed three straight games with an ankle injury. Coach John Harbaugh said he could play this weekend, but after returning to practice in a limited role last Wednesday, Jackson missed the next two.

After entering the game at minus-10 in the turnover department, the Ravens forced three against the Rams. That helped them stay in front for a while, but ultimately wasn't enough.

The Ravens did a lot of what they needed to Sunday. The Los Angeles turnovers helped Baltimore avoid a repeat of the previous week, when Cincinnati's Joe Burrow passed for 525 yards against the Ravens' depleted secondary.

As it has done on several occasions this season, Baltimore put together long drives that sidelined the opposition's offense. The Ravens went 91 yards in 9:00 for a second-quarter field goal. The used 6:23 off the clock before kicking a field goal in the third period. A fourth-quarter field goal came after a drive that lasted 7:39.

The red zone cost Baltimore dearly. The Ravens settled for field goals of 22 and 34 yards in this game, and they never did score an offensive touchdown.

The last field goal with 4:30 remaining came after a crucial delay-of-game penalty knocked Baltimore back after the Ravens had third-and-goal from the 4.

Running back Devonta Freeman had 76 yards on 14 carries, and the running game in general was solid with 165 yards.

Quarterback Tyler Huntley accounted for four touchdowns a couple weeks earlier when he played in Jackson's place against Green Bay. He wasn't as sharp Sunday. An interception near the end of the first half led to the first Los Angeles touchdown — after the Ravens had a chance either to score themselves or run out the clock with a 10-0 lead.

“Tyler will tell you, just an ill-advised throw,” Harbaugh said.

Huntley led a late drive to beat Chicago earlier this season and a late touchdown drive in that game against Green Bay, but after the Rams went ahead 20-19 with 57 seconds left, Baltimore's last-ditch drive fizzled. Huntley completed a couple very short passes in the middle of the field that kept the clock running and may have done more harm than good.

In addition to Jackson, Harbaugh said LB Odafe Oweh (foot) has a chance to play this week.

35 — The number of yards the Ravens lost on five sacks. One of those sacks came immediately after the big delay of game, and another came on Baltimore's final possession and again made the clock run.

Detroit hosts Pittsburgh on Sunday in what could be the final game for Steelers quarterback Ben Roethlisberger.