Barkley staying the course with rehab, pleased with progress 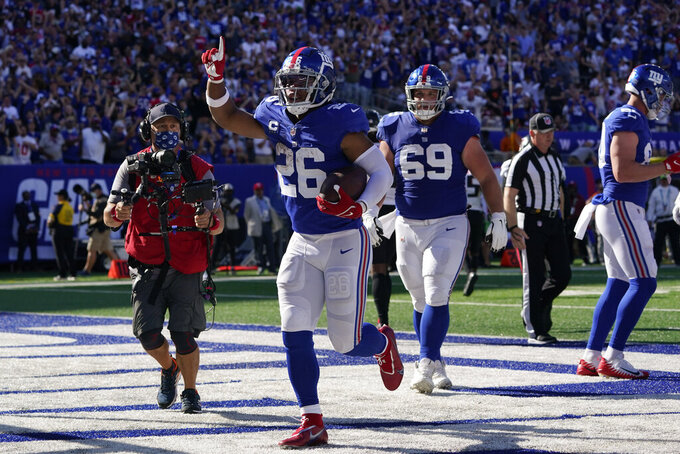 New York Giants running back Saquon Barkley (26) celebrates after scoring a touchdown during the second half of an NFL football game against the Atlanta Falcons, Sunday, Sept. 26, 2021, in East Rutherford, N.J. (AP Photo/Seth Wenig)

EAST RUTHERFORD, N.J. (AP) — Coming off a torn ACL, Saquon Barkley is the first to admit he is not back to being the running back who was the NFL Offensive Rookie of the Year in 2018.

Through three games, the 24-year-old Barkley has 39 carries for 134 yards and a touchdown. He has caught nine passes for 56 yards.

While the numbers are not great, Barkley had reconstructive surgery to repair the injury suffered against the Bears on Sept. 20, 2020. He missed all three preseason games and didn't start practicing with the team fully until after their final exhibition game. His status for the opener was in question until the day of the game.

Barkley said his parents have repeatedly told him to be patient.

That's the approach the Giants (0-3) have been taking. They have been slowly increasing his workload in games. He was on the field for 29 plays in the season opener against Denver. He got 58 plays four days later in a Thursday night game at Washington and then a season-high 60 against Atlanta this past weekend.

His biggest play was a 41-yard run against Washington that flashed signs of the ‘old’ Barkley. It was what fans might have expected to see every play. They wanted a back who could make defenses look foolish.

It rarely happens that way with players the year after a major injury.

“I’m never going to make any excuses,” Barkley said. “The expectation that people have for me is not even close to the expectations that I have for myself, and it never will be for as long as I play football, or whatever I do after football. That’s just my mindset. I’ve got to keep going, I’ve got to keep getting better. My team needs me to be better. I’ve just got to keep trusting my knee and trusting the process.”

Offensive coordinator Jason Garrett said Barkley put the Giants in manageable second-and-third down situations against Atlanta with his runs. Those plays of 4 yards to 7 yards tend to be overlooked by those wanting a series of long runs.

“Saquon Barkley is a hell of a football player and he’s a hell of a football player for lot of different reasons,” Garrett said. “He can attack the defense a lot of different ways. I have tremendous admiration for him, from afar competing against him and then having a chance to be around him. He had a really significant injury last year, and how hard he’s worked to come back and play, and play as much as he has early on in the season.”

The next step will be on Sunday in New Orleans when the Giants face the Saints (2-1).

NOTES: LG Ben Bredeson did not practice for the second straight day because of a hand injury. It looks like the Giants will have a new starter at the position for the fourth straight game. The early favorite is Matt Skura, who was cut by Miami. ... WRs Sterling Shepard and Darius Slayton also didn't practice because of hamstring injuries. It's also unlikely they will play in New Orleans. ... Defensive coordinator Pat Graham has seen his unit give up points on five of seven drives within two minutes of the half. “I think we’ve got to work two-minute today at practice, and that’s what we’re going to do,” Graham said, drawing laughs. “Again, I’m not trying to make light of it. That’s not good enough.”