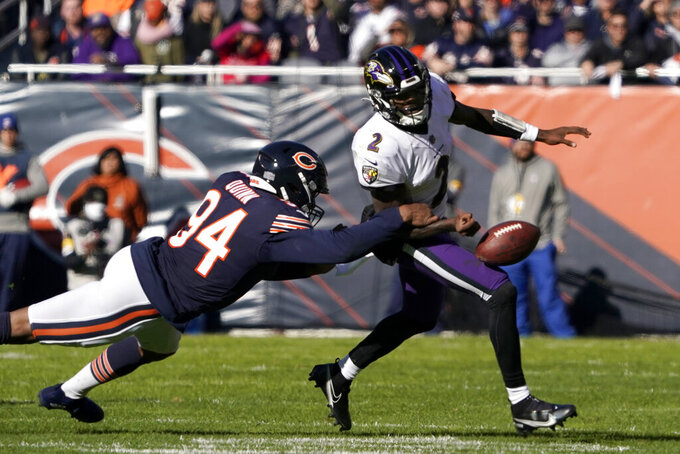 OPENING LINE: Bears by 3, according to FanDuel SportsBook.

TURNOVER DIFFERENTIAL: Bears minus-4; Lions minus-1.

BEARS PLAYER TO WATCH: Andy Dalton. The 11-year veteran QB is starting in place of injured rookie Justin Fields. Dalton filled in for Fields when he hurt his ribs last week. Dalton was 11 of 23 for 201 yards and two TDs against Baltimore. The three-time Pro Bowler started the first two games before going out with a knee injury.

LIONS PLAYER TO WATCH: D'Andre Swift. Even though the Lions do not have another consistent threat on offense, Swift keeps making plays. Swift had a career-high 136 yards rushing last week and has run for 266 yards and a TD over the last two games. He leads all RBs with 53 receptions. The second-year pro has 975 yards of offense, ranking fifth among NFL players at his position.

KEY MATCHUP: Swift vs. Chicago's run defense. Detroit has come close to finally winning the last two weeks, tying at Pittsburgh and losing by three points at Cleveland, because Swift has been able to run effectively. The Bears have given up 100-plus yards rushing in each of their last five losses. The last three times Chicago gave up fewer than 100 yards rushing, it won those games.

KEY INJURIES: Bears WR Allen Robinson (hamstring) may return after missing a game. ... DT Akiem Hicks (ankle) did not practice Tuesday after being out against Baltimore. ... CB Duke Shelley (hamstring) went on IR. ... S Eddie Jackson (hamstring) practiced on a limited basis, taking steps toward playing for the first time since Oct. 31 against San Francisco. ... Lions QB Jared Goff missed the previous game with an oblique injury and coach Dan Campbell was encouraged on Tuesday that he could return to play this week. ... DE Da’Shawn Hand (groin) was placed on IR.

STATS AND STUFF: Chicago has lost five straight under embattled coach Matt Nagy, who said a report that he has been told he will no longer coach the team after Thursday's game is not accurate. ... Chicago had a six-game losing streak last season, then bounced back to make the playoffs as the seventh seed in an expanded field. ... Chicago has lost four-plus games in a row in three straight seasons. ... Nagy is 6-1 against Detroit and 25-26 against every other team in four seasons with the Bears. .... The Bears have never fired a coach during a season. ... Chicago has 31 sacks, tying for the league lead with Minnesota at the start of the week. The Bears had a total of 10 sacks the past two weeks after going two games without one. ... LB Robert Quinn had a career-high 3 1/2 sacks last week, giving him 10 this season after he had just two in 2020. ... Detroit is the NFL’s only winless team and has a 14-game streak without a victory, dating to that December victory at Chicago. ... The Lions have lost three games by three of fewer points and six times by 10 points or less. ... Detroit started playing on Thanksgiving in 1934 with a 19-16 loss to Chicago. The Lions have lost four straight on the holiday and are 37-42-2 overall. ... QB Tim Boyle made his first career start in place of Goff against the Browns and was 15 of 23 for 77 yards with two INTs. ... Detroit has run for 160-plus yards in consecutive games for the first time since 2004. ... The Lions gave up a total of 29 points over their last two games after allowing an average of 30.5 points through eight games.

FANTASY TIP: Start RB David Montgomery. He had 106 yards rushing and two TDs last month against Detroit, which ranks No. 31 in the NFL against the run. Montgomery has scored five TDs in his last six road games.