Bert Bell was more than the father of the NFL draft 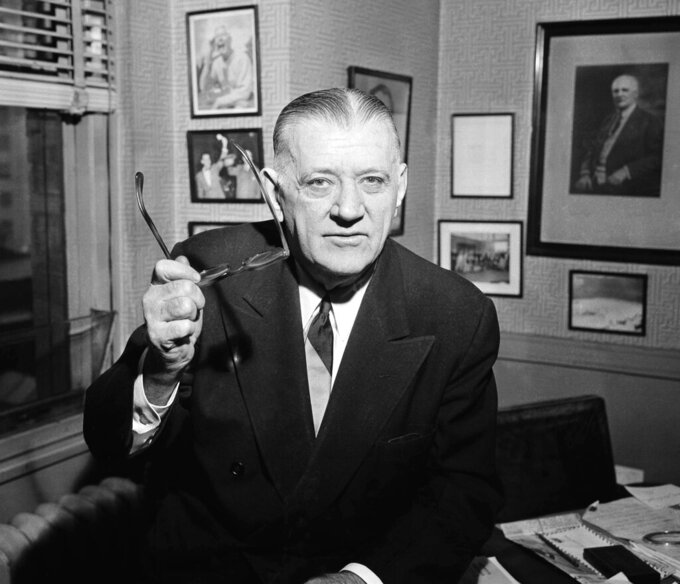 FILE - In this Feb. 13, 1957, file photo, NFL Commissioner Bert Bell gestures in his office in Philadelphia. Bert Bell was not the first NFL commissioner. He was, however, the first to make a major impact on pro football. To call Bell the father of the NFL draft would be accurate. It also would be an incomplete assessment, because Bell was a brilliant innovator who helped carry his league from afterthought to a player among American sports. (AP Photo/Warren M. Winterbottom, File)

NEW YORK (AP) — Bert Bell was not the first NFL commissioner. He was, however, the first to make a major impact on pro football.

To call Bell the father of the NFL draft would be accurate. It also would be an incomplete assessment, because Bell was a brilliant innovator who helped carry his league from afterthought to a player among American sports.

The NFL ranked behind baseball and college football when Bell became the league's second commissioner in 1946. Even boxing and horse racing were more popular.

Bell's love affair with football began when he was captain at Penn, where his son Upton says his dad threw the first pass in Rose Bowl history. Bert Bell then volunteered for the military in World War I, receiving several decorations, before returning to Penn.

According to Upton Bell, his father and mother, an actress and dancer named Frances Upton, bought the Philadelphia neighborhood's Frankford Yellow Jackets as a wedding present for each other. They soon were renamed the Eagles, and Bert Bell began his impactful career as a pro football executive.

In 1935, after being burned by losing college players to other teams in bidding wars, Bell proposed a draft that took effect the next year — and has been copied by pretty much every other sport. Today, the NFL draft has spawned a cottage industry, has become a traveling show as popular as anything the NFL does outside the Super Bowl, and remains a key element to building teams.

Among his other early suggestions that took root in the NFL was a more balanced schedule in which the strong teams played other such squads while the weak played the weak more often. That practice has been carried through the decades and still exists.

"My father was always in favor of poor teams having a chance to catch up quickly," Upton Bell told Ken Rappoport and Barry Wilner in the book "ON THE CLOCK, The Story of the NFL Draft."

Among his peers, Bell was one of the more highly regarded owners even though the Eagles saw little success on the field and economically. When they sought to replace Elmer Layden as commissioner, the owners turned to Bell and elected him unanimously.

He immediately tackled two significant topics challenging the 10-team league: a rival organization, the All-America Football Conference; and the specter of gambling hovering over the sport.

Bell recognized it would take some time before the NFL-AAFC issue could be resolved. So he made his first priority establishing strong anti-gambling conduct codes to prevent scandals that occasionally plagued baseball, boxing and basketball.

Two New York Giants had been approached by a convicted felon seeking to fix the 1946 title game between the Bears and Giants. One, fullback Merle Hapes, was barred from playing in it, while the other, quarterback Frank Filchock, was allowed to suit up. Subsequently, though, Bell suspended each of them indefinitely for "actions detrimental to the welfare of the National Football League and professional football." Neither Hapes nor Filchock ever appeared in another NFL game.

As for the AAFC, Bell had been encouraged by several NFL owners to "crush" the competing league. Bell, however, saw the value in some of the AAFC's franchises, specifically Cleveland and San Francisco. The NFL had only one West Coast team in those years, with the Rams having moved from Cleveland to Los Angeles in 1946. A California partner for them could open up an entire geographic region for the league, Bell reasoned. Given that there now are franchises in Seattle, Phoenix and, soon, Las Vegas, as well as in California, his vision was accurate.

Instead of plotting the total demise of the AAFC, Bell worked a merger after the 1949 season that brought the Browns, 49ers and Baltimore Colts into the NFL's fold. Not only did that bring peace in pro football, it brought Paul Brown into the NFL; some would argue Brown is the greatest coach and game-changing executive in league history.

Bell shrugged at the notion those three franchises would be tailenders in his league, noting "these are strong teams run by strong administrators and coaches, and with very good players."

And in 1950, the Browns won the NFL championship. From 1951-54, the 49ers had winning records. Only the Colts faltered of that trio: They folded after the 1950 season, as did the holdover NFL franchise New York Yankees in 1951.

That made stability something of a problem — the Dallas Texans played only in 1952 before disappearing — but Bell and several team owners worked to secure more reliable (and deep-pocketed) owners, and by 1953, when a new Baltimore franchise entered the league, financial constancy became an NFL staple. No franchise has folded since.

Although his level of achievement in securing broadcast rights fees didn't rival his successors' accomplishments, Bell envisioned the same thing Pete Rozelle, Paul Tagliabue and Roger Goodell did from the outset. He knew a solid and lengthy marriage with television was essential to prominence and profitability.

While he didn't put together a nationwide TV package, Bell did reason that blackouts of home games would help local attendance in a time when an NFL sellout was never a given. So he ordered that only road contests be televised back to home cities, and despite each franchise having its own television deal, that became league policy.

In place of televising a home game, matchups between other teams — often high-profile games — were allowed.

Bell also proposed sudden-death overtime for championship games so as to avoid having co-champions should the title match end in a tie. Such prescience bore fruit when the 1958 NFL championship between the Giants and Colts was, indeed, tied through four quarters.

And it wasn't a mere coincidence that the title game was broadcast nationally, though it was blacked out in New York because it was not a sellout. The NBC telecast drew an estimated 45 million viewers and would be the catalyst to the NFL's mega-presence on network TV.

Bell also was the first commissioner to recognize the NFL Players' Association, which angered every team owner. He simply shrugged and said the union would serve the best interests of the game.

"He was equally trusted by the media, the players and the owners," Upton Bell said in ON THE CLOCK. "You would never get that again. I don't know any commissioner today that is trusted by everyone. When was the last commissioner that actually played the game? Any sport? Did anyone play the game, own a team, and become commissioner? Bert Bell understood it from every level."