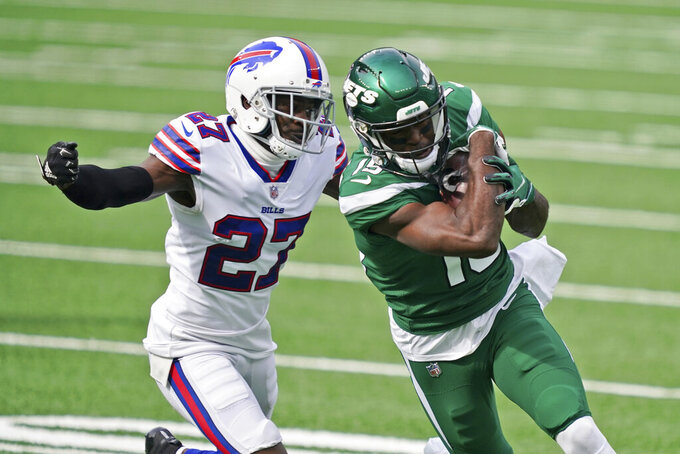 ORCHARD PARK, N.Y. (AP) — Buffalo Bills cornerback Tre’Davious White was happy to bid Tom Brady good riddance once he departed New England and the AFC East for Tampa Bay this offseason — with but one slight regret.

Difficult as it was to spend his first three seasons facing the Patriots' Brady-led offense twice a year, White lamented how he never beat Brady.

“Yeah, that’s something that’s bothering me,” White acknowledged as the Bills (5-2) prepare to host the Patriots (2-4) on Sunday. “But I don’t miss him in the division.”

Brady owned the Bills during his 19 seasons as New England's starter, in which he went 32-3 to set the NFL record for most wins against one opponent.

Now it’s time for Buffalo to brace for a completely different run-oriented, play-action attack with Cam Newton behind center — although a spotty offense so far.

White doesn’t discount Newton’s abilities, especially how he uses his 6-foot-5, 245-pound frame to overpower defenders. And yet, White noted, what Newton lacks is the 19 years of familiarity Brady had with division and the Patriots' playbook.

“It was a lot put on our plate because with Tom Brady, every defense we were in, he already knew what to do,” White said. “So with Cam coming in his first year, I don’t think that playbook is so big. So I think that kind of limits the things that they’re doing and all the stuff we have to prepare for.”

That remains to be seen in a what’s been a distinctly one-sided rivalry favoring the Patriots, who are 35-5 against the Bills since coach Bill Belichick took over in 2000.

While Buffalo is off to its second consecutive 5-2 in start, the Patriots resemble a shell of a team that’s won 17 division titles and six Super Bowls under Brady.

The Patriots have lost three straight, their longest skid since 2002, and coming off a 33-6 loss to San Francisco, New England’s most lopsided defeat at home under Belichick. Just as concerning is Newton’s sudden struggles in two games since returning from the reserve/COVID-19 list.

His 39.7 quarterback rating last weekend was the third lowest of the 2015 NFL MVP’s 10-year career, and he’s gone a combined 26 of 40 for 255 yards with no touchdowns and five interceptions in his past two starts.

“Losing is not acceptable in this locker room,” Newton said, before referring to himself in the third person. “So, Cameron Newton, you need to pick your expletive up. That's what I’ve learned.”

THE BOOK ON CAM

Newton is no stranger to numerous Bills coaches and players who have ties to the quarterback from his days in Carolina. They include coach Sean McDermott, the Panthers' former defensive coordinator, and defensive end Mario Addison, who have provided tips on how to defend against Newton.

Addison, an offseason free agent addition, circled this game on his calendar once Newton signed in New England.

“Hell yeah. I’ve got to add Cam to my sack list, man,” Addison said in August. “At practice, I couldn’t get too close to him. So now it’s time for me to capitalize.”

Patriots safety Devin McCourty has known only dominance during his previous 10 seasons in New England. But he’s not naïve to Buffalo representing a major threat to ending New England’s run of 11 straight division crowns.

If that makes the Patriots the underdogs, so be it.

“We’d be crazy to think coming into the game that we’re the team to beat. Like, they’re No. 1,” McCourty said. “Our backs are against the wall.”

Teams haven’t shied away at throwing the ball in the direction of Patriots cornerback and reigning Defensive Player of the Year Stephon Gilmore. After making a career-best six interceptions and 20 pass breakups in 2019, the 30-year-old Gilmore has just two pass breakups and one interception so far this season.

Belichick declined to address a recent report of Gilmore possibly being on the trade block with two years left on his $65 million contract. But he said Gilmore’s preparation hasn’t changed this season.

“We’ve changed up what he does based on our game plan and who we’re matched up against, the team we’re playing that particular week,” Belichick said. “But, he’s a very flexible player that understands what we’re trying to do and how it all fits together, and works hard to do his part in it.”

With fans not allowed at Bills Stadium, Patriots players are going to miss the annual cold welcome they get from Buffalo fans, who call themselves the Bills Mafia.

“Even though it’s against you, it’s an awesome football environment,” McCourty said. “I’ve had some pretty, pretty cool experiences just being in that stadium and walking away with wins sometimes, and even some tough losses we’ve had there.”

The forecast for Sunday features rain and 21 mph winds, which could play havoc with the passing game.

“Yeah, I’m down for whatever, rain, snow, sun,” Bills linebacker Matt Milano said. “Definitely makes them a little bit one-dimensional as far as running the football. But this day and age, I think you’ve got to be ready for anything.”