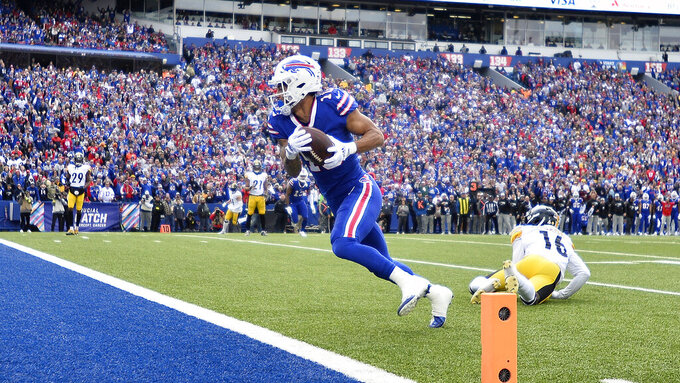 Buffalo Bills wide receiver Khalil Shakir (10) carries the ball into the end zone for a touchdown after catching a pass from quarterback Josh Allen and getting past Pittsburgh Steelers cornerback Josh Jackson (16) defending during the first half of an NFL football game in Orchard Park, N.Y., Sunday, Oct. 9, 2022. (AP Photo/Adrian Kraus)

BUFFALO, N.Y. (AP) — The deadline to complete negotiations for the Buffalo Bills to build a new $1.4 billion stadium has been pushed back to at least December in order for the state to finish the environmental impact study.

The new deadline, moved for a second time over the past six weeks, will be 30 days after that study is received, according to a joint statement Friday from the Bills and state and county governments.

The parties said they are making “considerable progress” to finalizing the agreement, with plans still on track to break ground on the new facility next year. The original deadline of Sept. 1 was pushed back 45 days.

The framework of the deal, which carries an NFL-record $850 million taxpayer price tag, was reached in March. Numerous contractual details need to be negotiated, including the terms of a 30-year lease and a community benefits package, which is to be funded by the Bills.

The new stadium will be built in Orchard Park across the street from the Bills' Highmark Stadium, which opened in 1973. The cost to make further renovations and structural upgrades to the current stadium were deemed too expensive.