Bills praise Alexander, who could be playing final home game 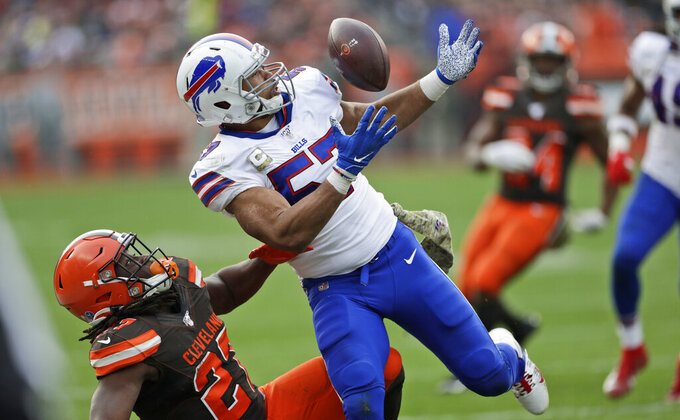 FILE - In this Nov. 10, 2019, file photo Buffalo Bills outside linebacker Lorenzo Alexander (57) breaks up a pass intended for Cleveland Browns running back Kareem Hunt (27) during the second half of an NFL football game in Cleveland. Vowing to retire after this season, the 13-year NFL veteran knows Sunday's regular-season finale against the New York Jets won't be his final game for the playoff-bound Bills. (AP Photo/Ron Schwane, File)

ORCHARD PARK, N.Y. (AP) — Bills defensive coordinator Leslie Frazier opened the final week of the season in a bittersweet mood, and it had nothing to do with Buffalo having lost at New England two days earlier.

What struck Frazier was the realization his time coaching linebacker Lorenzo Alexander was potentially coming to a close. Though the playoff-bound Bills (10-5) are guaranteed an AFC wild-card game after closing the regular season against the New York Jets (6-9), the game Sunday could very well be Alexander's home finale. The 13-year veteran has said he plans to retire following the season.

"I was telling one of our coaches this morning that if this indeed turns out to be his last home game or last season, there may be someone else that'll play the position next season, and they may wear the same number," Frazier said. "But there won't be another Lorenzo Alexander."

Frazier's praise for Alexander goes beyond the 36-year-old's production. Alexander has played half of Buffalo's defensive snaps and ranks third among the Bills with 218 special teams snaps. But his presence as an unquestioned leader has Frazier using him as a what he called "a sounding board to gauge the temperature of our defense."

"The players look up to him. The coaches trust him," Frazier said. "It's hard to find a guy like that. We're going to miss him."

If this is indeed his final season, Alexander suddenly isn't saying.

The usually outgoing and talkative player, known for holding half-hour weekly sessions with reporters at his locker, was a curious no-show following practice Tuesday. Alexander also declined an interview request from The Associated Press on Monday, leaving it difficult to determine whether he's had a change of heart about retirement.

Alexander first said he believed he had one more year left in him at the end of last season, something he reiterated weeks later after being re-signed to a one-year contract.

"If you asked me today, yeah, this is my last year," the married father of four said in mid-January. "At some point you've got to eventually walk away from the game and start the second half of your life. I've got a lot of life to live. There's other things that I want to do."

If anything, Alexander continues proving he's capable of playing a regular role.

He ranks sixth on the team with 50 tackles, has two sacks and is tied for the team lead among linebackers with nine passes defensed in 15 games, including seven starts.

Alexander has also proven durable. He hasn't missed a game since 2013 with Arizona, when he sat out the final 13 games with a right foot injury.

He's completing his fourth season in Buffalo, after being initially signed to fill a special teams role in 2016. It took only a few months for then-coach Rex Ryan to discover Alexander's full capabilities by having him replace starter Manny Lawson.

Alexander's presence has also be felt in the community, where he's active in fundraising activities for his ACES charitable foundation. Including this season, he's a five-time Walter Payton Man of The Year award nominee.

“He's been everything, that guy, not just team, but to this community,” safety Micah Hyde said. “Everybody appreciates ’Zo around here.”

“You can't really put into words what he means to this team,” quarterback Josh Allen said. “He does things the right way and he's been an inspiration for a lot of people here.”

At 6-foot-1 and 245 pounds, Alexander's career has been a testament to his hard work and versatility.

He was a 300-pound defensive lineman coming out of California in 2005, when Carolina signed him as an undrafted rookie free agent. Alexander briefly switched to tight end before being converted to linebacker upon making his NFL debut with Washington in 2007.

"Guys get drafted on height, weight and speed. And then you have the Lorenzo Alexanders of the world who defy all those numbers," Frazier said. "To have the type of career he's had, it's an incredible story. And it speaks to being able to look beyond the raw numbers."

Alexander is set to play his 191st career game Sunday. He has also made four postseason appearances, all of them losses.

"I wouldn't mind if he did change his mind," Frazier said. “I'm sure his wife might have other things to say, but I'd love to have him back.”

NOTES: With the Bills locked in as the AFC's fifth playoff seed, coach Sean McDermott plans to rest some starters against the Jets. Without saying who, McDermott acknowledged the possibility of Allen playing a portion of the game before giving way to backup Matt Barkley. ... The Bills were not required to issue an injury report, but running back Devin Singletary was among the players who did not practice. ... C Mitch Morse practiced after being sidelined Saturday with a lower right leg injury.